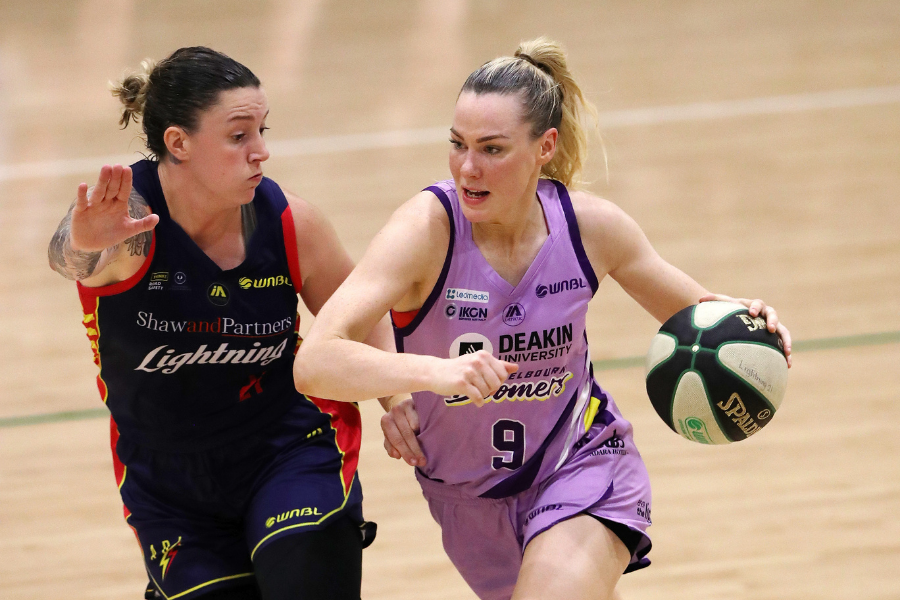 The Deakin Melbourne Boomers four-game winning streak has come to an end, with a loss against Adelaide Lightning, at the Adelaide’s home court.

Despite Ezi Magbegor getting the first shot of the night, Adelaide’s Alanna Smith was able to quickly respond.

Both teams were evenly matched, although Melbourne had a series of missed opportunities and were unable to convert from the perimeter, as well as inside, in the first quarter.

The Lightning also brought the heat to Lindsay Allen as they double teamed the point guard on numerous occasions to stop the Boomers offensive transition. Adelaide ended the first term with a strong lead, 20 – 8.

Adelaide was able to maintain their scoreboard lead in the second term as they continued to capitalise on opportunities, whilst Melbourne struggled from the outside perimeter – 0 from 12 from the three-point line. Although Allen fired up with a three pointer towards the end of the second quarter and continued to show her offensive aggression.

In the last two minutes of the first half, Melbourne was able to gain momentum as they were hitting open shots and increased movement to get inside looks. As a result, edging their way back into the game, reducing Adelaide’s lead to 5 points at half time (29 – 34).

Momentum continued into the third quarter as Cayla George and Magbegor started Melbourne off with an inside look, capitalising on the talls’ connection.

Adelaide began to lack transitional defence whilst Melbourne came out fired up, pushing the ball, and establishing looks inside. Both teams provided increased intensity in the third term as they were going bucket for bucket in the last two minutes.

Tiffany Mitchell brought some heat to the game with a strong reverse layup and provided fast break opportunities. Melbourne ended the third term with the upper hand, 50 – 47.

Adelaide’s Samantha Simons started the final quarter with a three pointer, her third of the night. Both teams struggled to score as they were both aggressive in defence, forcing each other to work hard to get on the board.

Despite the defensive pressure, Adelaide was able to capitalise on scoring opportunities whilst Melbourne was unable to quickly respond.

Adelaide scored 19 to 3 in the final term against Melbourne and were able to walk away with a home court win. Final score, 65 – 53.

Allen ended her night with 14 points, 6 rebounds and 3 assists, whilst George finished with 8 points, 10 rebounds and 7 assists. Magbegor was also able to walk away with 15 points, 9 rebounds and 1 assist.

Despite the loss, the Boomers will bounce back for their next clash against the University of Canberra Capitals on January 8th at their home away from home, Gippsland Regional Indoor Sports Centre.