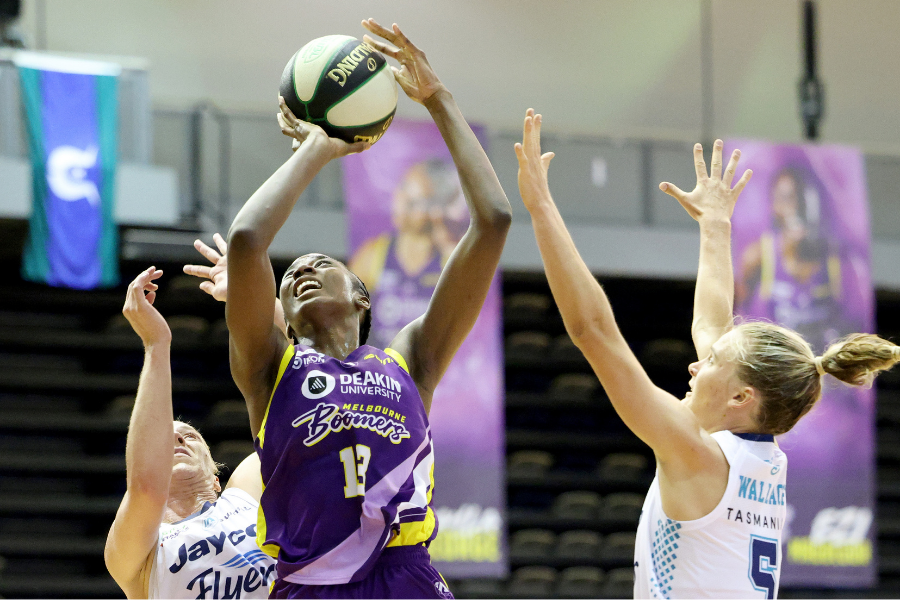 The Deakin Melbourne Boomers came back from a 16-day break with a pulsating win against the Southside Flyers.

Both sides started the night off tentatively as Southside’s Bec Cole fired up, walking away with 10 points in the first term.

Melbourne struggled to find their rhythm as Southside utilised zone defence, which proved to cause problems for the Boomers side. Penina Davidson started the scoring for the night, although with a quick response from Cole.

The first term showed Tiffany Mitchell’s connection with the talls, in Cayla George and Davidson, inside the key back-to-back. There was end-to-end pressure from both teams as Abby Bishop executed a right-handed layup with Lily Scanlon providing a three-point response for Melbourne. The Boomers led the first term by two points, 19 – 17.

Southside brought the heat in the second term as they dominated the scoring with a game high 8-point difference within the first 2 minutes. Mitchell was able to break the 8-point lead with a shot from the arch.

Despite this break in Southside’s momentum, the opposition proved to have better player movement than Melbourne. Cole continued her hot start to the game, ending the first half with 17 points. Lindsay Allen fired up in the second term with a three pointer in hope of breaking the Flyers’ momentum.

Despite looking hopeful, Southside proved the better team as they provided quick responses and achieved easy transitional baskets, outscoring Melbourne by nine. As a result, Southside ended the first half with a seven-point lead, 39 – 32.

The second half required Melbourne to bring the energy and fire up. George started the Boomers’ side off with a long range two-point shot. Mitchell followed the captains’ score with a driving layup, showing Melbourne’s aggressive approach in the third term.

Southside were unable to respond which led to a Mitchell and Ezi Magbegor connection in the key.

As Melbourne were regaining their rhythm, Bishop stopped the run of scoring to wrestle back some Southside momentum. Turnovers were high for both teams 4 minutes into the third quarter, 10 for Melbourne and 11 for Southside.

Mitchell continued to bring the heat with back-to-back driving layups with one from a turnover and drawing a foul at the arch, for a three-point play at the foul line.

Both teams were able to turn it up offensively although momentum stayed with Melbourne. The Boomers came back from seven points down at half time to leading by six at the end of the third term, 55 – 49.

Southside came out firing at the beginning of the final, withholding Melbourne from scoring within the first three minutes. Both teams fired up at the arch as there was back-to-back threes from Izzy Wright which were quickly responded to by Southside’s Maddison Rocci.

With five and a half minutes to go, Southside led by one point at the timeout.

George continued the three-point feud with a clean look from the perimeter. Mitchell also got in on the final term’s three-point action with a shot over Kate Gaze’s hand, rolling into the basket.

Melbourne had possession with a minute and a half left, as Mitchell shot a deep two. Southside were able to keep the scoreboard pressure with quick responses, although the Mitchell and Magbegor connection proved strong – giving Melbourne a three-point lead with thirty seconds left.

With ten seconds remaining, Southside regained possession as a double dribble was called on Mitchell. The Flyers needed three points to tie the match, Cole shot from the perimeter in the dying seconds and was unable to make the basket.

The Boomers will be fired up for their clash against Perth Lynx on Monday 17th at the Selkirk Stadium – click here for tickets.