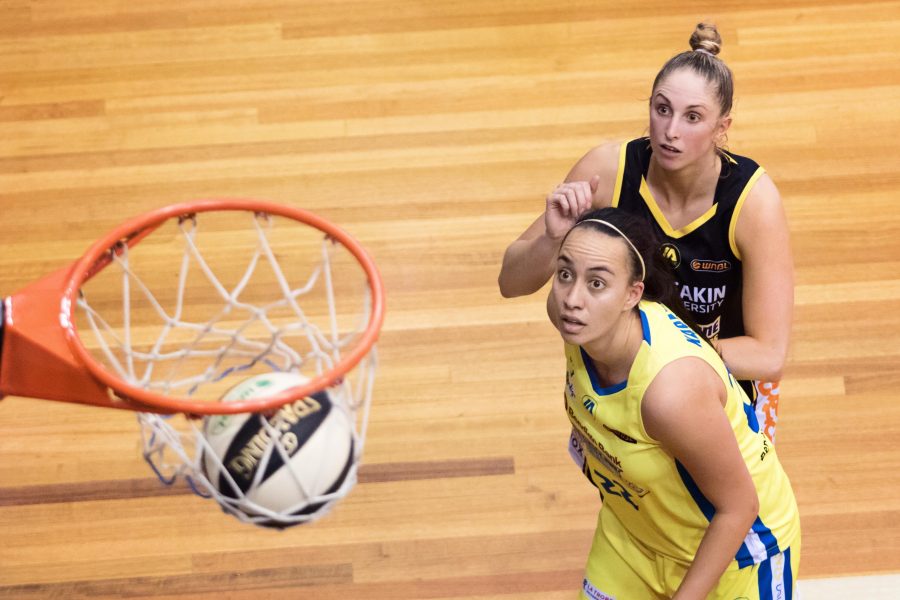 All Smiles For Boomers In Geelong

The Melbourne Boomers have put together their finest performance of the short WNBL season thus far, leading from start to finish in their 90- 63 rout of the Bendigo Spirit at The Geelong Arena.

Playing against a depleted Spirit side, who were without key players Kelsey Griffin and Gabe Richards, the Boomers capitalised on their size advantage through the entire 40 minutes.

Star Boomer Liz Cambage was in fine form dominating throughout, ending with 25 points, and 14 rebounds and four blocks.

Bouncing back from their first loss of the WNBL season last week, the Boomers hit the court hot.  A few early baskets from Cambage got the Boomers off to a strong start. While newly signed Kalani Purcell played a key role for the Boomers early on, working with Cambage to put points on the board and settle the team into the match.

Defensive pressure from Britt Smart and Monique Conti allowed the Boomers to continue to push out their lead. By half time, the Boomers had racked up a stunning 20 point lead.

Boomers came out of the main break ready and firing. Learning from their rough match against Townsville last week, the Boomers continued to sink baskets.

Maddie Garrick put her best shooting on display in the second half, while O’Hea continued her impressive form from last week, ending with seven rebounds and five assists.

By the end of the third quarter the Boomers had well and truly run away with the game, nearly doubling their score in the 10 minutes.

Young stars Ash Grant, Casey Burton and the recently re-signed Monique Conti all got some good minutes in, pushing the Boomers further in front in the final quarter.

A late push from the Bendigo Spirit wasn’t enough to close the 30 point margin, with the Boomers taking the win, 90 – 63.

The victory marked the debut of youngster Peri Kalka, as she took to the court in her WNBL debut.

The Deakin Melbourne Boomers now turn their focus towards Canberra, as they hit the road this weekend to face the UC Capitals on Sunday (3:00pm tip-off).

Meanwhile, Boomers fans can catch the Deakin Melbourne Boomers back at the State Basketball Centre next Saturday 21 October when they face the Perth Lynx.

Tickets are available at trybooking.com/BOOMERS.