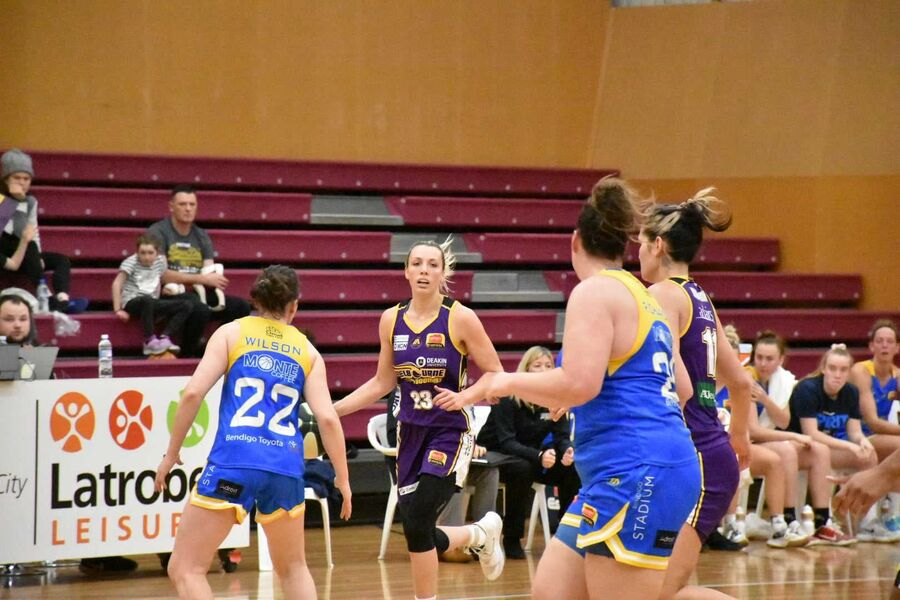 Spirit too strong for Boomers in a nail biter

Despite a superb comeback from the Deakin Melbourne Boomers in the last quarter, the Bendigo Spirit were able to hold on to a game long lead securing the win by two points 64-62 in the WNBL pre-season clash at Traralgon today.

A depleted Boomers could only field a team of eight for the game, the toll of exhibition matches in the previous days catching up with them, four players sitting on the bench with injuries.

Both teams were slow to get out of the blocks, but it was Bendigo who were first on the scoreboard, Kelly Wilson nailing a jump shot. Maddie Garrick came out strong for the Boomers, hitting the first six-points, and Stella Beck controlled the pace in the final moments, ensuring the Boomers took the final shot, driving strongly and scoring with 1.7 seconds on the clock. But it was Bendigo who controlled the quarter, leading for the duration, heading into the break with a two point lead 14-12.

Coming out of the quarter break the Spirit were dominant. Tessa Lavey drained a triple and a two pointer, followed by a sweet turn-around jumper from Wilson to stretch the lead to nine. Gabe Richards chimed in with a strong move to the bucket, Carly Ernst was fouled and hit both free throws, Lavey hit another jumper, and Becca Tobin went to the line successfully, and the lead was out to 17.

It took the Boomers seven minutes to get on the scoreboard, the drought eventually broken by Penina Davidson with a nice close range bucket.

The quarter ended with a three-pointer from the corner by Spirit import Marte Grays, the lead extending to 18, 34-16.

The teams traded baskets for the next few minutes, but it was good ball rotation from the Spirit giving them a couple of close range shots which saw them extend the lead to 16.

Garrick then turned up the dial for the Boomers, almost single handedly keeping them in the game, with 14 for the quarter, the Spirit leading 50-39 with one term remaining.

Davidson opening the scoring for the Boomers in the final quarter with a great turn around from the block. Grays responding almost immediately for the Spirit with two quick buckets.

A timeout with 6-minutes remaining gave the Boomers a bit of spark, Farnworth hitting a triple, and local Chelsea D’Angelo getting an easy layup. Garrick then hit a jumper, and the lead was back to eight with five minutes remaining. An assist from George caught Farnworth on the cut, nailing the shot and getting to the foul line. The lead back to five.

D’Angelo then made a strong drive to the bucket, making the two and drawing the foul, closely followed by a huge three pointer.

With two seconds remaining the Spirit were up by two. Boomers had the throw in from the quarter court, and executed beautifully, getting Farnworth open for a clear 3-point shot to win the game, the ball rolling around the rim and falling out as the buzzer sounded.

The teams are meeting in both Round 1 and 2 of the WNBL 2019/20 season. Tickets available soon.

Don’t miss a minute of the action this season – get your membership today.