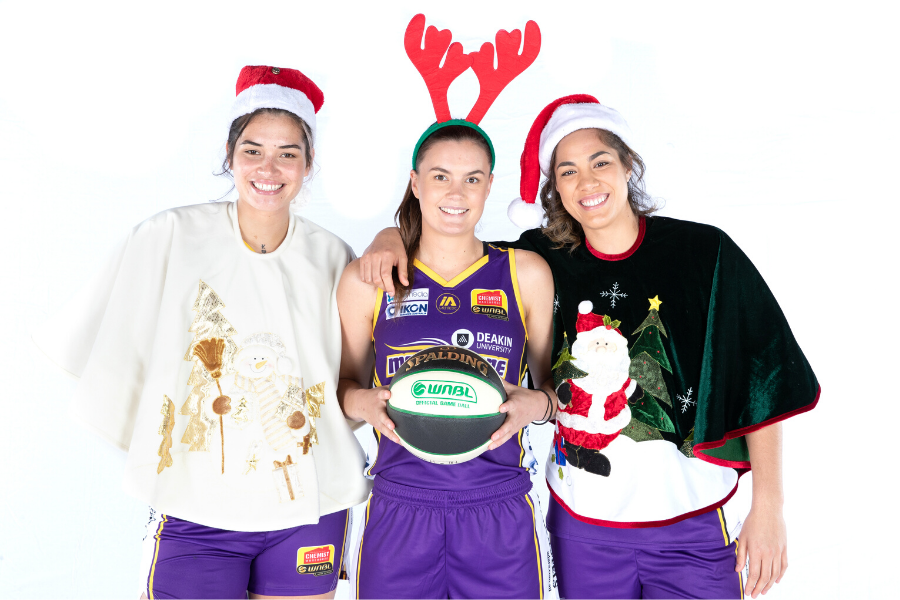 ‘Twas the Sunday before Christmas, when all through the week;

The Boomers worked hard, for the win that they seek.

With the stakes getting higher, as finals draw close.

The purple power want the WNBL championship the most!

As Boomer fans fill the stadium with loud roars and much cheer;

With four double-doubles Cayla George is a star;

Come see Sophie Cunningham who has come to play from afar.

And Lindsay Allen will be there, shooting the lights out all night;

When Monique Conti takes the court, the crowd’s excitement ignites!

A Boomers spectacle is expected, nothing else can compare;

You won’t want to miss it, make sure you are there!

With eight wins on the board so far this season,

Come join the fun and if you need one more reason;

The children who bring a present for the Whitelion tree;

Will be jumping for glee, as entry for them to the game will be free!

Juniors who place a gift under the Whitelion tree, will get to come watch the game for free!

Need a last minute Christmas gift? Merchandise will be available at the game.

Maddie Garrick – the co-captain has been putting on a strong display this season and has the second highest three-points made tally count with 29 buckets beyond the arc in the first nine rounds.

Ezi Magbegor – Shooting at an impressive 50% from the field and a season tally of 64 rebounds, 18 assists, 11 steals and 14 blocks, Magbegor has been growing strength in all areas of her game this season.

Adelaide Lightning
Brianna Turner – In their round nine clash against Bendigo, Turner made a double-double, scoring a match high 23 points and 13 rebounds.

Stephanie Talbot – the ex-Boomer nearly made a triple-double against Bendigo in round nine, hitting 17 points, 10 rebounds and nine assists.

This game will be broadcast by Fox Sports and also streamed to Kayo.

Next up the Boomers host the Townsville Fire on December 27th at the State Basketball Centre.