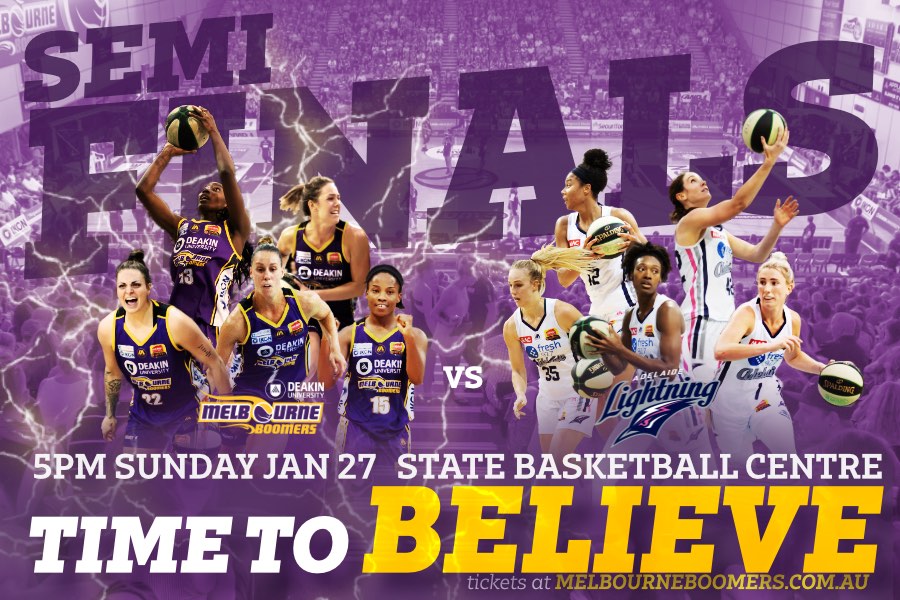 The Deakin Melbourne Boomers will host the Adelaide Lightning in a Semi-final blockbuster this Sunday at the State Basketball Centre from 5pm.

Over 3,000 passionate fans are expected to flock to the SBC for Game 1 of the 2018/19 WNBL Chemist Warehouse Semi-Finals Series.

Fans are strongly advised to pre-purchase tickets online HERE as only a limited amount will be available to buy at the door on game day.

The second-placed Boomers have stormed their way into the finals with four victories in the last five games, including most recent back-to-back wins to end the regular season.

The Boomers also hold a clean series sweep over the third-placed Lightning and are in strong form to notch up another win in what will be their most important match-up so far to date.

However, if their home-and-away season battles are any guide, you can expect another close tussle between the two of the league’s fiercest sides on Sunday night.

EATING: An outdoor BBQ and full canteen facilities will be available from 4pm.

BROADCAST: The game will be televised LIVE by Fox Sports (ch.506).

Maddie Garrick: Garrick played an outstanding game in the Boomers victory against the Rangers last round. She finished with a career-high 28pts on 10-13 shooting & 6-9 beyond the arc!

Ezi Magbegor: The Australian Opal continued her great form in the late stages of the regular season, with another solid performance in the Boomers Round 15 game ending with 12pts, 6rebs and 3asts.

Nia Coffey: Coffey has enjoyed a stellar season having chalked up four WNBL Team of the Week selections. In the previous match-ups with the Boomers this season, Coffey has been the highest team-scorer across each three games.

Kayla Alexander: The WNBA import has relished her first season with the Lightning. In Adelaide’s latest victory over Perth, she finished with 17pts and 9rebs for the game.

The Boomers will release a special 2018/19 Finals T-Shirt and also a Finals Poster – both will be on sale at the game.

Come on court and meet the team post-game! All the Boomers players will stay on court for up to 45 minutes at the end of the match with thanks to ANZ! Dexter the mascot will also be there to say hello!

At the game? Tag us in your favourite basketball photos using the hashtags #BelieveInBoomers, #BoomersFamily and #TimeToBelieve.

Game 1 of the Semi-finals is being televised LIVE on FOX Sports Australia channel 506 from 5pm.

Following the first final at home, the Boomers will travel to Adelaide for Game 2 of the Semi-Final Series on Thursday Jan 31 at 7:00pm (Melb time). Boomers members and fans are encouraged to watch the game on the big screen at Wantirna Club.