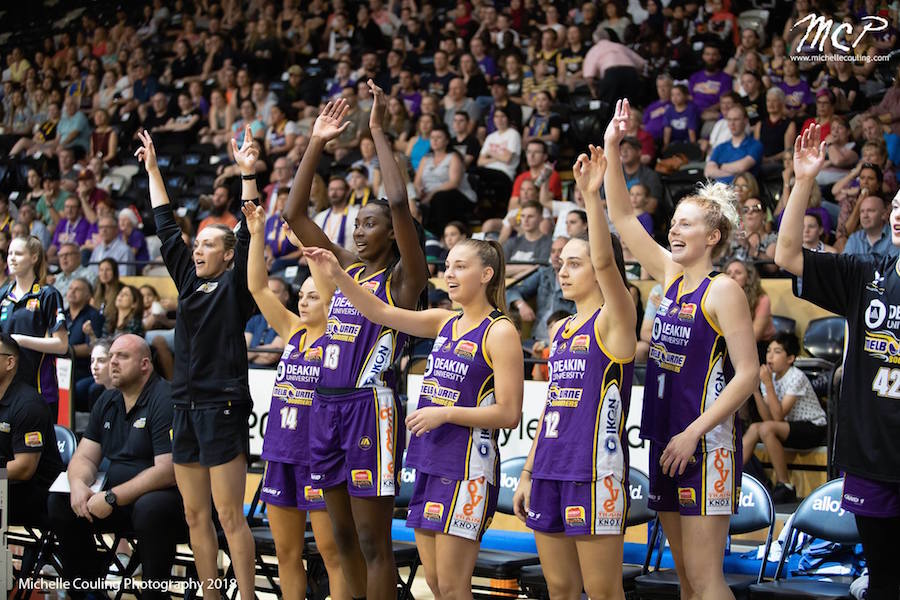 THE DEAKIN MELBOURNE BOOMERS will play their final home game of the regular season when they host Perth Lynx for an important top-four clash this Friday at the State Basketball Centre from 7:30pm.

The Fan Appreciation Night is all about celebrating the fans who have supported the club this season. The game also doubles as a farewell for Boomers GM Justin Nelson before he heads to his new role with the NZ NBL at the season’s end.

Last time they met, the Boomers ended the Lynx’s six-game winning streak with an impressive 20-point victory over in the West. With two of the league’s best three-point shooting teams battling it out, the match-up is set to be an exciting game with a lot of fast breaks.

Tip-off is at 7:30pm and General Admission tickets are available to purchase at the door from 5:30pm, while Reserved Seats can be booked online. All tickets are the same price either way.

Following a huge overtime win last round, the Boomers remain in the top-two on the WNBL ladder with a 12-5 record.

The State Basketball Centre is air-conditioned and will be the perfect place to beat the heat.

TICKETS: General Admission at the door or Reserved Seating can be purchased online HERE.

BROADCAST: The game will be livestreamed by Deakin University at www.foxsports.com.au/live.

We would love to see all our Clubs & Associations come along to our last home game! You can save some money by taking up our group booking option that offers great discounts on tickets.

Ring in the new year by getting your hands on some Boomers merch at the Club’s online store or at Friday’s game from 5:30pm until half an hour after the game. To celebrate Fan Appreciation Night, all tees at the game are on special for $20!

Lindsay Allen: Allen has claimed her fifth entry in the Team of the Week in her debut WNBL season after delivering another huge performance against the Spirit in Round 12. Allen dropped 27pts for the second game in a row, while also nailing the big triple on the buzzer that sent the game into overtime.

Cayla George: Adding another significant achievement to her already bulging basketball resume, George has moved to third place on the all-time list of rebounds in the WNBL after finishing wi1th 16rbs for the game against Bendigo.

Asia Taylor: Taylor has been named in the WNBL Team of the Week four times this season and leads the leagues point scoring averaging 20pts per game.

Brittany McPhee: McPhee had another strong performance in the Lynx’s most recent game finishing with 12pts, 4rbs and 3asts. McPhee also ranks second in her team for total points and rebounds this season.

Come on court and meet the team for the final time this season. All the Boomers players will stay on the court for up to 45 minutes post-game with thanks to ANZ! Dexter the mascot will also be there to say hello!

The Boomers have 81 partnering grassroots clubs and associations supporting the team in the WNBL 2018/19 season. Those featuring in Sunday afternoon’s game include;

At the game? Tag us in your favourite basketball photos using the hashtags #BoomersFamily and #TimeToBelieve.

The game is being livestreamed by Deakin University www.foxsports.com.au/live.

Following Fan Appreciation Night, the Boomers will head on the road to finish the regular season with another game against Perth (Jan 10), followed by Adelaide (Jan 12) and Dandenong (Jan 19).