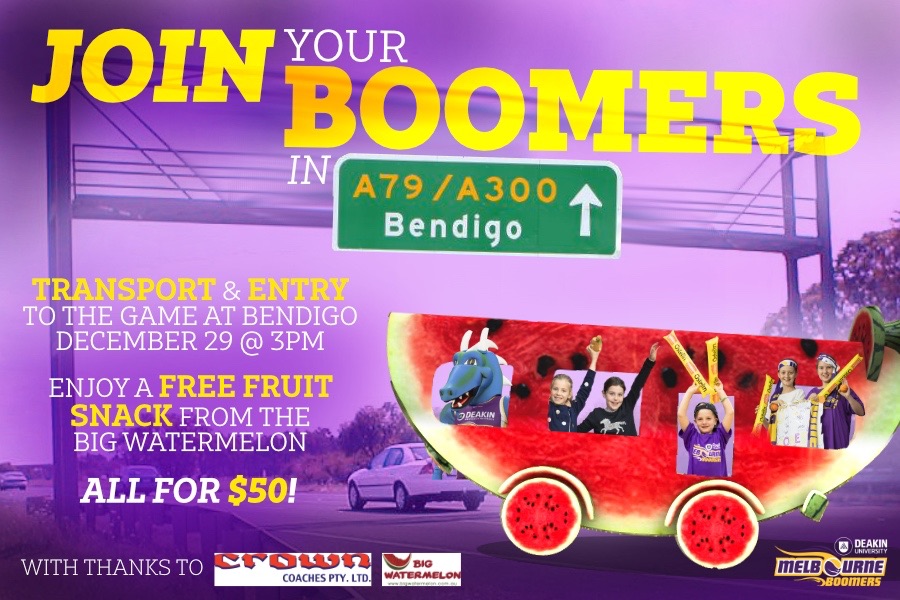 THE DEAKIN MELBOURNE BOOMERS will take on the Bendigo Spirit in an end-of-year blockbuster at Bendigo from 3pm this Saturday.

Boomers Captain, Jenna O’Hea will also celebrate her 250th WNBL game on Saturday afternoon – an impressive milestone for the skipper in what has been a hugely successful basketball career to date.

The Boomers have a special offer for fans this round, with transport, free fruit and entry to the game all for $50. Tip-off is at 3pm and tickets can be booked here ONLINE

As the new year approaches, join us in congratulating Jenna on her milestone and venture to Bendigo with the Boomers for their final game of 2018. The in-form Boomers will enter the game eager to get their first win over the Spirit, following two close losses this year.

TICKETS: The $50 transport and entry offer for Boomers fans can be purchased online HERE.

BROADCAST: The game will be televised live by Fox Sports and SBS.

There’s still plenty of Boomers merch to grab before the new year! Stock up at the Club’s online store.

Steph Talbot: Talbot made the most recent Team of the Week after her Round 11 performance where she finished with 22pts for the game – including four treys. Talbot has scored 197pts for the season, making her the third highest Boomers scorer this year.

Lindsay Allen: Allen nailed 27pts in the Boomers latest win and was the highest scorer on court. She also topped this off by leading the assists, finishing with four for the game.

Becca Tobin: Tobin led the Spirit to end their six-game losing streak which also got her an inclusion in the Team of the Week. Tobin scored 16pts and held 15rebs for the game to give the Spirit the edge in their latest victory.

Nadeen Payne: Payne produced a stellar performance in the Spirts victory against the Fire last round, finishing with 21pts for the game.

The Boomers want YOU to join us at the game in Bendigo! Thanks to Crown Coaches and the Big Watermelon the Boomers are offering transport, free fruit and entry to the Bendigo game all for $50. Seats are limited – book online HERE

At the game? Tag us in your favourite basketball photos using the hashtags #BoomersFamily and #TimeToBelieve.

The game is being televised live by Fox Sports and SBS.

Following the game in Bendigo the Boomers will head back home for their final home game of the season in the Fan Appreciation Night on Friday Jan 4 at 7:30pm. Up against the Perth Lynx, tickets are available online (reserved seats) HERE.