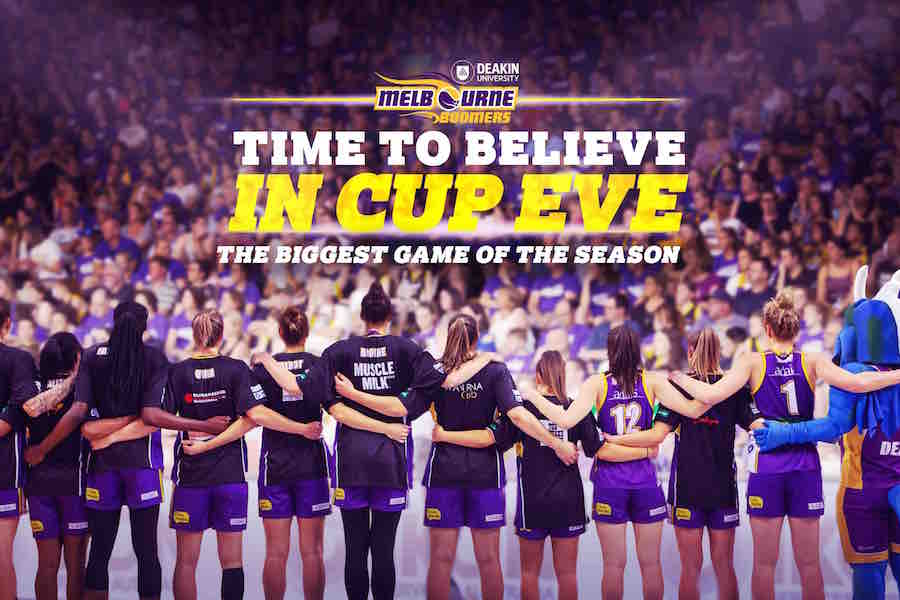 THE DEAKIN MELBOURNE BOOMERS will play two games this Melbourne Cup weekend, fronting up against Dandenong on Saturday, before returning to the State Basketball Centre for a Cup Eve clash with Bendigo.

Saturday’s game will take the Boomers to Dandenong Stadium for a 3pm tip-off, the game set to also be shown live on Fox Sports and SBS.

Over the last few years Cup Eve has turned into one of the league’s biggest games, supported by huge crowds eager to get their fix of WNBL ahead of Tuesday’s public holiday for the Melbourne Cup.

Monday night’s game starts at 7:30pm. Ticket sales at the door start from 5:30pm, while Reserved Seats can be booked online at www.trybooking.com/BOOMERS

The Boomers will enter the Cup Eve Derby searching for redemption after the Spirit grabbed a surprising season opening win over the Boomers back on October 13.

Following two wins on the road in recent weeks, against Sydney and Canberra, the Boomers sit fourth on the Chemist Warehouse WNBL ladder at 2-2.

For Boomers fans who are unable to make it to the games both are being televised/livestreamed across multiple channels.

TICKETS: A big crowd is expected for the Monday night’s battle. Fans are encouraged to pre-purchase reserved seats online HERE. General Admission tickets can be purchased at the door (subject to availability) – but tickets are the same price either way.

The Boomers now have nearly 3,000 Members! It’s not too late to join the Boomers Family, especially with the recently released 3-game memberships. You can purchase memberships online or sign up at the Monday home game from 5:30pm until half an hour after the game. Stock up on the new-season Boomers merchandise at the Club’s new online store or at the venue from 5:30pm until half an hour after the Monday night game.

Steph Talbot: Talbot was a standout in the game last week finishing as the equal-highest scorer for the Boomers with 17 points for the game. The Opals guard shot well early and help push her team to a crucial win in Canberra.

Maddie Garrick: Since her comeback from an ankle injury that saw her miss the opening game of the season (against Bendigo), Garrick has delivered a string of strong performances. She has generated 32 points in the season so far in just the three games she’s played.

Rebecca Cole: The well-known figure to Boomers fans, Cole has averaged 15 points a game in the Rangers four matches this season – making her the highest scorer for her team.

Betnijah Laney: The former WNBA talent joined the Rangers this 2018/19 season and has accumulated 57 points for the season so far – averaging over 14 points a game.

Nat Hurst: Hurst recently celebrated her 250-game milestone in style where she scored 14 points and had 7 assists in the Spirits’ narrow loss against Perth.

Louella Tomlinson: Boomers fans would be familiar with Tomlinson. The former Boomer has lead her new club forward on the scoreboard, finishing as the equal 2nd highest scorer with 16 points in the Spirits most recent game.

Cup Eve Derby: Come on court and meet the team! Boomers players will stay on court for up to 45 minutes post-game to chat and sign autographs with all the fans. Dexter the Mascot will also be there to say hello.

The November 3 game is being televised on Fox Sports and SBS from 3pm.

The November 5 game is being livestreamed at www.foxsports.com.au/live from 7:30pm by Deakin University.

Following the Cup Eve Derby the Boomers will play @ SBC (Nov 8,  7pm) in the Wear Your Colours game against Sydney, followed by an away game @ Townsville (Nov 11, 3pm).