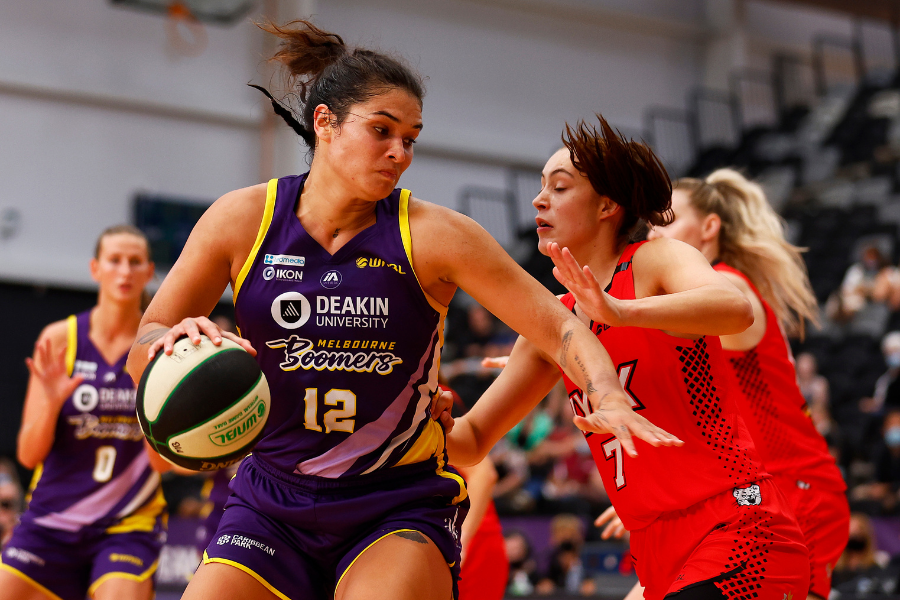 The Deakin Melbourne Boomers were unable to break the Perth Lynx winning streak at their home-away-from-home in Traralgon, Gippsland.

The teams were evenly matched as they grinded it out into overtime for the round 10 clash, although Perth were able to walk away with the win and secure the top position on the ladder.

Melbourne and Perth struggled to settle in the first term as they were unable to get their baskets flowing, neither team adding points to the board with any momentum. Perth’s Lauren Scherf the first to get an inside look of the night that converted.

Izzy Wright responded with a corner shot from outside the arc which started the scoring for Melbourne.

Equally matched, both teams continued struggled with shooting accuracy under pressure. This was reflected in the scoreboard, as halfway through the first term Perth was leading, 3 – 4.

Carley Ernst brought some rhythm to the Melbourne side as she worked her way into the paint for a two, followed by an assist off a rebound to Lily Scanlon for a layup.

Perth increased their defensive pressure as they played a 3/4 court press, forcing Melbourne to make difficult passes, leading to turnovers.

Nearing the end of the first term, with 1:21 minutes remaining, Penina Davidson levelled the score (10-10) as she worked inside the key.

Perth’s Emma Gandini got the first shot from outside the arc for her team, although this was quickly responded to by Ernst. In the final three seconds of the term, Tiffany Mitchell gave Melbourne lead, with a buzzer beater from an in-bound pass. Score at quarter time, 15 – 13.

Moving into the second term, Rachel Brewster and Scanlon linked up as Scanlon made an inside-out play to Brewster for a perimeter shot. Ernst continued to step up as she hit from outside the arc, although Perth was still able to maintain a three-point lead with 5:23 remaining.

Davidson created more inside looks for Melbourne, but the scoreboard remained low as both teams continued to struggle with field shots. Perth’s Emma Clarke extended the lead out to a game high five points, but this was short-lived as Mitchell responded with a jump shot inside the key.

Lindsay Allen fired up at the end of the term, placing her authority on the game with an aggressive drive into the key, giving Melbourne the momentum and levelling the score, 34 – 34.

The third quarter brought an increased number of fumbles and turnovers from both teams as they tried to increase the pace of the game. Allen started the term where she left off in the first half of the game, hitting from outside the arc off an inside-out play with Wright.

Ernst found herself in some foul trouble as she was benched with four personal fouls in the opening minutes of the term. Mitchell continued to show her aggression into the key, drawing a foul and hitting both shots at the foul line.

The inside-out play proved to be valuable for Melbourne, as Davidson capitalised on the inside looks and offensive rebounds, drawing the fouls. Davidson followed the three-point play with a defensive block, spreading herself throughout the court and getting involved in every piece of action.

It was a two-point ball game in the dying seconds of the third term, as Scanlon closed the gap off an offensive rebound, although quickly responded to with a midrange two by Perth’s Jackie Young. Perth maintained their two-point lead at the break, 47 – 49.

Allen brought the heat for Melbourne in the final term, showing her determination to bring Melbourne back into the lead hitting two shots from outside the arc.

Perth quickly responded and the scoring was levelled, 57 – 57. Alongside Allen, Scanlon stepped up with a left-handed layup followed by pressure in defence to force Perth into a turnover, giving Melbourne possession.

Scanlon did not stop there as she provided a game breaking play, forcing another Perth turnover, capitalising on a fast break to show her explosiveness.

With four minutes left of the fourth term, Ernst had her fifth personal foul and was subbed out of the game. Lou Brown provided a big defensive play in the last two minutes, as she put her body on the line to draw an offensive foul from Perth’s Scherf.

Melbourne was in the lead by three points with 13 seconds on the clock. Perth’s Alex Ciabattoni closed the gap with a shot off the glass inside the key.

Melbourne was leading by 1-point and with possession, Perth looked to foul the opposition with every in-bound pass as Melbourne went to the foul line after four in-bound attempts.

Melbourne was back to a three-point lead with 3.7 seconds left, although Perth had possession and the remaining time to hit a three-point shot, which had been a struggle for the side throughout the match. Perth’s Alex Sharp pulled up with a clutch three and levelled scores up, taking the game into overtime.

Despite Perth’s efficient defence, Melbourne was able to maintain scoreboard pressure, as Davidson once again worked from the inside to level the score with a minute remaining, 71 – 71.

In the dying seconds of overtime, Melbourne was unable to hit their shots, whilst Perth was thriving in the pressure and brought the heat offensively. Final score, Perth 76 – Melbourne 71.

Allen was fired up and ended the night with 17 points, six rebounds and one assist. Whilst Davidson showed what she can do under pressure with 13 points and nine rebounds. Ernst showed up for Melbourne with 10 points, seven rebounds and two assists.

The Boomers will be fired up and ready for a win in their next clash against Sydney Uni Flames at the State Basketball Stadium (SBC) on the 20th of February.