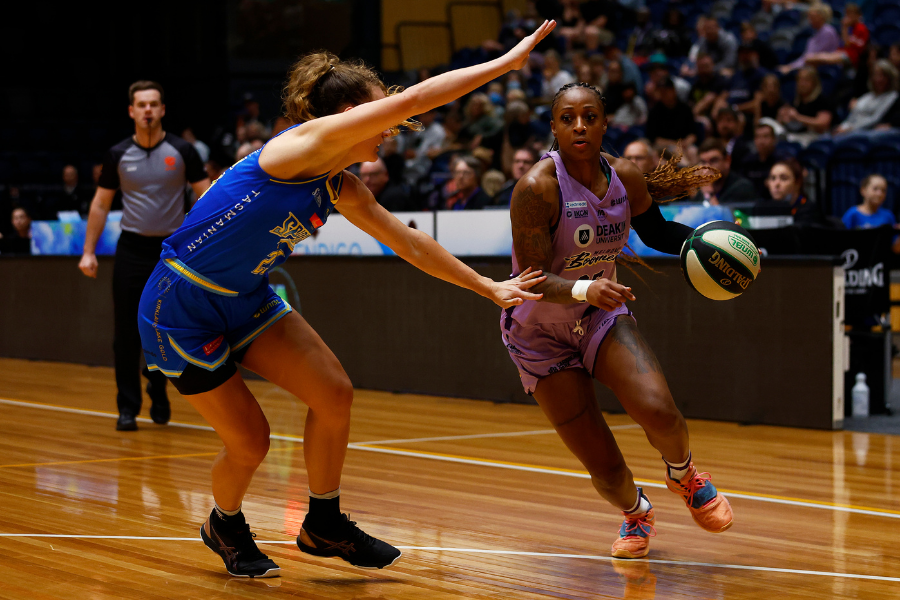 In their first match-up of the weekend, the Deakin Melbourne Boomers prevailed once again over the Southside Flyers, final score 87 – 72.

The opening minutes were high-pace and high-intensity. The first term saw two lead changes, plenty of offensive fouls, and a fair amount of stop-start play as the quarter wore on – a sign neither team was prepared to let up, albeit struggling to convert.

Melbourne started to gain a little momentum and show signs of creeping back when Lily Scanlon came on and combined with Cayla George to score, George backing it up with a three-pointer a couple of seconds later and bringing it back to a four-point game.

Another spin-move and basket by George in the dying seconds of the quarter, along with Southside failing to score, brought it back to a one-possession ball game into the first quarter break (21 – 23).

Two points by Tiffany Mitchell and another bucket by Ezi Magbegor, evened the scores in the opening minutes of the second term. Lindsay Allen bagged a three-pointer soon after and Melbourne took the lead for the first time in the game.

Hints start to drop that the tides were shifting for the Boomers when Mitchell intercepted Maddi Rocci’s pass to Southside teammate, Bec Cole, and made a clean run down to the Boomers’ end for two.

The lead changed once more this quarter, but Melbourne did a great job of capitalising on turnovers and locking down one-on-one assignments. By midway through the second term, 18 points had been scored inside the paint.

As the clocks ticked down to four minutes left on the clock for the quarter (score 35 – 31 the Boomers way), Allen pulls up and knocks down a three to take the score to a six-point spread. Magbegor scores soon after. Melbourne led by eight points.

Southside answer by drawing fouls and hitting their free throws with accuracy, to bring it back to a two-possession ball game.

After a Flyers offensive foul and with ten seconds remaining on the clock for the term, Allen has a clean look and knocks it down. Having been trailing by 10 on two separate occasions, Melbourne have worked their way back into the game and now lead on the home floor of the defending champions. The total into to the main break, 42 – 35.

At the break, Southside’s field goal percentage sits at 33%, Melbourne’s 52%. Another notable difference in Southside only managing to hit 15% of their three’s, compared to Melbourne’s 40%.

Magbegor kicks off a scoring run in the second half by finding a way into the hoop. Seconds later, Mitchell shows off her smooth ball handling skills, going behind the back to lay it in for two – securing our largest lead of the game so far, 11 points.

Additional points by Mitchell, as well as Allen’s flawless back-to-back three’s, brought the tally to 14 points within the first four minutes of the quarter for the Boomers. Melbourne continued to pull away in the third quarter to take the scores to, 70 – 54.

In the closing term, Izzy Wright makes an impact and rolls one off the glass with six minutes remaining. Rebecca Cole clocks up her 20th point for Southside but is answered almost immediately by another three from Allen (82 – 63).

Lou Brown comes on for her first minutes in purple. Southside close off the game with a three from Kristy Wallace, but it is a Boomers night, coming away with the Michele Timms Cup, back-to-back wins over the Flyers and come from behind win.

George dominated, with a double-double in 25 points and 12 rebounds. Allen with 22 points for the game, 11 in each half.

The question on everybody’s minds was how we would go backing it up the next day against Bendigo, at their home stadium, after a loss to them in our first game of the season.

The Deakin Melbourne Boomers ended their double-header weekend with a win against Villawood Bendigo Spirit. They were able to shake off the experience of their last meeting and come away with a 20-point difference.

Bendigo brought intensity in the first quarter with an opening score by Leilani Mitchell, capitalising on their speed and their ability to draw fouls on the talls of the Melbourne side, including Cayla George and Ezi Magbegor.

George got into foul trouble in the first quarter, coming to the bench with three fouls and not reappearing for the rest of the first half.

Melbourne were unable to get into their rhythm with some tired legs from the Southside Flyers game that occurred less than 24 hours before facing Bendigo.

Despite this, Penina Davidson and Lily Scanlon came off the bench with extra energy and assisting in the Boomers convincing win. Davidson ended the night with 10 points and 6 rebounds.

Melbourne started the second quarter with a one-point lead as Tiffany Mitchell and Magbegor brought the heat and lead the team to their strong win.

Mitchell maintained her aggressiveness moving into the key and finished the quarter with 18 points.

Magbegor was able to work her magic in the key with rebounds, blocks and intercepts in her arsenal.

Lindsay Allen was also fired up in the second quarter as she continued to step up to the three-point line as she did against the Southside Flyers the previous night. Additionally, Lou Brown was able to get her first shot in her WNBL career and ended the night with 4 points and 1 rebound.

Both sides brought the high energy and fierce pressure before half time, as a result walking into the break with a tight and low scoring game. Melbourne led by 40-35 at half time.

The Boomers brought George back into action at the start of the third quarter, although shortly gained her fourth foul and was back on the bench. Davidson came off the bench as a result, and made an impact, bagging a three-pointer as soon as she stepped back on the court.

Mitchell copped a hand to the face in the third quarter, causing and extended stoppage. Her blood nose causing our most dominant player to leave the court for treatment in the rooms.

Shortly after, Mary Goulding of the Bendigo went down winded due to a collision with Allen.

Melbourne were able to put their foot down and breakaway in the third quarter despite the Bendigo’s efforts to slow down the team momentum.

Tess Madgen shot a three-point buzzer beater to end the third term and lead the team into the final quarter with a 10-point lead (63-43).

Magbegor walked away with 21 points, 15 rebounds, 9 assists and 4 blocks, only one assist short from a triple double. Whilst Mitchell ended the night with 25 points.

The Boomers line-up showed their grit and fire despite fatigue as they were able to maintain their pressure, aggressiveness, and possession in the final term. Final score, 81-56.