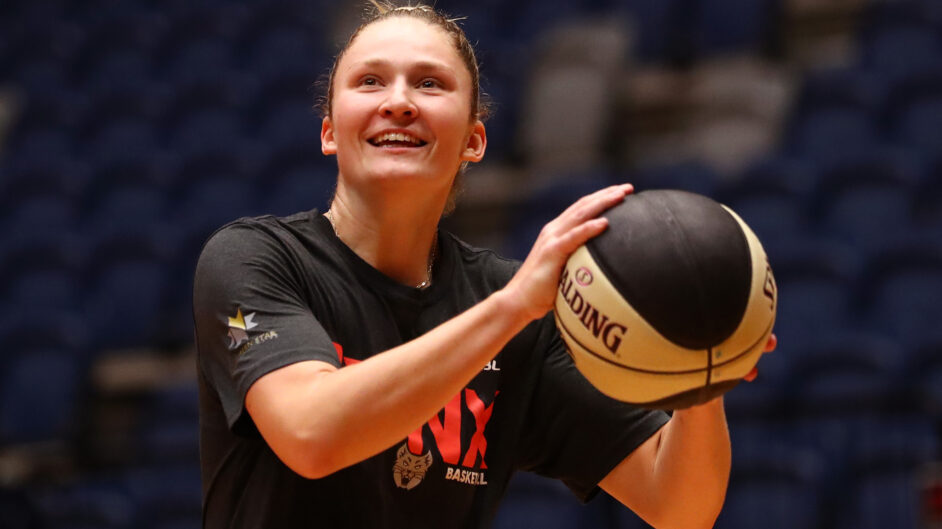 ATWELL THRIVING BEING BACK HOME, PLAYING FOR LYNX

Amy Atwell is living out her dream to now play with the Perth Lynx and can’t wait to spend a Christmas back home for the first time in six years, but before that two road wins are the only present she’s asking for.

Atwell grew up watching the previous incarnation of the Lynx playing in the WNBL, the West Coast Waves, and she one day dreamed of representing her hometown team during her professional basketball career.

A lot has happened for her in the in between years with Atwell attending the University of Hawaii from 2016 up until graduating earlier in 2022.

Along the way she had a standout career with Hawaii Rainbow Wahine where she was the Big West Player of the Year as a senior. She was a standout three-point shooter all along and it led to her being drafted by the LA Sparks of the WNBA.

She has since had the chance to return home to Perth and now life is full of both new and old experiences for her right now. The new of playing for the Lynx in the WNBL for the first time and the old of reconnecting with family and friends around Christmas time.

Atwell has always had big basketball dreams and already a lot of them have come true, including getting to now play for the Lynx.

It might be only six games into the season, but she’s already loving everything about it.

“I definitely had this dream growing up and it was the West Coast Waves when I was growing up and I used to come to their games and wanted to one day be out there and playing and it’s where I wanted to be,” Atwell said.

“To be able to see that I’ve kind of made it there now and can share the court with someone like Sami Whitcomb who I was watching play before I went to college in the now NBL1 and at the Lynx. To share the court with those sort of people day in and day out is pretty amazing.”

Perhaps the best aspect of playing at home for the Lynx for Atwell is the chance for her to reconnect with so many friends and family who she had lost touch with while in Hawaii, and for them to come along to get to her play as well.

“Then the biggest perk is to be able to have my friends and family at the games,” she said.

“I haven’t been able to do that much over the last six years playing in Hawaii. I’ve had friends from high school, old basketball teammates growing up, my grandparents all come and watch. It’s definitely a huge perk having all of them coming to the games now.”

Christmas back at home

The immediate focus for the Lynx and Atwell is obviously on the two upcoming road games starting in Townsville on Saturday and then Canberra on Wednesday. Beyond that Atwell can’t wait to spend Christmas at home for the first time since she left for Hawaii.

“This will be the first Christmas that I’ve actually been able to be home for in six years,” Atwell said.

“I’m super excited about it and even just the build up to Christmas and being home, and going Christmas lights looking with friends and family. It’s just little things like that and just being around family for the holidays at this time of year which I haven’t had in a long time that’s great.”

As for what Christmas Day itself might now look like as a 24-year-old compared with what she remembers as a teenager, she’s hoping not too much has changed and can’t wait for the big family celebration.

“Hopefully it’s not too much different than I remember but I’m looking forward to it,” she said.

“It’s been a while since I’ve been home at this time of year and we always have a fairly big family thing on Christmas day. I haven’t been around for those lately but I’m sure it will be different now that I’m a bit older in some aspects, but family is always family.”

The season so far

As for what’s happening on the court with the Lynx in the WNBL five rounds into the season, Atwell has enjoyed the experience and hopes the new-look group continue to build on what they’ve done so far.

“It’s going good. Obviously it’s still kinda early in the season and we’re a pretty new team put together this year, but I’m loving all the girls and the experience so far. Hopefully we can continue to build off these first six games now,” Atwell said.

“We’re a pretty young group this year with only two returning starters so coming in we knew chemistry would be a bit junky from the start.

“Off the court it’s a great group of girls and we all get along super well so that’s made the on court stuff all that easier. When things aren’t going great on the court we know that we have each other’s back and stuff like that so it definitely goes a long way.”

Positives from Flyers/LJ match up

Looking back on last Friday night’s loss at home to the Southside Flyers, despite never being happy to lose, there were plenty of positives to take out of the game from a Lynx perspective.

That was especially considering Lauren Jackson produced a standout performance for the Flyers and the Lynx were missing captain Sami Whitcomb.

Atwell actually felt like it could have been the Lynx’s most encouraging performance of the season which gives them heart moving forward while it was quite the experience for her sharing the court with Jackson.

“It was unreal and she’s just such a competitor at her heart through and through. Just to be able to share the court with her is unreal to think about and something that I’ll forever cherish,” she said.

“Obviously it’s disappointing not to get the win but I think we can all be proud of the effort and the way we did fight, and what we showed in that game.

“I think that outside of the result it maybe was our best game effort wise and fighting wise that we’ve had as a team this season. Obviously we have to take stuff from that and not get disheartened by that loss.

“We have to take that moving forward now and mould that into our identity for the rest of the season.”

Learning to play without Sami

Not having the leadership, production and just all-round brilliance of Whitcomb against Southside was obviously a blow for the Lynx. Atwell, though, feels the other players needing to step up could actually prove a positive once the two-time WNBA champion returns.

“Obviously we missed Sam on the court not only because of her production and points and what she brings to the game, but also her leadership and voice on the court,” she said.

“At the same time, I think it was a great opportunity for some other girls to step up to see where else we can pull that from so we’re not always relying on Sam in that aspect.

“But we’re definitely looking forward to getting Sam back because obviously she’s a big part of the group, and big leader for us on and off the court.”

The Lynx’s immediate task is now on playing the Townsville Fire this Saturday on the road with Atwell fully aware of the challenge they present.

“Townsville is a super talented group and are coached really well,” Atwell said.

“I’ve watched a few of their games and they’ve started the season out really well, and have some great players.

“We are looking forward to the challenge and most of our games so far have been at home so it will be good to be on the road and seeing what that’s like, and get into our travel routine. We’re just super excited to play again more than anything.”