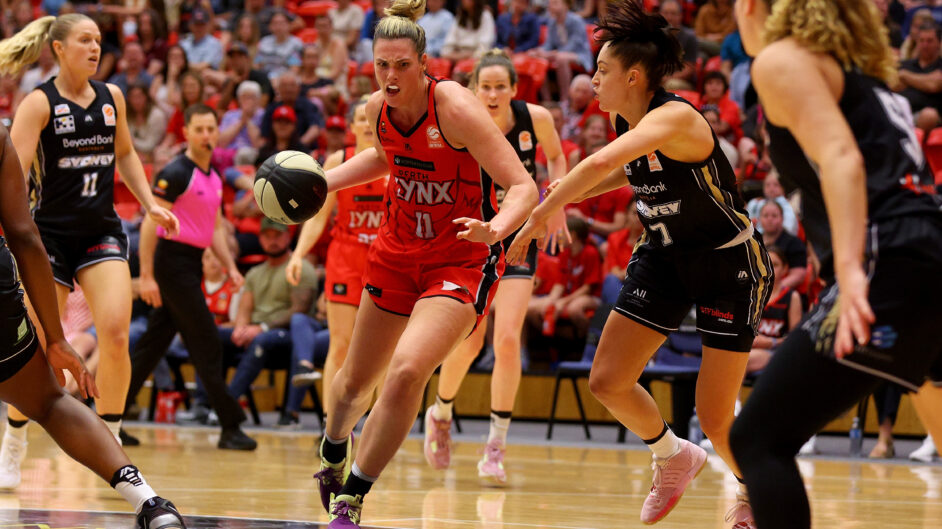 A remarkable 27-point first half from Lauren Scherf set it up and her Perth Lynx teammates helped seal the deal in a 75-64 Saturday night home WNBL victory against the Sydney Flames.

The Lynx couldn’t have played worse in the opening quarter on the back of coming into the game at Bendat Basketball Centre missing Chloe Bibby and her 18.4 points and 5.0 rebounds a game.

Perth managed just seven points on 2/17 shooting in that opening period with seven turnovers, but things turned around in remarkable fashion in the second quarter to set up the win.

Scherf was solid enough in the first quarter with five points and four rebounds, but what she did in the second was simply remarkable.

She played the entire 10 minutes and in that time she delivered 22 points and four more rebounds while shooting 8/9 from the floor and 3/4 from the three-point line.

That gave her 29 points to the half with the Lynx leading 39-30. For much of the second half they maintained a double-figure lead over the Flames before ending up winning by 11 to improve to 5-5 on the season and maintain touch for a playoff position.

Lauren Scherf ended the night with 33 points, 14 rebounds and four assists for the Lynx on the back of shooting 13/22 from the floor, 4/8 from three-point range and a perfect 3/3 from the foul line.

Others had to step up for Perth in the absence of Chloe Bibby and they did. Captain Sami Whitcomb finished with 18 points, seven rebounds and five assists while landing 4/8 from the land of plenty.

How it all played out

It was a slow opening to the contest for both teams after an early bucket for Sydney from Jocelyn Willoughby and a three-pointer for Perth from Lauren Scherf.

It wasn’t until the five-minute mark when the next score came and that went the way of the Lynx to Scherf, but then the Flames got on a roll to score the next nine points to see them lead 11-5 when Shyla Heal knocked down a three-pointer.

Sami Whitcomb stopped the run with two free-throws for Perth but it turned out a horror opening quarter for the home team with just the seven points on 2/17 shooting from the floor with seven turnovers.

As a result, the Flames went into quarter-time leading 17-7 and were then up 19-7 to start the second period before the Lynx led by Scherf took over the contest.

Scherf nailed back-to-back three-pointers before scoring another bucket and then converting a three-point play to score all the points herself in an 11-0 run for the Lynx.

Scherf was anything but done and by the time she hit her third three of the second quarter on the half-time buzzer, she had a simply remarkable 27 points and eight rebounds with the Lynx leading the Flames 39-30.

Amy Atwell pushed that Lynx lead out to 12 points to start the second half before a three-pointer from Whitcomb saw it grow to 14.

As you would expect, the Flames changed up some things defending Scherf and limited her to just the six points for the third quarter, but that meant she still had 33 by three quarter-time with the Lynx leading 60-48.

Sydney weren’t going away and the first five points of the fourth quarter to Tiana Mangakahia saw the margin back to seven. The Lynx steadied and buckets to Mackenzie Clinch Hoycard, Sharp and Whitcomb had the margin back out to 10.

Another three ball from Whitcomb pushed that lead to 13 before the two dagger blows were hit from beyond the arc by Atwell for the Lynx to go on to win by 11 to improve to 5-5 on the season.

The Lynx remain at home to host Lauren Jackson and the Southside Flyers on Friday night before a three-game road trip away to Sydney, Bendigo and Melbourne.