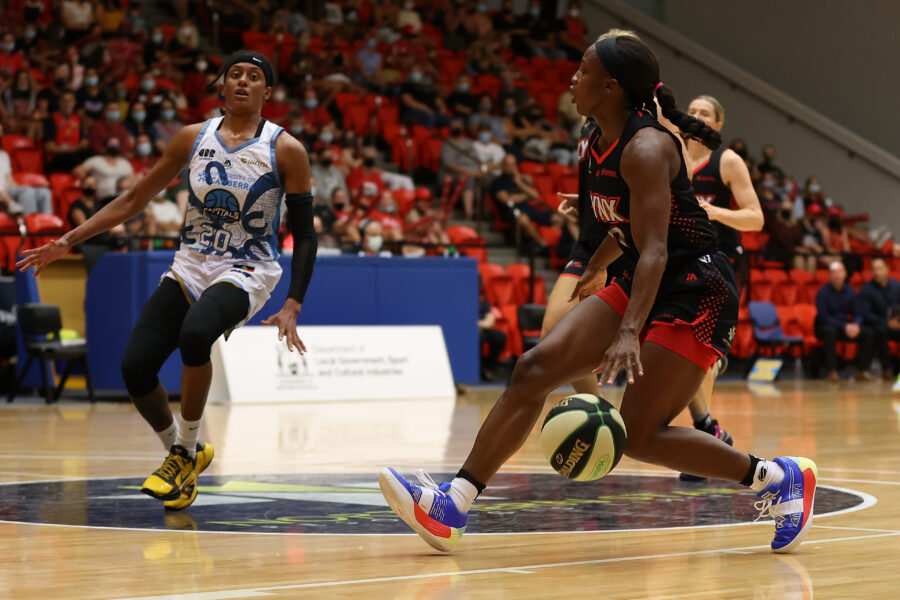 BRILLIANT YOUNG NOT QUITE ENOUGH FOR LYNX

The Perth Lynx couldn’t quite finish off their homestand how they hoped with the UC Capitals coming to Bendat Basketball Centre and leaving with the 96-80 Saturday night win despite 36 points from Jackie Young.

Young shook off the knee injury she suffered in Wednesday night’s win against the Adelaide Lightning to deliver a remarkable individual performance in what will be the last home game of the regular season for the Lynx.

She did all she could with Perth trying to remain in top spot in the WNBL with three road games to close the regular season over the next eight days. She finished with 36 points, three rebounds, three assists and three steals while shooting 16/28 from the field.

Marina Mabrey provided good support too as she works back to full fitness following her foot injury with 14 points in almost 22 minutes, but ultimately the difference was the extra contributors the Capitals had.

It wasn’t the ideal start for the Lynx with the Capitals hitting the first five points including a triple from Brittany Smart, but the home team soon settled with buckets to Lauren Scherf and Alex Ciabattoni, and Jackie Young was just getting started.

She scored a couple of nice looking pull up mid-range jumpers, but still the Capitals were firing offensively and had 21 points on the board in the first six minutes.

Despite Marina Mabrey then entering the game and putting up seven quick points as well to support Young, Canberra was still up 29-23 by quarter-time.

The Caps then put up the first five points of the second period to go out to an 11-point lead before Young did her best to keep the Lynx in touch. It was almost a longhand with her scoring all 12 of the Perth points in the quarter.

The Capitals had more helpers and as a result went into the half-time break leading 48-35 despite the Lynx shooting 51 per cent and Young putting up 20 points. However, Sami Whitcomb, Scherf and Darcee Garbin only combined for four points on 2/9 for the half.

The Lynx had to come out strong to start the second half and to their credit, they did exactly that. Scherf opened the scoring before another couple of buckets to Young, and then Whitcomb drained a three to bring the deficit back to single figures.

The Lynx would then score nine straight points in their best patch of the night with two more Young baskets, and five points to Alex Ciabattoni.

Suddenly it was a three-point ball game, but they couldn’t quite go on with it and the Capitals responded with two quick three-pointers from Kelsey Griffin, and another to Jade Melbourne which saw the visitors lead 75-65 by the end of three.

Any chance of a Lynx fightback was blanketed with the Caps hitting the first six points of the fourth quarter to again lead by 16. Some hustle from Emma Gandini, an and-one from Mabrey and three from Ash Isenbarger gave a brief spark, but it wasn’t to be and the visitors ended up winning by 16.

The Lynx now return to the road to close the WNBL season away to the Sydney Uni Flames on Wednesday, and then the Townsville Fire in Far North Queensland on both Friday and Sunday.