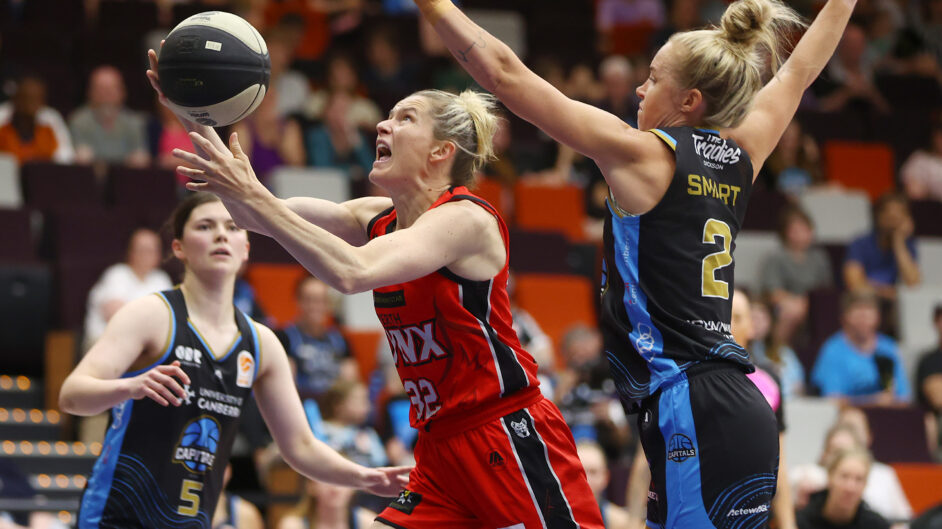 The Perth Lynx will go into the Christmas break on a winning note on the back of a tremendous finish to come from behind and beat the UC Capitals on the road 97-83 on Wednesday.

It was the last game for the Lynx leading into Christmas as they attempted to snap a three-game losing run up against a Capitals team hunting their first win this WNBL season having lost their first seven matches.

The Caps came out on fire too led by Jade Melbourne desperate for that first victory. She dominated her match up with Sami Whitcomb up to half-time with 20 points, but the Lynx captain didn’t let that last and had a brilliant second half.

From the moment the Capitals led by 11 with two and-a-half minutes to go in the third quarter, it was a dominant performance from the Lynx.

Inspired by captain Whitcomb, vice-captain Lauren Scherf and the emerging Chloe Bibby, the Lynx outscored the Capitals 40 points to 16 the rest of the way in a stunning performance.

The result improves the Lynx to a 3-5 record now on the season while the Caps are 0-8.

The Lynx finished the game shooting at 50 per cent from the field while hitting 9/28 from downtown and that was after missing their first nine from downtown. Perth also scored 54 points in the paint and there was a lot to like in the performance given everything Canberra threw at them.

After a rough first half, Sami Whitcomb dominated and finished with 26 points, seven assists and six rebounds on 10/20 shooting from the field.

Jade Melbourne had a hot second half but couldn’t quite keep it going for the Capitals finishing with 24 points, nine rebounds and seven assists. Rae Burrell added 20 points and eight rebounds, Alex Bunton 10 points and seven boards, and Nicole Munger 10 points, three rebounds and three assists.

How it all played out

Alex Sharp came into the starting five for the Lynx and started well with the first score of the game. The Caps also started well but a couple of buckets to Robbi Ryan kept Perth in touch, at least until triples from Alex Bunton and Jade Melbourne put the home team up 15-6.

Chloe Bibby scored two quick baskets out of a timeout to steady the Lynx but Canberra had started well on the back of Melbourne to be up by 10 just five minutes into the game.

Another fadeaway jumper from Bibby steadied the Lynx before Amy Atwell gave a quick spark off the bench. When Ryan added another layup to close out the quarter and suddenly scores were all square at 22-22.

The Capitals started the second quarter with a 6-1 run but a couple of scores to Sami Whitcomb and Atwell. However, the Caps were desperate for that first win and scored the next six points again before Whitcomb steadied things for the Lynx.

Her battle with Melbourne continued with the Caps star putting her team back up eight but the Lynx kept in touch and only trailed 47-44 by half-time despite failing to make a three-pointer from six attempts while the Caps went 4/10.

A Brittany Smart and-one pushed Canberra back out to a six-point lead to start the second half but Whitcomb was about to warm up and added a couple of free-throws.

Bibby then scored five quick points for the Lynx and it was a one-point ball game, but once more Canberra pulled back away and by the time Nicole Munger knocked down a three with 2:27 to go in the third the home team was in full control once more up 11.

Ryan Petrik called for a timeout and he got the best possible response for the rest of the game. It started immediately with Lauren Scherf hitting inside and nailing a three-pointer.

Whitcomb then made a layup to bring the margin to four and Atwell closed the third quarter with a three to make it just a one-point game by three quarter-time after being down 11 just two minutes earlier.

Scherf opened up the fourth quarter with a triple to put the Lynx on top by two once again. Scherf continued her hot second half with the next two baskets for the Lynx to keep them on top with seven minutes to play.

Whitcomb pushed Perth’s lead out to three and then another three ball from Bibby put them up by six and suddenly they had all the momentum.

The captain continued her outstanding second half with another triple with five minutes to play to make it a seven-point game.

Bibby stretched the Lynx lead to nine and then Whitcomb, Bibby and Scherf kept the momentum going down the stretch on the way to the 14-point victory to take into Christmas.

The Lynx now have a break over the Christmas period before a string of three home games at Bendat Basketball Centre starting Friday December 30 against the Adelaide Lightning.