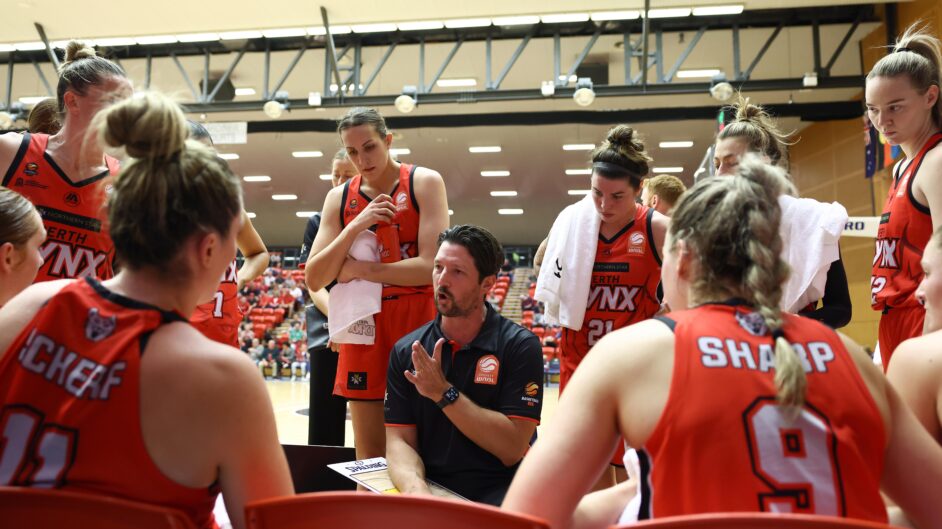 LYNX CAN ONLY IMPROVE AFTER SEASON-OPENER

Alarm bells couldn’t help but be ringing for Ryan Petrik after Wednesday night’s WNBL season-opening loss for the Perth Lynx to the Melbourne Boomers, but he feels things can only get better starting Sunday away to the Bendigo Spirit.

The Lynx opened the 2022/23 WNBL season on Wednesday night at Bendat Basketball Centre but things didn’t quite click as the home team was hoping in the grand final rematch.

While Petrik did come away feeling the offence can click significantly better despite still scoring 88 points on the night and he’s confident they will do better than concede 20 turnovers a game moving forward, the great concern was at the defensive end.

The Boomers were able to score 104 points for the night on the way to the 16-point victory while shooting 53 per cent from the field and scoring 54 points in the paint to the Lynx’s 26, 13 second chance points to two, 17 fast break points to nine and 23 points off turnovers to 12.

The Lynx now have a quick turnaround for a second match in Round 1 on Sunday against the Bendigo Spirit in Bendigo.

Petrik certainly feels they can only play better.

“Bendigo are tipped to make the grand final too and then you look through and every team is going to be good that we play against,” Petrik said.

“The concern from the first game was that if we played really well and got beat like that, it would be a different story.

“But the fact that we just looked so far off especially defensively, you try not to get too high with the wins and too low with the losses, but that was a pretty bad example of how we normally play. We can only get better than that.”

They did score 88 points on shooting 47.1 per cent and the three ball wasn’t too bad either as they hit 15/37 as a team led by the 6/11 from captain Sami Whitcomb who ended the night with 30 points.

Amy Atwell, Alex Sharp, Chloe Bibby and Lauren Scherf all landed two three-pointers apiece too so Petrik is confident the offensive end will largely take care of itself as this WNBL progresses.

It’s the taking care of the ball that needs to improve but even more, defensively Petrik was just about pulling his hair out with what he was watching the longer the game unfolded.

“We can score, we just can’t stop anybody. We couldn’t guard a statue and for a containment defensive style, to give up 54 points in the paint, everything was just at the rim,” he said.

“I think 19 of their first 22 points were scored in the paint and you just ask how that happens. We aren’t playing the old school Wildcats’ 94-feet up and in defence and getting blown by, we are in quarter-court containment and can’t contain.

“As I said in pre-season, I thought we could score well enough and our offence is pretty gunky, but we still scored 88 points. But geez, defensively if you can’t guard a statue you are probably in trouble.”

No excuses for defensive performance

Petrik wasn’t looking for any excuses after the game on Wednesday especially for the performance defensively, but what he does know is that they have to fix a lot of the problems and do it quickly if they want to be more competitive early this WNBL season.

“I think everyone has the same problems in terms of their preparation and that would be a cop out, and Melbourne have three Opals and one of them wasn’t even playing,” Petrik said.

“So glass half full, that’s three WNBA players we played against plus Cayla George so it’s a pretty handy first four they’ve got, and they are the defending champs. But the glass half empty is that we gave up 104 points and that’s a concern.

“They still have (Tess) Madgen to add into their team and they beat us how they thought. Last year in the grand final it felt like the pick-and-rolls murdered us, but tonight it was just the simple one-on-one blow bys.

“They were just getting head on rim, layup one after another. They had only hit one three to half-time so I don’t know why we were giving up one-on-one layups.

“It was like we were trying to play the Golden State Warriors and they had four Steph Curry’s at the three-point line. We were still hugging all their players outside and just gave up layup after layup. ”

At the offensive end

With Whitcomb scoring 30 points, Scherf 17, Atwell 14, Sharp 10 and Bibby, scoring wasn’t necessarily a problem for the Lynx and Petrik only feels like the team’s offence will keep improving the more they play together.

“We just have to keep going through our playbook and obviously it’s fairly motion orientated with a lot of reads hence when we generate good looks it’s hard to guard,” he said.

“At the same time, when it goes bad it’s much like that Golden State model of either humming and being unguardable, or it’s not humming and becomes leaky and turnover prone.

“That doesn’t give your defence a chance to set up in turn, so we go back to film and the 20 turnovers are obviously a concern. But the defence in the half court is a much bigger concern.”

Import Lynx guard Robbi Ryan made her WNBL debut on Wednesday on the back of a standout NBL1 West season with the Joondalup Wolves.

While she didn’t have a night to remember with just the two points and four turnovers in 18 minutes, Petrik is backing her in to find her feet in the league despite the quality of opposition she will continue to come up against.

“It’s a really even comp and there’s going to be an Opal or WNBA guard on every single team. We believe in her and she obviously has to be better than that, and she would have had first game nerves which is understandable. They were up and into her from the very start, she’ll get better.”

Petrik saw good signs from both the starting three and four for the Lynx, and is confident they will only keep improving moving forward too.

“They were both starting to fit in and finding where their roles are going to come from, and as with every team it’s going to take five or six weeks to get comfortable,” Petrik said.

“Everything for us was just a little bit gunky offensively but we still scored 88. The issue is that we have to find even better quality shots because that will give our defence a chance to get set up. We also took some wild shots and combined with the 20 turnovers that caused the run outs.”