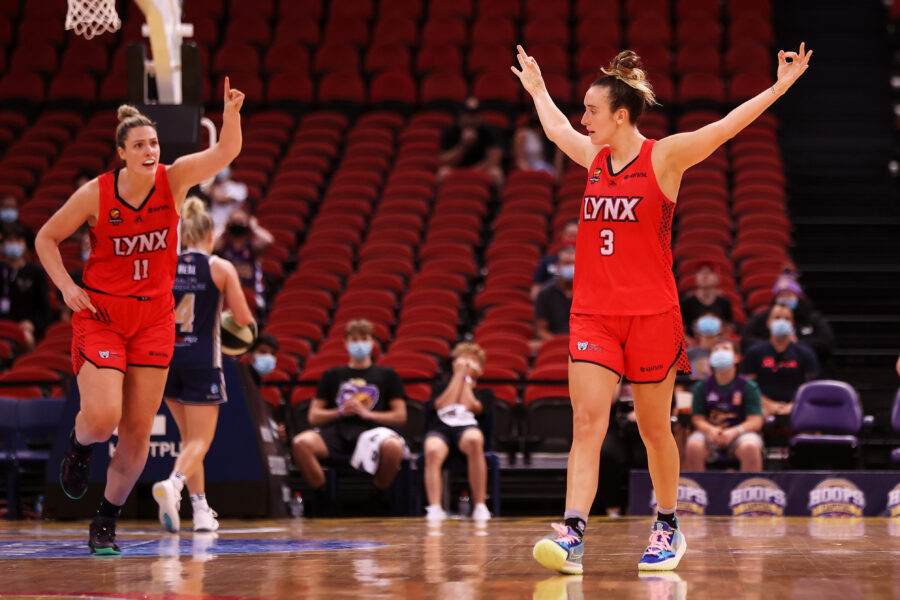 It has been a rough few days for the Perth Lynx and the Sydney Uni Flames put them under the pump at Qudos Bank Arena on Sunday, but they produced a dominant fourth quarter to score the 86-81 victory.

The Lynx have been playing good basketball to start their WNBL season including a 102-73 win over the UC Capitals back on Wednesday. But since then they were left devastated with the news Western Australia’s borders will remain shut and their return home date is a great unknown.

It would be understandable if they were a little flat as a result but you also need to give credit to the Shane Heal-coached Flames team who were desperate for their first win of the WNBL season.

Perhaps buoyed by seeing their co-tenant Sydney Kings win big in the NBL clash over the Brisbane Bullets to start the double-header at Qudos Bank Arena, the Flames produced their best three quarters of the season to date.

With former Lynx players Lauren Mansfield (24 points) and Shyla Heal (19) on fire with help from new import Rennia Davis (21 points, 13 rebounds), Sydney Uni were on top most of the game including leading by as much as 13 points.

They still led by nine with seven minutes remaining, but the Lynx dominated from there scoring 17 of the game’s last 20 points. They held Sydney Uni to just three points and no field goals over the last seven minutes to turn a nine-point deficit into the five-point win.

It was Marina Mabrey who produced a standout performance all game for the Lynx with the star guard finishing with 34 points, five rebounds and five assists on the back of shooting 4/7 from three-point land and 8/9 from the foul line.

It was quite the spectacular performance on the afternoon from Mabrey and afterwards, she was just happy the Lynx found a way to win over a gutsy Flames outfit.

“They were awesome. They came out with a lot of energy and those guards are fearless, they were hitting the pick and pop on us, getting rebounds and taking it right at us. Hats off to them, they played a great game,” Mabrey said.

“Late in the game I think we just settled down a bit and kind of slowed them down their offence with our press to force them to struggle getting into what they wanted originally.

“They weren’t scoring as quick on us so we were able to get out in transition, get to the free-throw line and get some threes to go down. I think we just hit the gas a little bit. We were kind of cruising in the first half so it was about coming out and playing that little bit harder.”

The Lynx might have been coming off a 29-point win over the Capitals back on Wednesday, but had received some rough news since with the announcement of WA’s borders no longer opening. They struggled for much of the afternoon whatever the reason.

Much of the credit for that goes to the Flames who were chasing their first win of the WNBL season. Despite that, it was tight for much of the opening quarter with the Lynx only trailing by one at quarter-time, but Sydney Uni pulled away in the second.

It was new import Rennia Davis who gave the spark with eight quick points to open the quarter. Then leading to half-time Lauren Mansfield caught fire with her own run of eight straight points on the way to 18 for the half.

However, 13 points from Marina Mabrey and nine from Lauren Scherf kept the Lynx within touch with the Flames up 43-36 at the half.

The Lynx were trying to fight their way back into the game and Mabrey was doing all she could in the third quarter by hitting three three-pointers along with an and-one play to have 28 points up to three quarter-time.

However, the Flames were on fire still up the other end and including Mansfield having 23 up to three quarter-time on 10/12 shooting, the home team still led 70-61 heading into the fourth.

Perth needed to dig deep in the final term and the comeback started when captain Darcee Garbin hit a three to open proceedings. Sami Whitcomb scored five quick points too, but the Flames were still up 78-69 when Davis hit another three with seven minutes on the clock.

The Lynx turned up the heat from there, though, and Sydney didn’t hit another field goal the rest of the way and scored just three more points in the final seven minutes, and just two in the last five.

Up the other end, Young was the real spark with six points in no time to turn a three-point deficit into a three-point lead before the star of the day, Mabrey closed the door on the win with a huge three to keep the Lynx’s impressive start to the season going.

The Lynx will be back in action on Thursday against the Southside Flyers in Dandenong before returning to their home away from home in Ballarat on Saturday to face the Bendigo Spirit.