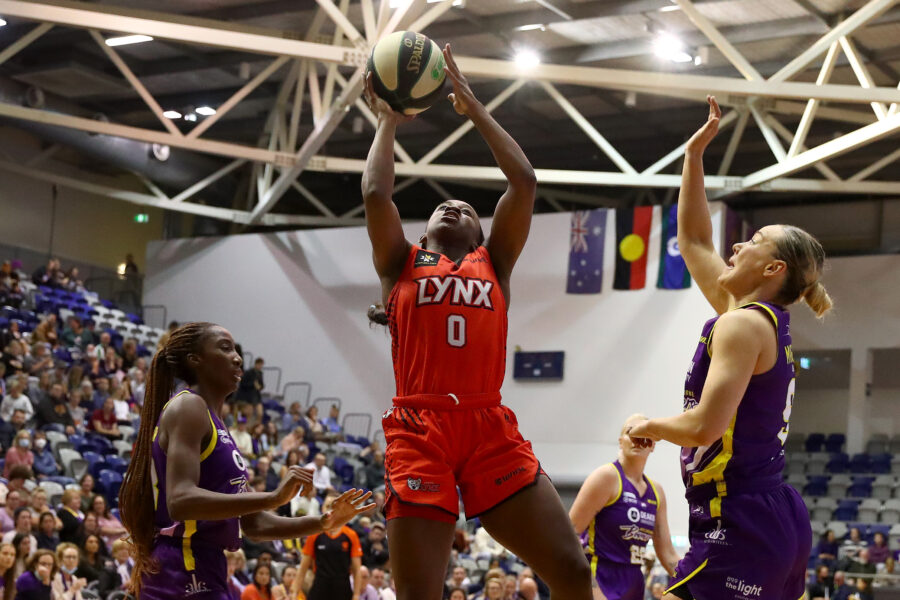 The Perth Lynx team for this WNBL season was built to be explosive and they turned things up to full tempo to open the Grand Final Series with a brilliant Game 1 performance to beat the Melbourne Boomers 98-71 in Melbourne on Saturday.

The Lynx are attempting to win the franchise’s first WNBL championship since doing so as the Perth Breakers in 1992. They are now one win away from achieving that feat after Saturday’s 27-point victory at Melbourne Sports Centre – Parkville.

While it was a brilliant offensive performance from the Lynx starting with three triples to open the game from Marina Mabrey before Darcee Garbin joined her in hitting five from downtown for the evening, the defence was every bit as impressive.

The Lynx were able to hold the Boomers to just 32 points in the first half and 39 in the second to now look forward to attempting to secure the championship in Game 2 at Bendat Basketball Centre on Wednesday night.

The Lynx also outrebounded the Boomers 47 to 36 and had six players scoring at least nine points in a terrific team showing.

Captain Darcee Garbin saved her best performance of the season for Grand Final Game 1 and finished with 25 points and four rebounds while knocking down 5/10 from three-point territory.

Jackie Young continued her stunning form with another 21 points and four assists while Marina Mabrey caught fire with the first three triples of the game on her way to 20 points, seven rebounds and four assists on 5/11 from beyond the arc.

Tiffany Mitchell top-scored for the Boomers with 17 points with Ezi Magbegor adding 14 points and Lindsay Allen 13.

It wasn’t the ideal start for the Lynx with a turnover and score on the break to Tiffany Mitchell for Melbourne, but that was about as bad as it got. Marina Mabrey hit a three the next possession down. She hit two more bombs from downtown in the opening two minutes and suddenly Perth led 9-4.

While Melbourne did score the next six points, the Lynx put their foot down with the next nine starting with Lauren Scherf and Darcee Garbin scoring inside. Sami Whitcomb then drained a three and Jackie Young scored in the mid-range for the 18-10 lead.

Young added six more points to close out the quarter and the Lynx were on top 27-18 after one.

The Lynx then started the second quarter on fire firstly with Scherf scoring on the inside and then with three balls to Mabrey and Whitcomb. Soon after a couple of consecutive triples from Garbin and Perth opened the quarter with a 16-1 run to suddenly lead 43-19.

It was a remarkable onslaught offensively but the defensive performance was equally impressive. The Lynx nailed eight of their first 12 threes and Perth continued right up to half-time.

They put up 60 points in the half in a remarkable performance while holding the Boomers to 32 to lead by 28 at the break away from home in the opening game of the Grand Final series.

There was no taking the foot off the gas from the Lynx in the third quarter. By the time captain Garbin continued her hot shooting by knocking down three more three-pointers, it was out to a 29-point ball game and still Perth were 26 points up by three quarter-time.

Alex Sharp then opened up the fourth quarter with her first of two long jumpers for the term to put the margin back out to 29. Mabrey also hit her fifth three-pointer of the game and in the end the Lynx cruised to the stunning 27-point road win in Game 1 of the Grand Final series.