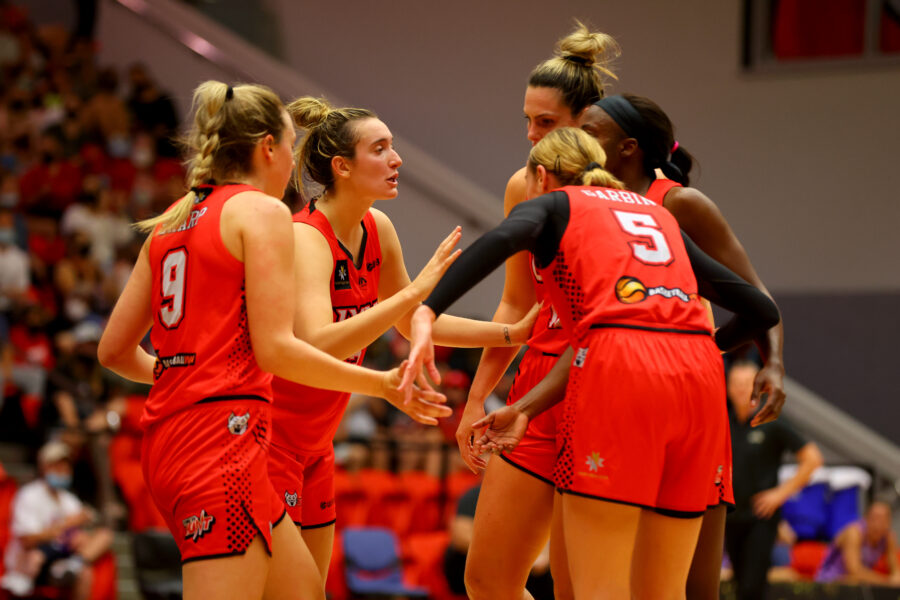 LYNX FOCUS ON WINNING IN MELBOURNE AFTER DRAMATIC GAME 2

Championships aren’t meant to be easy and if the Perth Lynx are to end a 30-year WNBL title drought it will now need to be won on the road after Melbourne Boomers won the most dramatic of Grand Final Game 2’s 76-75 on Wednesday night.

The Lynx entered Bendat Basketball Centre on a high for Game 2 on Wednesday having won the opening game of the Grand Final Series on Saturday in Melbourne 98-71.

That meant that just one win was needed for the Lynx to end the club’s championship drought that stretches back to 1992, and they started on song in the first quarter in front of a large and vocal home crowd.

Perth has been the best offensive team all season and that was on show in the opening quarter as they put up 28 points with Marina Mabrey putting up nine of them.

However, Melbourne has been the best defensive team all season and showed why over the next three quarters limiting Perth to 47 points the rest of the night.

The game turned into a physical and tense defensive grind, but still Perth kept fighting and had a chance in the most dramatic of finishes.

Melbourne led by five a couple of times in the last quarter and were still four up with 42.9 seconds left. However, Mabrey nailed her fifth triple of the night to make it a one-point game. She did the same with nine seconds remaining and it was a one-point margin again.

Cayla George hit two free-throws but the Lynx had one more chance. Mabrey was fouled and made the first two at the line, but couldn’t nail the third and Melbourne held on to win by one to force the decider on their home floor on Saturday.

The tension between the two teams was evident setting the stage for Saturday’s decider to determine the 2022 championship.

Marina Mabrey won’t want to hear it, but she had a terrific game for the Lynx with 30 points on 10/19 shooting including 4/8 from deep.

Darcee Garbin gave the Lynx the perfect start but Lindsay Allen started her big opening quarter with a three up the other end for the Boomers. Marina Mabrey then knocked down a couple of jumpers, and when Lauren Scherf and Jackie Young scored too, Perth was up 10-7.

Allen responded with her second three for Melbourne but when Young converted an and-one and Mabrey connected from deep, Perth were building momentum to lead 21-15.

Melbourne stayed in touch but still a Garbin three and those nine opening quarter points from Mabrey had the Lynx up 28-25 after one despite Mitchell’s 11 points for the Boomers.

However, when Allen nailed a prayer on the buzzer to go into half-time, she drained her fourth triple of the half for 19 points and as a result the Boomers were up 42-39.

Things went up a gear in the third quarter and it began with the first four points to Melbourne. Perth responded with the next eight which included a purple patch from Mabrey with an and-one and then a three to get the Lynx fans up and about, and their team back in front.

The Boomers were able to stem the tide and respond, though, starting with a George three. They then went on an 8-0 run for the biggest break of the game to be up eight and the Lynx needed a spark.

It came from Alex Sharp. Three massive offensive rebounds were largely responsible for the next eight points but Melbourne still led 59-56 on the back of Panina Davidson bucket on the buzzer.

It was then a last quarter that couldn’t have possibly packed more into it, starting with the first six points to the Lynx to see them turn that three-point deficit into a three-point lead.

The Boomers then assumed control back thanks to eight points on their own with Allen knocking down two more mid-range jumpers and Magbegor battling hard down low.

Another basket for Melbourne from Allen kept the visitors up four with two minutes to go but the Lynx weren’t going away thanks to a Mabrey three ball. George responded in kind to ensure the Boomers still led 74-70 with 42.9 seconds on the clock.

The drama was far from done yet. A Boomers turnover gave the Lynx a sniff and Mabrey took full advantage to drain yet another three ball and it was again a one-point game with 9.1 seconds left.

The Lynx had three fouls to make up but eventually sent George to the line. She hit two and Perth had one more chance with 6.3 seconds left.

Mabrey was fouled attempting a three as the drama continued to build. She made the first two but couldn’t get the third to fall, Melbourne collected the rebound and the title will be decided in Melbourne on Saturday.