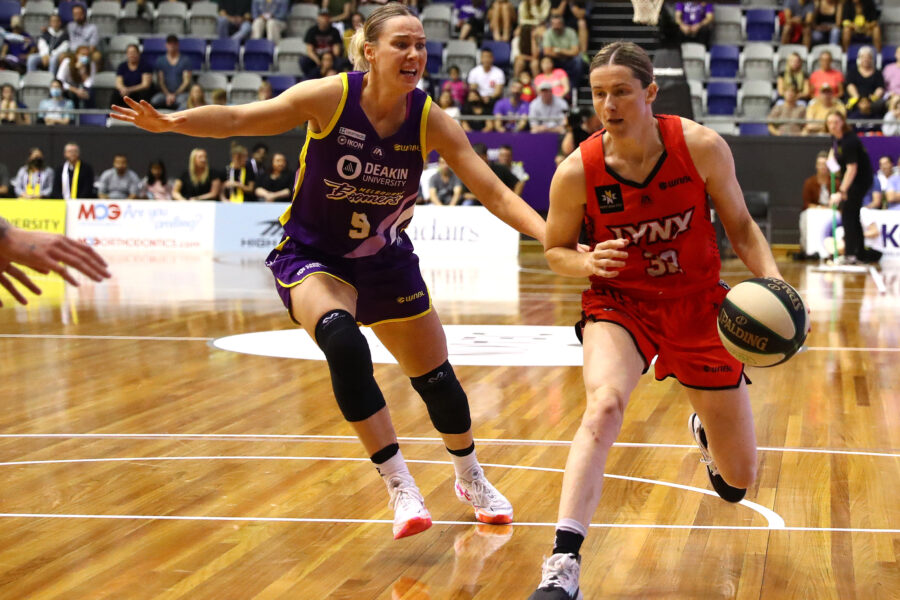 LYNX GIVE IT ALL BUT BOOMERS WIN WNBL CHAMPIONSHIP

To even be in a position to be competing for the WNBL championship on Saturday was quite the achievement with everything Perth Lynx has endured this season, but the Melbourne Boomers proved too strong to claim the title for the first time in 11 years.

There were moments the Lynx didn’t even know if they would be taking part in this WNBL season. They then had to sit and watch the first month go by without them part of it.

Then when they did join they had to do so by packing up and leaving home to base themselves out of Ballarat without knowing when they would get home. They did eventually get to come home for four matches at Bendat Basketball Centre to play in front of the locals for the first time in two years.

They ended up qualifying for the finals from second position, winning Game 1 against the UC Capitals in the semi finals which ended up getting them to the Grand Final where the opening game was played on their terms.

The up-tempo style was on fully display and as a result the Lynx blew the Boomers away to win 98-71 setting up the second game back in Perth on Wednesday night.

They started well there too with 28 points in the opening quarter and things were on their terms. However, the Boomers were able to turn things around and having been the best defensive team all season, they showed why.

They held the Lynx to 47 points the last three quarters to end up winning in dramatic fashion 76-75 setting up the deciding Game 3 on Saturday back in Melbourne.

The Boomers were able to play Game 3 largely on their terms as well to end up winning 84-66 and to win their second championship in the WNBL.

Jackie Young closed her brilliant first season in the WNBL where she was named to the All-First Team by putting up 18 points, three rebounds and two assists in Grand Final Game 3.

Sami Whitcomb did all she could to keep the Lynx in the contest with all 14 of her points coming in the first half. She also finished with six rebounds.

Marina Mabrey might have had an injury interruption in between, but she showed her match-winning abilities too in her first WNBL season and had 12 points, five rebounds, three assists and three steals in the decider.

The contributions across the board was again key for the Boomers with Cayla George delivering 17 points and 12 rebounds in Grand Final Game 3. Ezi Magbegor also had 17 points, 11 rebounds, three assists and two blocks.

Tiffany Mitchell finished with 16 points and seven rebounds, Tess Madgen 15 points on 5/9 shooting from deep, and Lindsay Allen 14 points and seven assists on her way to being named Grand Final MVP.

The Lynx scored first in the decider with Lauren Scherf rolling to the basket before a couple of three balls for Melbourne through Cayla George. Marina Mabrey hit a pair of free-throws and Jackie Young hit a jumper to keep Perth in touch.

Sami Whitcomb then nailed a three and Young connected on another bucket for Perth to lead 11-9. The Boomers finished the quarter on a 12-3 run, though, with Tiffany Mitchell leading the way to give the home team the 21-14 advantage.

Scores through Darcee Garbin, Whitcomb and Scherf kept Perth within five early in the second period too but Melbourne began to pull away. The lead was 10 after a triple from Tess Madgen and then 11 when Madgen connected again from deep.

Whitcomb was doing what she could to keep the Lynx close on her way to 14 points in the half, but Melbourne was just shooting the lights out and went into half-time leading 49-33.

Melbourne came out hot again to start the second half with the first four points before a steadying Lynx bucket to Mabrey. Young scored soon after for Perth, but the Boomers then blew it wide open with the next nine points for a 17-4 start to the half to lead by 29.

Emma Gandini and Alex Sharp came on to give the Lynx a spark but the margin was still 27 by three quarter-time.

The Lynx weren’t going to leave the Grand Final without fighting it out and they started the fourth quarter strongly, including going on a run of scoring 12 consecutive points to bring the margin back to 16.

This was the Boomers moment to celebrate, though, as they went on to win by 18 and claim the championship on their home floor.