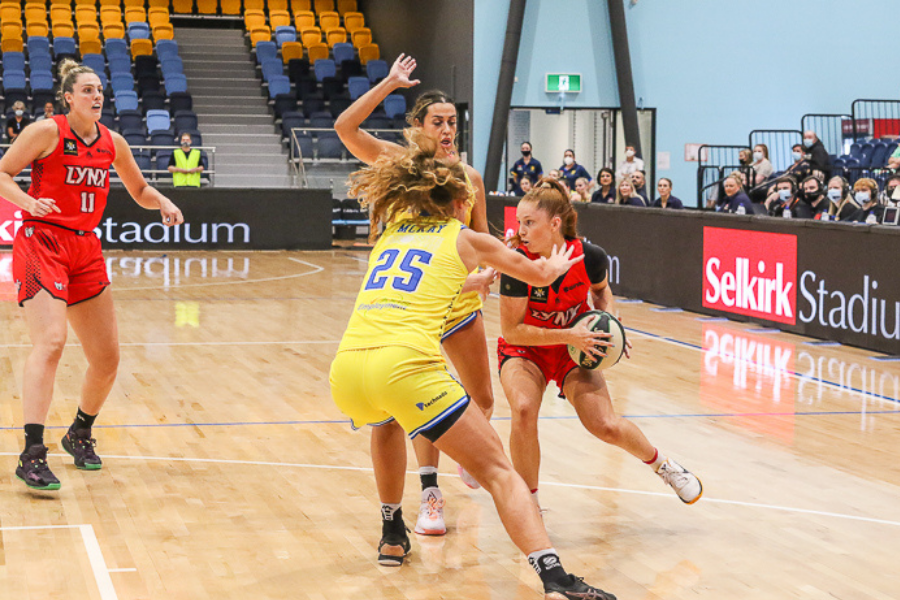 LYNX MAKE IT FOUR STRAIGHT WITH WIN OVER SPIRIT

The Perth Lynx are officially the hottest team in the WNBL and doing it all away from home overcoming the absence of the league’s leading scorer on Saturday to beat the Bendigo Spirit 90-82.

The Lynx brought a three-game winning streak into Saturday’s clash back at their home away from home in Ballarat. Despite Marina Mabrey not playing due to soreness, they were able to break the game open in the second quarter at Selkirk Stadium to deliver the eight-point win.

The Lynx would have been disappointed to conceded the last eight points of the first quarter, but they blew the game open the start the second with the opening 10 points.

They were able to maintain that advantage the rest of the way. Despite the Spirit fighting hard, they had all the answers including going on an 11-2 run midway through the fourth period to turn a four-point lead into a match winning 13-point edge.

It was a dominant rebounding performance from Perth with 41 boards to just 28 from Bendigo, with 10 of those 28 grabbed by Anneli Maley. The Lynx also had a good shooting night going 52 per cent from the field and 42 per cent from deep with 9/21.

On the back of posting a career-best 19 points in Thursday’s win over the Southside Flyers, Jackie Young eclipsed that in just her eighth WNBL game with 24 points and two assists on 10/18 shooting.

Sami Whitcomb picked up the scoring load in the absence of Mabrey too to finish with a season-best 23 points to go with five rebounds, three assists and two steals.

“It was just nice to step up when the team needed me a little bit more. Obviously we have a really good team right across the board and not just with Marina, but she does take a lot of attention with how skilled she is,” Whitcomb said.

“She’s so fun to watch and you find yourself watching her yourself as a teammate sometimes. But today we were without her so we needed everybody to step up a little bit and I just took that opportunity.”

Whitcomb was pleased that the Lynx picked up the defence and paid special tribute for the efforts of reigning NBL1 West Best Defensive Player Gandini for her tenacity.

“We just needed to play some defence honestly and get some stops. Offensively we have a lot of weapons but we had to lock in defensively,” Whitcomb said.

“I thought Gandini came in off the bench and really proved that to us by putting pressure on the ball handlers. We started to rebound a little better and I think that was really the difference.”

Maddie Garrick finished with 18 points on 4/9 from downtown for the Spirit with Tessa Lavey hitting 16 points and Ally Wilson 15 with both hitting four three-pointers as well.

Sami Whitcomb opened up the game with a three ball for the Lynx but the Spirit had come to Ballarat to put up a fight and soon led 13-10.

The Lynx, though, responded by hitting the next 10 points beginning with a triple from Darcee Garbin and finishing with an and-one to Jackie Young with Whitcomb hitting two more buckets in between.

Young added two consecutive field goals too to put the Lynx up eight but the Spirit closed the first term with the last eight points and scores were locked at 24-24 by quarter-time.

While Bendigo took an 8-0 run into quarter-time, Perth turned that on its head to start the second quarter by holding the Spirit scoreless for more than four minutes and scoring the opening 10 points.

That included Emma Gandini making the most of her chance to score with Young adding a couple more buckets and Whitcomb continuing her hot start.

The Lynx also finished the second period with the last seven points including Alex Sharp’s three-pointer and pair of free-throws from Gandini after an offensive board to see them lead 48-34 at the break.

It was the Spirit’s turn to start well in the third quarter and they opened the second with three quick three balls to get back within seven points, but the Lynx continued to have all the answers and were back out by double-digits.

After Bendigo again got back within six, Sharp knocked down her second long-range bomb for the game before a three-point play from Whitcomb and the Lynx still led 68-61 by the end of three.

Young added five more points for Perth to open up the fourth period but the Spirit weren’t going away and three-pointers to Maddie Garrick and Tessa Lavey helped them close the gap to four.

It was Ciabattoni who answered for Perth with the next five points before Garbin delivered a captain’s three-point bomb from the corner with 3:30 remaining to put the Lynx back up 11 before going on to claim the eight-point victory.

The Lynx now have a week’s break before heading back to Traralgon to play the Melbourne Boomers next Sunday attempting to win a fifth consecutive match.