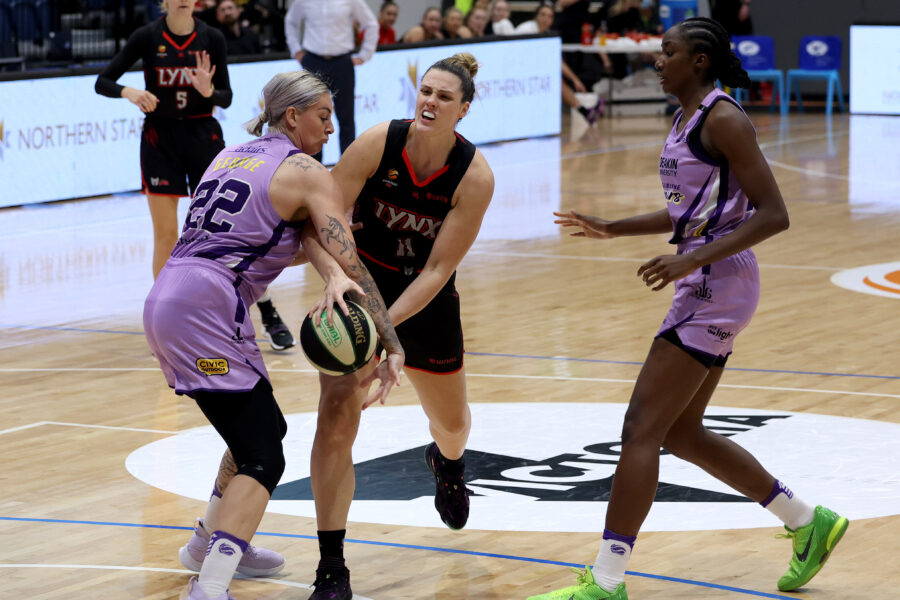 LYNX NARROWLY FALL TO BOOMERS BACK IN BALLARAT

The Perth Lynx returned to Ballarat and started on fire on Monday night with some hot shooting, but couldn’t quite maintain it as the Melbourne Boomers took out the 80-77 WNBL victory.

Despite coming into the season late, the Lynx had started their campaign impressively with a loss on the buzzer to the Adelaide Lightning followed by an overtime win against the Southside Flyers and then a rout on Friday in Canberra against the Capitals.

That meant they returned full of confidence to their home away from home in Ballarat on Monday for what was technically a home game despite the Boomers coming from Melbourne that’s just over an hour down the road.

The Lynx delivered some hot shooting in the opening half too with Lauren Scherf getting it rolling with 10 points and two triples in the opening term while captain Darcee Garbin put up 14 points on a perfect 4/4 from downtown in the first half.

Perth was able to open up a lead by as much as 12 points in the first half too, but the Boomers were able to apply the clamps in the second half.

The Lynx managed just 30 points in the second half after 47 in the first, and on the back of 22 points from Tiffany Mitchell and 19 from Cayla George, the Boomers rode that to the three-point win.

The eight missed free-throws and 16 turnovers didn’t help the cause of the Lynx while they also lost the rebounding count for the evening.

Captain Darcee Garbin finished with 18 points and six rebounds for Perth while hitting 4/7 from beyond the arc while fellow big Lauren Scherf added 18 points and five boards.

Marina Mabrey kept her hot early season form going by hitting the first two buckets of the game for the Lynx before they were able to go on an 8-0 run soon after. Five of those points came from captain Darcee Garbin for the 12-4 lead over the Boomers.

Lauren Scherf then knocked down a couple of big threes on her way to 10 points for the opening quarter and despite a pair of triples in response from Cayla George for Melbourne, the Lynx were on top 25-18 after one.

Sami Whitcomb then got going early in the second period knocking down back-to-back threes to keep the Lynx up six before Garbin hit two more from downtown of her own as part of an 8-0 run to push the lead out to double-figures.

Just as Perth had all the momentum, Melbourne threw Tess Madgen into the ball game and she scored 13 points in no time. It was only a Jackie Young score on the half-time buzzer that saw the Lynx go into the break leading 47-45.

Both teams combined for 92 points while shooting 15/29 from beyond the arc between them in the opening half, but the game sure underwent a dramatic transformation in the second half as scoring became decidedly more challenging.

It took almost half the quarter for the Lynx to hit a field goal and that was a three-point bomb from Ash Isenbarger. Alex Sharp scored late in the period to give Perth the narrow 59-58 edge still at three quarter-time.

Garbin then stretched Perth’s lead to three to start the fourth period and when Isenbarger knocked down her second triple of the half, the Lynx still led 66-65.

However, once the Boomers assumed the lead on the back of a fifth three of the night for George, they didn’t again surrender it. A couple of late Perth threes to Whitcomb and Scherf brought it back to a three-point game, but it wasn’t to be for the Lynx on this Monday night in Ballarat.

The action continues for the Lynx on Wednesday with a rematch from Friday when they take on the UC Capitals also in Ballarat.