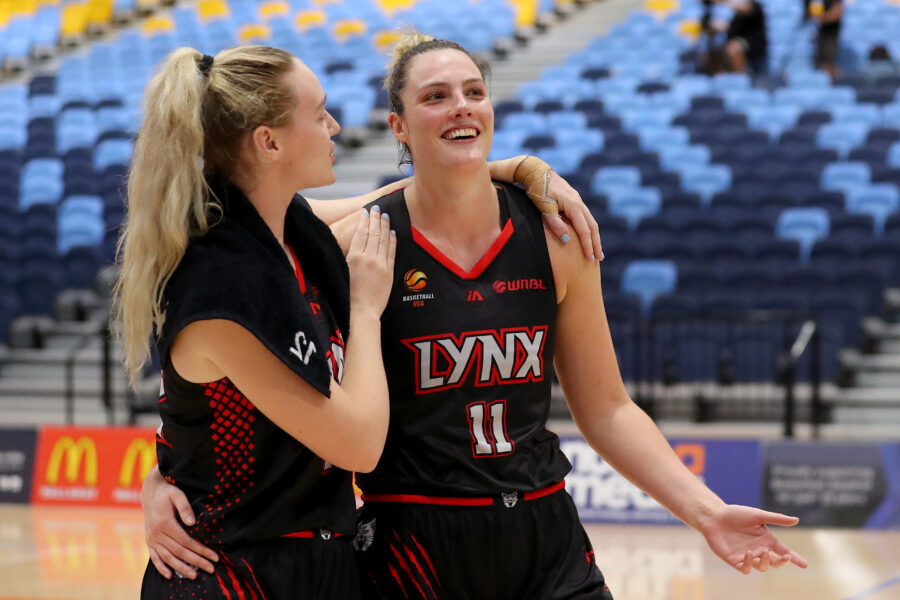 It was a second straight thriller for the Perth Lynx to open their WNBL season but this time they scored the last six points in overtime to overcome the defending champion Southside Flyers on Wednesday night.

The Lynx were playing just their second match of the 2021/22 WNBL season at their home away from home in Ballarat, but the challenge that awaited them were the defending champion Flyers to open Round 7 of the competition.

It turned out to be a tight and tense affair with both teams attempting to shake out the cobwebs. It just seemed destined to be another thriller for the Lynx after a heartbreaking loss first up almost a fortnight ago against the Adelaide Lightning.

It was captain Darcee Garbin who played the hero role late in regulation hitting the three-pointer to tie scores up. Then both teams struggled to find a basket in the overtime period.

The Flyers did score first after almost three minutes but from there the Lynx hit the next six points to win 83-79 and record their first WNBL victory since December 6, 2020 when they defeated the Adelaide Lightning in Townsville.

Alex Sharp might not have scored but did pull in seven rebounds to go with two steals.

Meanwhile, Sara Blicavs top-scored for the Flyers with 21 points while Kristy Wallace had 16 points and Rebecca Cole 13.

Playing just their second game of the WNBL season and with plenty of pent up energy, the Lynx came out to a flying start in Ballarat against the reigning champs. Sami Whitcomb scored first before Marina Mabrey picked up where she left off in Adelaide in the season-opener with a three-pointer.

Lauren Scherf then asserted her authority inside for the next two baskets and Perth was up 8-2 after three minutes. Scherf soon after had the Lynx up 10-5 but the Flyers soon steadied and finished the opening term strongly to lead 21-15 by quarter-time.

The Lynx again started the second quarter strongly and it was captain Darcee Garbin with five quick points before Mabrey got going again firstly with a three, then a turnaround jumper to tie scores up.

Then just as the Flyers looked to be pulling away, the Lynx fired back with a triple from Scherf. It was Scherf and Mabrey who also scored buckets heading towards half-time to cut Southside’s lead to 44-42 at the major break.

It didn’t take Perth long to assume the lead to start the third quarter and it was Mabrey again with five quick points out of the gate. Scherf then extended it to a three-point lead before Whitcomb maintained that with a three-point bomb.

The lead continued to fluctuate the rest of the third quarter before the Flyers went into three quarter-time with a 65-60 edge.

The Flyers were out to a game-high seven-point edge to start the fourth period but Jackie Young scored for the Lynx for a steadying two points. Whitcomb and Scherf then combined to bring the deficit back to three points and then Young got to the rack again to score and make it a one-point game.

It was a game destined for a big finish and with just over three minutes on the clock, Sara Blicavs drained a three for Southside to give them the 77-74 advantage.

Neither team executed how they would have hoped over the next three minutes, but eventually with the shot clock turned off, captain Garbin hit a huge contested three for the Lynx to tie up the scores at 77-apiece with 10.3 seconds remaining.

The Lynx then forced a turnover on the Flyers and had a chance at the winner but Mabrey couldn’t make the driving layup and we were on the way to overtime.

It took more than three minutes for the first score in the extra period and that went the way of the Flyers thanks to Madi Rocci, but it was all the Lynx from there.

Alex Ciabattoni finished well from a strong drive on the next possession to tie scores up before a wonderful bounce pass from Garbin to a rolling Scherf led to the go-ahead layup.

The Lynx then sealed the deal after an offensive rebound with two free throws to Mabrey for the 83-79 win.

The big Round 7 in the WNBL for the Lynx continues now on Friday in Canberra against the UC Capitals before then facing the Melbourne Boomers on Monday evening back in Ballarat.