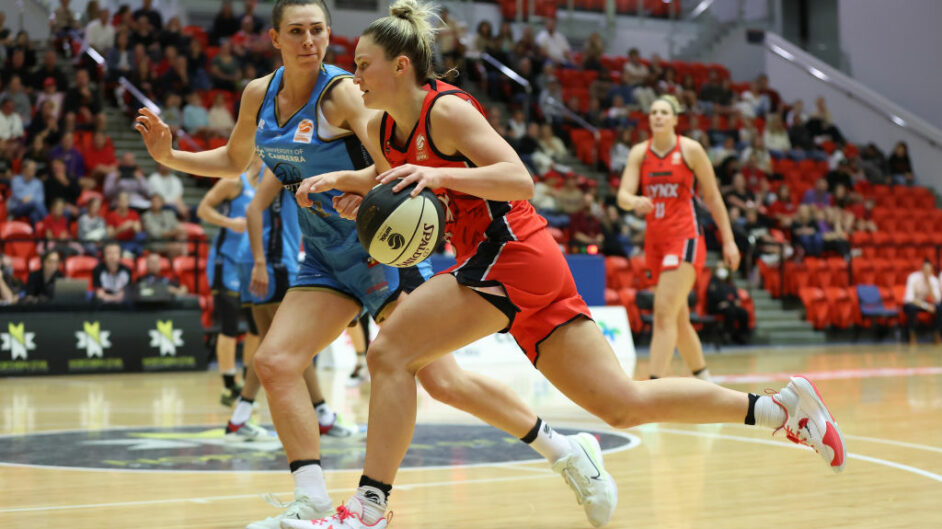 LYNX PUT ON A SHOW AT HOME TO BEAT CAPS

The Perth Lynx are on the board this WNBL season on the back of the offence executing smoothly and a strong defensive showing in an eventual 97-62 win against the UC Capitals at Bendat Basketball Centre on Saturday night.

The Lynx lost their opening two games of the 2022/23 WNBL season in Round 1 at home to the Melbourne Boomers and away to the Bendigo Spirit, but the Caps suffered a similar fate in defeats to Bendigo and the Townsville Fire.

Both teams were determined to open their accounts in Perth on Saturday night, but from the outset this was a smooth looking Lynx outfit with Sami Whitcomb and Amy Atwell catching fire scoring, and Lauren Scherf anchoring the defence.

Whitcomb and Atwell combined for 25 of the Lynx’s 27 points in a hot opening quarter before the lead got out to as much as the 21 points that was the difference by half-time.

Perth went on with the job too leading by as much as 25 points in the third quarter before going on to win by 35 to score their first win of #WNBL23 and offer a glimpse into what this team is capable of at both ends of the floor.

Standout performers on the night

It was a terrific offensive showing from the Lynx and they shot 51.8 per cent from the field while having 32 assists on 43 made field goals.

The defence was strong too holding the Caps to 38.0 shooting and 3/14 from downtown along with forcing 16 turnovers from which they scored 25 points.

Amy Atwell finished up top-scoring with 21 points on 10/13 shooting from the floor to go with three rebounds and two assists.

Lauren Scherf might not have had a big scoring night with six points, but she might have had the biggest impact of anyone in the game with 10 assists, nine rebounds, three blocked shots and two steals.

It was a tough night for the Capitals with 17 points and nine rebounds from Dekeiya Cohen, 12 points from Brittany Smart and 12 points, five rebounds, three assists and two steals from Shanice Swain.

The Lynx were chasing their first win of the season and the game couldn’t have started better with a bucket to Sami Whitcomb and huge block from Lauren Scherf on Shanice Swain to open proceedings.

Then after Canberra hit the next five points, Perth took control and it was the Whitcomb and Amy Atwell show.

They combined for Perth’s entire 11-0 run that saw them open up a 13-5 advantage before Whitcomb closed out the quarter with a pair of three balls and the Lynx went into quarter-time in control 27-17.

Whitcomb had 14 of the points and Atwell 11 with the pair shooting 11/13 from the field and 3/3 from downtown while the Lynx’s defence forced the Caps into eight turnovers.

It might not have been as much the Atwell-Whitcomb show in the second quarter from the Lynx, but it was an even more dominant affair with the offence firing and executing the best it has so far this season.

The Lynx found so many easy baskets on the back of picture perfect execution with the passer able to find the player rolling to the open basket with the Capitals having no answer for it.

That saw the Lynx put together eight straight points at one stage to see the lead grow to 20. Another 8-0 run which saw consecutive easy baskets at the rim for Chloe Bibby on the back of that perfect execution along with an Alex Sharp jumper and then again the same play for Jessie Edwards.

By half-time, Perth was in control leading 51-30 while shooting 52 per cent from the field with Atwell, Whitcomb and Bibby combining for 42 of the 51 points. The Lynx also forced the Caps into 11 turnovers from which they scored 19 first half points.

The Capitals scored the first six points of the second half, and 10 of the first 12 to cut the Lynx lead back to 13.

The Lynx quickly reassumed control, though, beginning with baskets to Bibby and Whitcomb. A three-pointer to Sharp followed by Scherf’s first points of the night and two more from Atwell then quickly had the margin out to a game-high 25 points.

The Lynx advantage was still 22 by three quarter-time before growing to beyond 30 early in the fourth. Sharp hit a triple while scoring five points in a 7-0 run before Robbi Ryan had her best patch in the WNBL with five quick points too to push the lead out to 33.

Emma Gandini and Bibby added three-point bombs too to see the Lynx advantage grow to 35 and then go on to win by that margin.

The Lynx remain at home to play host to the Sydney Flames at Bendat Basketball Centre before a two-week break before another home clash with the Melbourne Boomers on Friday December 2.