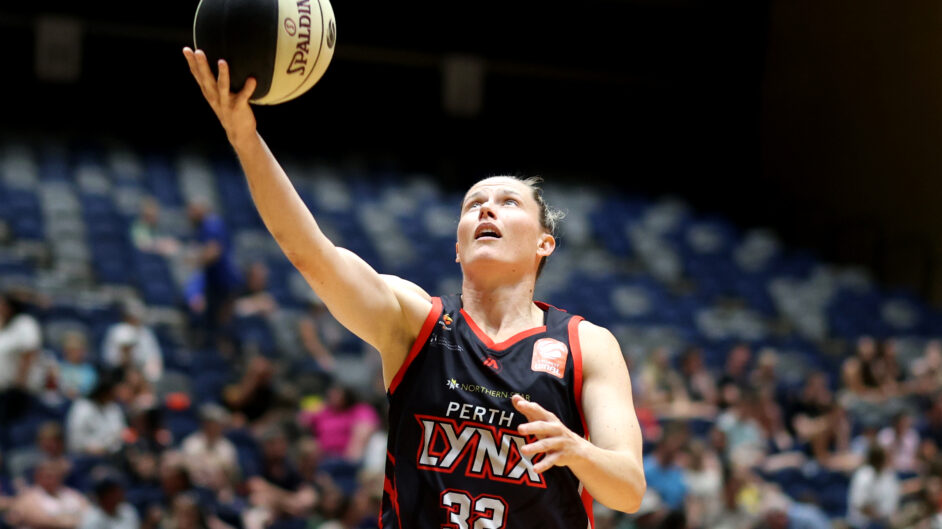 LYNX WIN IN BENDIGO TO MAKE IT SIX STRAIGHT

The Perth Lynx can lay claim to being the hottest team in the WNBL right now after notching a sixth straight victory on the back of a 26-4 run to close the second quarter before holding out the Bendigo Spirit 92-88.

The Lynx and Spirit both brought winning runs into Wednesday night’s clash at Bendigo’s Red Energy Arena. Even though Perth blew the game wide open in the second quarter, they had to withstand a huge finish from the team before securing the four-point win.

Lynx blow Spirit away, then hold on

It was a tight contest up until midway through the second quarter. With the Spirit leading by four points, the Lynx put on a remarkable offensive onslaught to close the first half to blow the game wide open.

Perth went on a 13-0 run, then another 11-0 run and eventually would score 26 of the last 30 points of the half to go from four points down to 18 points up at the break in the space of less than six minutes.

The Lynx would go on to lead by as much as 22 points as well to start the fourth quarter, but the Spirit then caught fire themselves and all of a sudden were back within two points with 35 seconds to play after an 18-3 run of their own.

However, the Lynx held firm with Sami Whitcomb icing the game at the foul line and securing the sixth consecutive victory to improve to an 8-5 record on the season to keep them right in the playoff race.

Who the standout performers were

Lynx captain Sami Whitcomb continued her terrific form backing up 52 points over the last two games with another 25 points to go with four rebounds and three assists on shooting 7/9 from the floor, 4/6 from beyond the arc and 7/8 at the foul line.

She had plenty of help too with Robbi Ryan putting up 15 points, five rebounds and two assists, Amy Atwell 12 points and five rebounds, and Chloe Bibby 11 points and three boards.

How the game played out

Robbi Ryan scored the game’s first basket but the Spirit were also on a winning streak coming into the clash and scored seven of the next nine points capped off by an Abbey Wehrung three ball to lead 7-4.

The Lynx did soon go on their own run and it was a hot start from Ryan with the point guard adding another five quick runs as a 7-0 scoring streak with Perth assuming a 15-12 lead.

However, Bendigo finished the opening quarter strongly with 14 of the last 21 points to go into the break leading 26-22 with seven quick points from Tess Lavey.

Bendigo was still leading 34-30 midway through the second quarter, but that’s when the Lynx caught fire and blew the game wide open, and would ultimately open up a match-winning advantage.

A 13-0 run started with an and-one play from Mackenzie Clinch Hoycard before a triple from Amy Atwell before Ryan, Lauren Scherf and Atwell all scored as well.

That took Perth from being four points down to leading by nine and then another 11-0 run just before half-time with three-point bombs from Atwell, Ryan and Sami Whitcomb pushed the lead out to 18.

That’s where it remained at half-time with a late bucket to Hoycard with the Lynx closing the first half on a stunning 26-4 scoring streak.

Triples early in the third quarter from Whitcomb and Chloe Bibby ensured the Lynx maintained a handy buffer and then it grew to as much as 20 points by three quarter-time.

Scherf pushed that lead out to 22 to start the fourth quarter as well and the Lynx still led by 17 when Whitcomb knocked down her fourth three-pointer of the game, but the Spirit weren’t done with yet.

The home team went on a three-point scoring spree with a couple from Anneli Maley, and then one each to Wehrung, Lavey and Kelly Wilson to all of a sudden make it a six-point ball game with two and-a-half minutes to play.

Whitcomb scored a steadying basket for Perth to make the lead eight once more but the Spirit kept charging. Back-to-back easy finishes under the rim from Alicia Froling saw Bendigo within four and then a Lavey knockdown with 35 seconds to play made it two.

The drama continued with a Whitcomb turnover when she lost control of the ball for the Lynx, but the visitors got a stop on the Spirit before Atwell missed two free-throws.

However, she was able to secure the offensive rebound, eventually Whitcomb knocked down two at the stripe and the sixth straight Lynx win was secured after a late heart flutter or two.

The Lynx now have one game to go on this week on the road against the league-leading defending champion Melbourne Boomers on Sunday before returning home for back-to-back games with the Townsville Fire next Wednesday and Saturday.