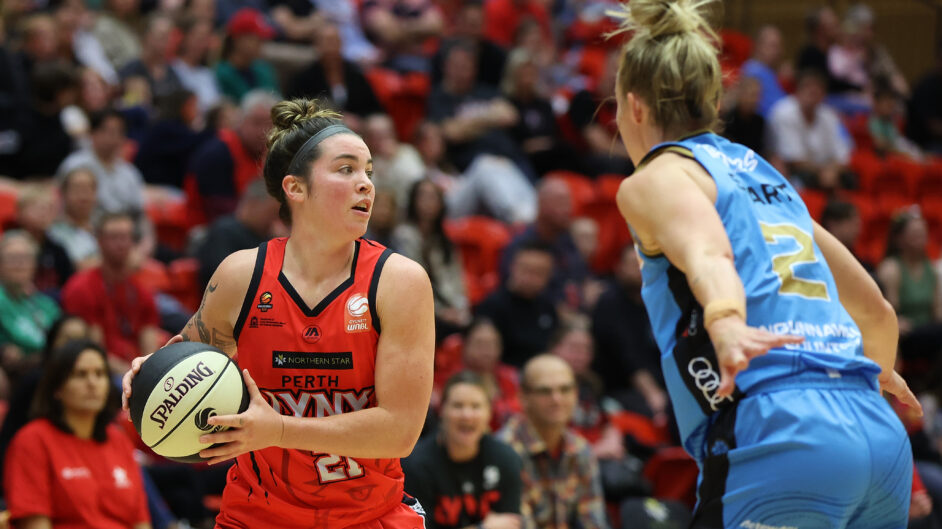 The Perth Lynx have had just over two weeks to take stock of the opening four games of the season before another crack at the Melbourne Boomers with coach Ryan Petrik glad to see some of his new faces finding their aggressive streak.

The Lynx opened up the WNBL season with 16 and 19-point losses at the hands of the Boomers and Bendigo Spirit, but then hit back impressive at home to beat the UC Capitals by 35 points and then the Sydney Flames by eight.

That sees them sit at 2-2 with the general WNBL bye last week before resuming now this Friday night back at Bendat Basketball Centre with a second grand final rematch already of the season against the Boomers.

Looking back on that 80-72 win against Sydney before the break, there was a lot for Petrik to like including having five players scoring in double-figures, and in particular Robbi Ryan and Amy Atwell unlocking their aggressive sides in impressive performances.

Petrik might not have quite liked everything about the performance, but was feeling pretty good about the way the Lynx had gone into the break.

“I was a bit annoyed with the third quarter, I thought we had them against the ropes and just couldn’t knock them out,” Petrik said.

“We had four straight bunny layups, four straight free-throws and missed all of it to keep the door ajar, and a good team came through it. We made it way harder than what we should have but the response in the fourth was really good.”

The Lynx signed Ryan as an import guard on the back of her standout NBL1 West season at the Joondalup Wolves. She might have had her struggles in the first three games of her WNBL career, but Petrik kept his faith that she would find her groove.

The biggest thing for him was for her to back herself and be aggressive, and play to her strengths. That’s what she did a lot more effectively against the Flames where she finished with 13 points, six rebounds and four assists.

Even more impressive was that she played the game through an eye injury that threatened to sideline her as well, but seeing her alongside Sami Whitcomb was an especially encouraging sign for Petrik.

“Having the two playmakers on the floor was huge, but also every time in either practice or our pre-season games, and late against Canberra, when Robbi has said stuff this, I’m going to just go and hoop, she’s amazing,” he said.

“It’s when she over thinks it and slows it down or they get up and into her, and she freaks out is when things don’t turn out as well. But every time she’s played on instinct, she’s been elite. We really liked her for a reason and she started to show glimpses of what she’s capable of.”

Petrik harks back to the slow start to the last season Jackie Young had with the Lynx. By the time she warmed up to playing in the WNBL, she might well have been the best player in the league and went on to have a superstar level WNBA season.

Petrik is always willing to give an import new to the WNBL a bit of a grace period, and now hopes to see Ryan build on what she was able to show against Sydney two weeks ago.

“We knew she could really play and internally we really believe in Robbi Ryan, she just hadn’t showed it yet, but in this game you saw a lot of glimpses of what she’s capable of,” Petrik said.

“She was great. Generally it takes someone about six games. Remember last season, Jackie Young was pretty bloody average early and she finishes by far the best player in the competition.

“Part of that was COVID but part of it was she just didn’t play well early, but once she got it going she was really good after that. It’s not uncommon for an import to have a slow start.”

Atwell is another player with the Lynx new to the WNBL this season and she’s warming to the task nicely too now.

The WNBA draftee put up 36 points in the last two games, both wins, for the Lynx on the back of three game-clinching three-pointers down the stretch against the Flames.

Petrik saw a similar thing with her, where he just wanted Atwell to be more aggressive and back herself, and the results have been obvious in the last two games.

“It’s a similar thing with Amy, in games one and two she was really passive. Really passive,” Petrik said.

“We had a similar conversation to just go and be ultra aggressive, and we’ll dial you back if we need to, but I can’t do much with the passive version of yourself.

“I just told her to be aggressive and that I’ll tell her when to dial it back, and you saw it against Canberra that she just started to shoot it from everywhere.

“Just like Whitcomb and she’s had that advice from me for 10 years. She took it to heart from day one, Robbi and Amy have taken two or three games and that’s fine.”

Four games into the WNBL season and Petrik isn’t quite sure of where the Lynx sit in terms of the competition or fully what his group is capable of, but he is getting a clearer picture after the last two matches than after the first two.

“We really have no idea about where we sit to be honest. I think Southside and Melbourne are really good and then the remaining six you can probably throw a blanket over them,” he said.

“In our last game they were up six, we were up eight and we finish up winning by eight. Sometimes you over think it and had we finished those shots early we might have been up 12, 14 or 16 in the third quarter and it’s over.

“But we don’t and three minutes later they are back in front. Sometimes it is as simple as the ball did go in or it didn’t go in.”

The break also came at a good time for the Lynx according to Petrik as they now prepare to take on the Boomers again on Friday night at home looking for revenge on that season opening loss.

“We had a lot of grumbles body wise and muscle wise. No one was necessarily injured, but everyone was sore after those first four games,” Petrik said.

“So it was about a bit of rest and then going to work on some things. It’s a good sample size to see how teams are going to go after us and we have the chance to now go and adjust some things.”