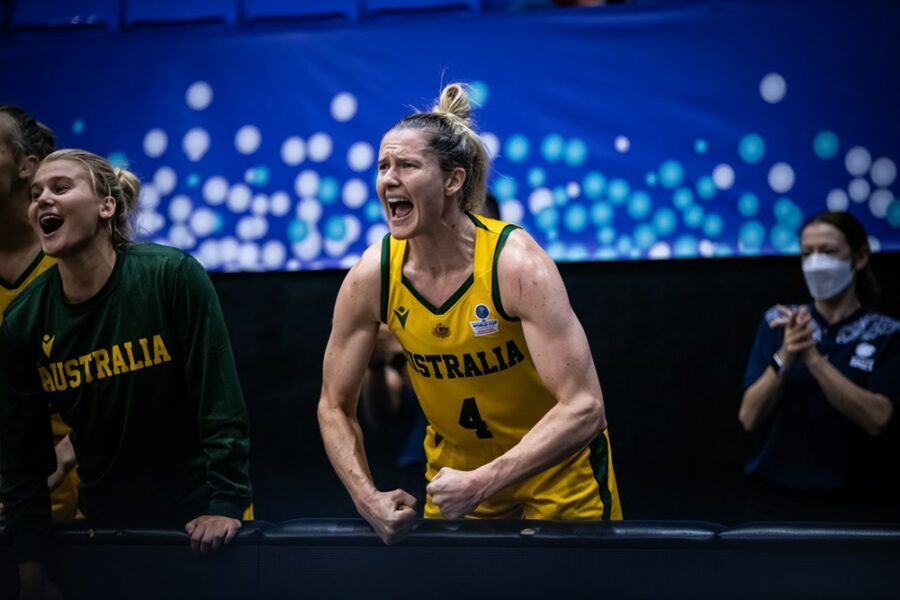 After leading the FIBA Asia Cup team to a bronze medal in 2021, Whitcomb’s leadership on the court did not go unnoticed to the likes of Coach Sandy Brondello, the high-performance team and fellow Opals teammates. She joined her Perth Lynx leader Darcee Garbin in making a strong contribution to Thursday night’s 65-52 win over Brazil in Belgrade, Serbia.

The Opals are in Serbia to play three matches as part of the FIBA World Cup Qualifying Tournament ahead of the World Cup to be held in Sydney later this year. They made a winning start on the back of a hot opening to Thursday night’s contest.

Australia scored the opening 11 points of the game and held Brazil scoreless for more than the first six minutes. The Opals were able to consolidate that the rest of the way to end up winning by 13 points.

Both teams would have come away feeling they will play much better after getting the first game out of the way. The Opals shot just 35.8 per cent from the field and 20.7 per cent from three while Brazil went at 30.5 and 26.7.

Neither team took great care of the ball either with 17 turnovers from Australia and 24 for Brazil. The Opals scored 25 off those from Brazil while they themselves managed 19 from Australia turning the ball over.

However, 13 offensive boards for 19 second chance points was a bright spot for Australia and really, the final margin of 13 was flattering to Brazil and didn’t tell the full story of the Opals’ dominance.

The two Perth Lynx representatives in the Opals team made a strong contribution as well. Sami Whitcomb was captain and hit the first five points on her way to 11 for the game to go with four assists, four steals and two rebounds.

The Opals set up the eventual win with the way they started the game. It began with a breakaway layup from captain Sami Whitcomb.

She soon connected from beyond the arc as well and before long, the Opals had kept Brazil scoreless for the opening six minutes and had put on 11 points in that time themselves.

Really that remained around the margin for the rest of the contest with Brazil at no stage ever seriously threatening to get back within single digits.

Eventually the Brazilians scored more than six minutes into the game with a jumper from Alana Goncalo but the Opals were in control leading 20-10 by quarter-time.

Darcee Garbin scored first to open the second quarter to put the Opals back out to a 12-point lead and just a couple of minutes later, Whitcomb scored again and Australia’s lead grew to 16.

Whitcomb was then able to set up a three-pointer from Steph Talbot and in the end, the Opals went into half-time leading Brazil 36-20.

Not only was Whitcomb scoring, but as she has shown with the Lynx this season in the WNBL, she’s a more than willing passer and she found Cayla George for the opening score of the second half.

It was Garbin who put the Opals back up 19 to start the fourth period and the lead stayed around that mark most of the rest of the way even though Brazil was able to pull it back a little late to make it a 13-point ball game as time expired.

The Opals are next up against Serbia on Sunday morning at 4am WST and then Korea at 10pm on Sunday evening.