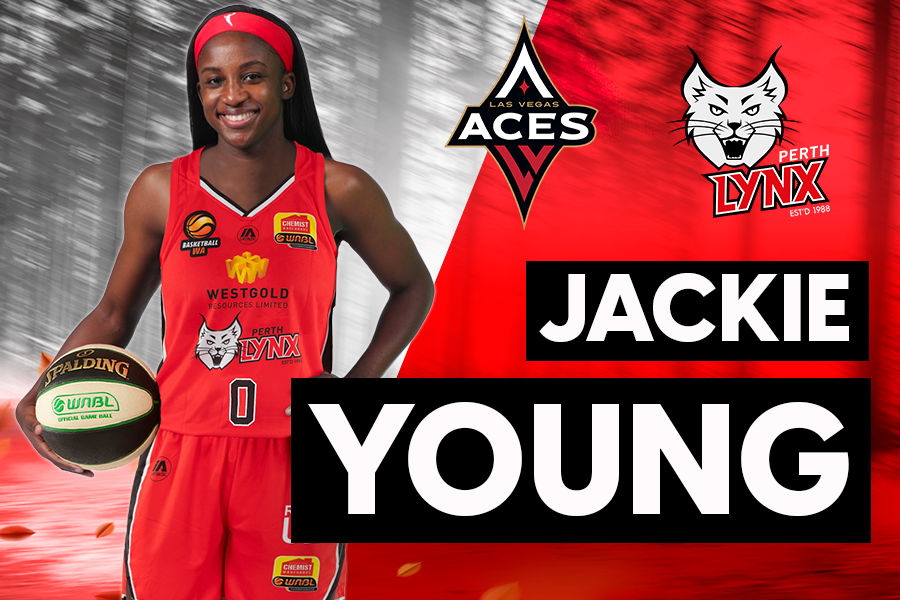 The Perth Lynx have an ace up their sleeve and are thrilled to announce the signing of 2019 #1 WNBA Draft Pick, Tokyo 2020 Olympic Gold Medalist and Las Vegas Aces star Jackie Young to the roster for Season 2021/22.

Young was a part of the U.S. Olympic 3×3 Women’s Basketball Team (8-1) who earned their first gold medal in Olympic 3×3 basketball history after defeating the Russian Olympic Committee (6-3) 18-15 on Wednesday night at Aomi Urban Sports Park on Saturday in Tokyo.

In contention for the 2021 WNBA Most Improved Player Award, Young is having a standout second season with Las Vegas averaging 13 points, 3 rebounds, 3 assists per game and 30+ minutes a game. Young is a graduate of Notre Dame, a confident, aggressive, and decisive player, where she still holds the record of scoring 12 double-doubles in a season (2018-2019) for a guard in their junior year.

At only 24 years of age, she also has international experience under her belt, attending the USA Basketball 3×3 Olympic Qualifying Tournament training camp and playing a season for Ramat Hasharon in the Israeli League (D1). Averaging 22 points a game, Young showcased her raw talent and ability to thrive in International Leagues, which made securing her signature for the upcoming WNBL season a big priority for the Perth Lynx.

Head Coach Ryan Petrik is excited to see Jackie thrive in the WNBL, saying, “Jackie is an efficient shooter, with a great mid-range game, and capability to play multiple positions in our system.”

“We love her passing ability, and the fact she can rebound for a guard is a bonus. Jackie will also bring a real length and a physical presence on both ends of the court. Being a 6-foot guard with size and speed, she gives us even more defensive flexibility than we already had”

“For our club to land a number 1 overall WNBA draft pick is a huge get. Additionally, Jackie played with Marina and won an NCAA championship with Notre Dame in D1 college, so they’ve already got an intimate knowledge of each other’s game that should make their transition to the WNBL and our program that much easier for the both of them.”

Young is looking forward to experiencing life in a new location and new culture, adding, “I am pumped to get there, meet my new teammates and start exploring Australia. The Perth Lynx is a first-class organisation with a great atmosphere. I can’t wait to play for them.