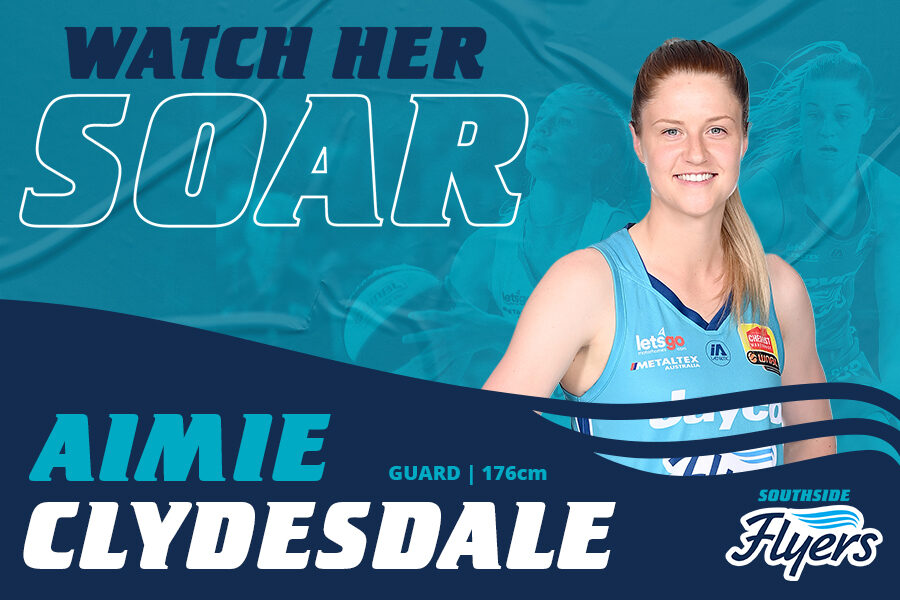 AIMIE STICKING TO A GOOD THING AT THE FLYERS

Dual WNBL Championship player, Aimie Clydesdale, has confirmed her commitment to the Flyers and is looking forward to another exciting season and helping Southside defend the Championship.

“I have really enjoyed being part of the Flyers team since day one and it is amazing how, in just two years, we have developed a real family feeling. There is no questioning the work ethic of the team, importantly we have the balance right and we have fun, ensuring it is enjoyable for everyone.

“A Grand Final in the first season and then a Championship has set high standards which is why we play the game, to be the best we can. I am looking forward to helping the Flyers maintain the standards and the challenges that will be part of the upcoming season, it will be exciting,” Aimie said.

For the second season in a row Aimie was required to ‘stand up’ for the Flyers in the last few games, including the semi-final when captain Jenna O’Hea was out injured. While Jenna courageously returned for the Grand Final, she was limited to 17 minutes, with Aimie playing 33 minutes in the Championship decider as an integral part of the Flyers Championship Team.

“It is such a pleasure coaching Aimie, she is an incredible team first player who accepts a role that is best for the team and seamlessly makes it happen. She is a super athlete, quick on her feet, drives to the basket, and her defensive work is fantastic. She puts real pressure on the opposition at both ends of the court.,” Cheryl said.

Aimie started her basketball journey with the Dandenong Under 12s and was an Australian Junior representative in the Under 17s and then in the Under 19s. She was part of the Gold Medal winning Australian Under 19 team in the Oceania Junior Championships in 2010 and a member of the team that finished 4th in the FIBA World Championships the following year.

In 2017 Aimie was a member of the Gold Medal winning team at the World University Games.

Her WNBL career started with the Dandenong Rangers in 2010 where she continued until 2017 and was a member of the Rangers WNBL Championship team in 2012. She moved to Adelaide to join the Lightning for two seasons in 2017 before returning to Melbourne to be part of the inaugural Flyers team in 2019.

Register your details now and be the first to know the latest news from your Flyers – click here.