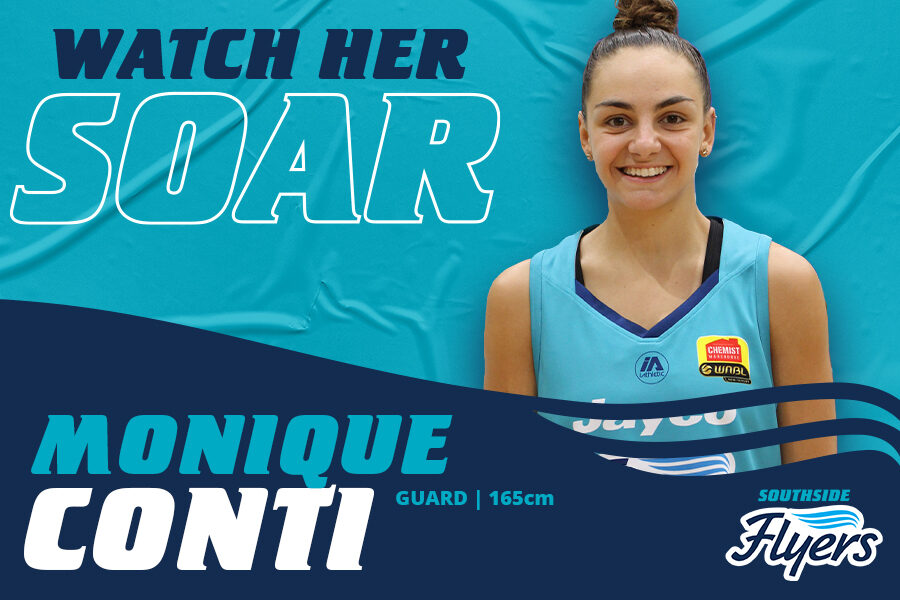 Monique Conti will resume her WNBL career with the Flyers in the upcoming WNBL season in North Queensland.

After successfully combining her basketball and football careers, Conti put her WNBL career on hold in January this year to focus on the 2020 AFLW season. It was a tough decision for the 20 year old who loves both sports, but it certainly paid off with Monique winning the Richmond AFLW Best & Fairest Award.

And now she has decided to join the Flyers for the 2020 WNBL season.

“I’m super excited for the upcoming season and to be part of the Flyers. It is a great opportunity to play WNBL again,” Monique said prior to training at Dandenong Basketball Stadium on Monday.

“It is going to be an amazing experience to be playing alongside Lei, Sara, Steph, Rach and Aimie, and to be back again playing with Liz, Coley, Pizz and of course Jenna. I know it will be hard work, but it will also be a lot of fun. I will learn a lot from these girls and especially from Cheryl and Snelly who are fantastic coaches,” added Monique.

Coach Cheryl Chambers is delighted to have Conti join the Flyers and knows she is a great addition to the team.

“Mon will add some real tenacity, speed and pressure to our backcourt. Offensively she has the ability to push the ball hard in transition, score herself or find the open player & her ability to hit the 3 will help spread the floor for our team.

“Defensively, she is quick & agile & we look forward Mon creating havoc on the other teams point guards,” Cheryl said.

Conti started playing basketball as a 5-year old and combined basketball and football as a junior. In 2017 she was a member of Australia’s Under 17 Gold Medal winning team (along with Flyers teammate Bec Pizzey) in the World Championships in Spain and was named point guard in the All-Tournament team. She played with Melbourne Boomers in the WNBL from 2016 to 2020 and was the WNBL Rookie of the Year in 2017.

In her other sporting code Conti was a member of the Western Bulldogs AFLW Premiership team in 2018, winning Best on Ground in the Grand Final. In 2019 she won the Western Bulldogs Best & Fairest and was selected in the AFLW All-Australian team. Moving to Richmond for the 2020 season she had another outstanding season winning the inaugural Richmond AFLW Best & Fairest.

There is no doubt about her being one of Australia’s best dual-sport athletes and the WNBL season being played in a hub in November and December provided her with the opportunity to once again combine both sports. And she is thrilled to be able to be part of both elite competitions over the next few months.

“I am really grateful for the support I have from the Flyers and Richmond to be able to take this opportunity and compete at both WNBL and AFLW once again.”

While Richmond will no doubt be looking forward to Conti being back with the team for the 2021 season, there is no doubt her focus right now is on playing basketball for Southside Flyers and helping the team to go one better in 2020.

While the season will be played away from home, supporters will be have the opportunity to be virtually ‘Up Close and Personal’ with the team through some special Flyers Memberships options! To receive details as soon as they are released you can register your interest today here.