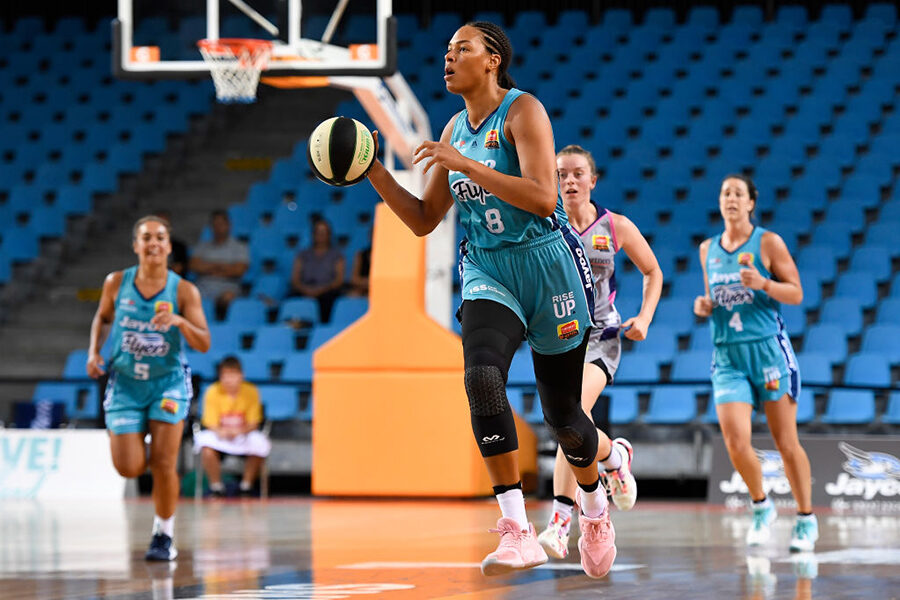 Flyers Dominate Lightning Again But Jarry Goes Down With Injury

An injury to Rachel Jarry was the only complaint for Jayco Southside Flyers after their 111-72 win over Adelaide Lightning during the 2020 Chemist Warehouse WNBL in Cairns on Wednesday.

Opals superstar Liz Cambage was only used for two quarters but still piled on 29 points in just over 17 minutes as the Flyers claimed their fourth straight win.

The bench also came up big for the Flyers who leapfrogged two-time defending champions UC Capitals to move to the top of the WNBL table with an 8-2 record.

But it may have come at a price.

Former Opal and WNBA championship winner Jarry was helped off the court with a suspected leg injury after going down in the final minute of the match.

The Flyers will be sweating on a medical update on Jarry who plays a key role off the bench for the star-studded outfit.

“We hope it’s the best possible news we can get,” Flyers captain Jenna O’Hea said.

The Flyers looked deflated after Jarry went down but there was no stopping the Southside juggernaut on Wednesday.

Besides Cambage, O’Hea (18 points, six assists) was all class, as every Flyers player got on the scoreboard in a dominant display as they backed up from Sunday’s 31-point win over the Lightning (4-3 record).

“We are slowly getting better. We definitely feel we are in sync now and leading into the finals that is really important,” Opals skipper O’Hea said.

Even the Flyers felt for Adelaide who are tackling a hectic schedule after emerging last week from seven days in quarantine in Townsville following a coronavirus cluster in South Australia.

“They have had a tough schedule. After quarantine, their schedule is particularly brutal but they gave everything tonight,” O’Hea said.

After being rested on Sunday, key guard Alex Wilson returned for Adelaide but even she couldn’t stop the Flyers at Cairns Pop-Up Arena.

Wilson hit a team-high 13 points plus nine rebounds but Opals star Steph Talbot – who is second in the league for scoring and rebounds – was well held by the Flyers’ suffocating defence, limited to 11 points and six boards.

“We are super disappointed. We lay down pretty early which is not our style of play,” Wilson said.

“I think a lot of us played timid. I don’t know why.

“We have a tough schedule, probably tougher than anyone else’s but we can’t use that as an excuse.”

Cambage had 16 points in the first quarter as the Flyers jumped to a 29-22 lead at the opening break.

She received a tech foul on the quarter-time buzzer and was not sighted in the second term but the Flyers still went on a 15-0 run to lead 60-39 at halftime.

Cambage emerged in the third quarter to help the Flyers lead 90-59 at the final interval.

She watched the final quarter from the bench as the Flyers remarkably hit triple figures for the sixth time this season, with Rebecca Cole (16 points) and bench livewire Monique Conti (10 points, five rebounds) also impressing.

The Flyers next take on Deakin Melbourne Boomers in Cairns on Sunday while Adelaide backing up against Capitals in Townsville on Friday.