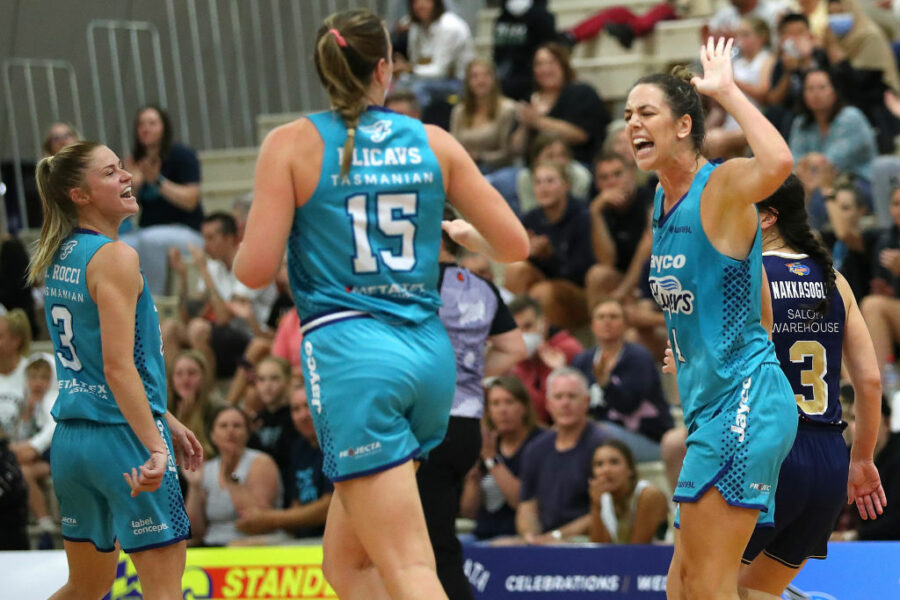 Last night’s match would be Jenna O’Hea’s last game at Deandenong Stadium, as she announced earlier this week. After 297 games, and counting, in the WNBL Jenna will retire at the end of this season, coming to the end of a fabulous basketball career. It was also an important night for Maddison Rocci who was playing in her 100th WNBL game, which will be the first milestone of many to come for the young star.

Jenna, Maddy and the Flyers were matched up against the Sydney Uni Flames who were hot after a win against the top of the ladder in the Lynx last weekend. Unfortunately, they would carry that momentum over and take down our Flyers, 66-68.

The game had everything you could ask for except the W. The crowd was full of Flyers fans there to cheer Jenna on and support our Southsiders in their last home game for the season. The energy was high in the stands but also on the court with both team’s players.

Buckets were traded most of the first quarter with the game becoming tense and physical within the first 10 minutes. The defensive pressure was electric and it was evident both teams wanted this one.

Sara Blicavs worked her way down low and provided some early buckets along with Captain O’Hea who was ready to show why she has been so relevant for so long. It was Kelly Froling and Shyla Heal, fellow Opals teammates, who would fire up for the Flames and provide headaches to the Flyers all night.

Coming into the second quarter with a six-point deficit, the Flyers ramped up their intensity and started to find their offensive rhythm. Bec Cole was again a stand out on offense for Southside, going four from six from the three-point line. Maddy Rocci got hot in her 100th game and provided some crucial buckets over Heal to give cut the deficit and end up with a two-point lead at half time. The first half was topped off with an O’Hea three and the energy within the building was all there for it. With every steal, shot or assist O’Hea made, the crowd was with her.

O’Hea would use her basketball IQ to open the second half and use a slip screen twice in a row to give herself easy lanes to the basket, with assists from the Rocci sisters, Aimie and Maddy. It felt like Southside were inching away with this game but as we know basketball is a game of runs and the Flames would soon have theirs. Katie Deeble created some noise before the third quarter ended and gave the Flames another six-point lead going into the last ten minutes, a position the Flyers knew they had to get themselves out of.

Unfortunately, the fairy-tale ending would not be given as the Flyers battled all quarter led by their Captain O’Hea, but were unable to get over the line, going down by only two points. Although there wasn’t a win, the last quarter did provide a beautiful moment for all watching, when Jenna was able to hit an open three in the corner to tie the game and you could see how much basketball has and forever will mean to her while she celebrated with passion and her team mates around her.

We want to thank all the Southside Flyers family who has come out this season to support us at home, no matter the results on the scoreboard. It’s been a bumpy season with game cancellations, injuries and COVID-interruptions, but we’ve loved being back at home in Victoria, playing for all of our Southside Flyers Family and can’t wait to see you all again soon.

Until next season Dandenong Stadium!