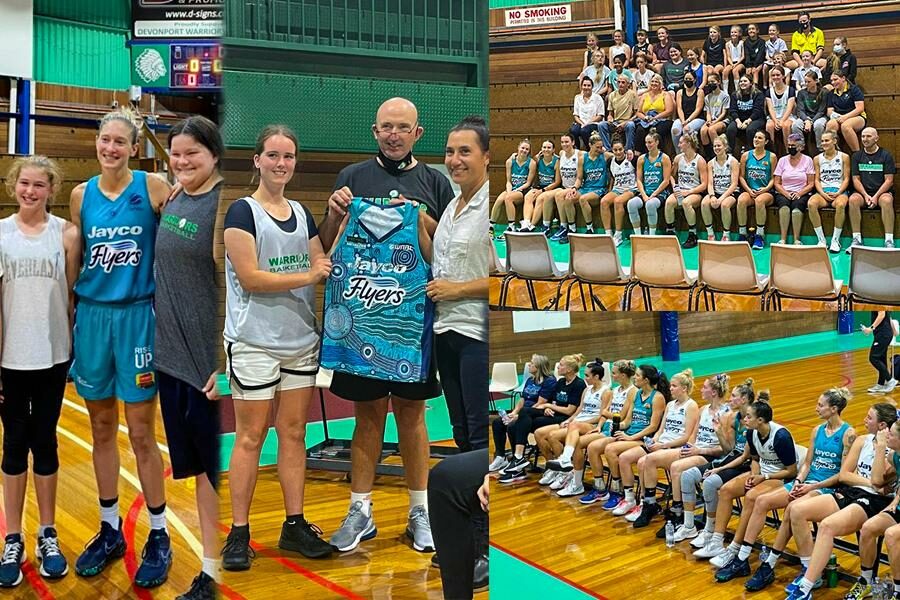 MORE THAN BASKETBALL IN TASMANIA FOR THE FLYERS

Flyers out in the community to promote the game and women’s sport as part of the visit to Tasmania.

While the result of Saturday night’s game at MyState Bank Arena in Hobart was disappointing, it hasn’t stopped the Flyers in their key role to promote the game and women’s sport throughout Tasmania.

The work with the community began on Saturday with three different clinics and the Basketball Tasmania Camp for the state under 16 and under 18 training squads. All players were involved during the day as part of the players’ commitment to support basketball in the Hobart region.

Following a weights session at Swisherr Hoops Academy in Hobart on Monday morning, the team got on the Redline bus and headed to Devonport for an afternoon with the local basketball club and the community. The Devonport Recreation Centre became the real centre of activities for Tasmania’s northwest on Monday afternoon with the Flyers speaking with the media and then presenting signed playing jerseys to the local community before an open training session.

Following a solid training session, the players sat down for a question and answer session with local basketball players and community members who took time out to attend the training session.

“It was a really special day. Just being with the local community and having the opportunity to speak with the young players and their parents and people from Devonport was fantastic. I know the team appreciated this opportunity and I hope everyone in attendance enjoyed the afternoon,” said Sara Blicavs. The Flyers time in Tasmania is not only about the two games against Bendigo Spirit. Through the support of the Tasmanian Government the week long visit is about the games, promoting the game and elite athletes, being involved in the community and importantly, promoting women in sport.

After a morning in Launceston on Tuesday, the team returned to Hobart on the Redline bus to prepare for Wednesday night’s game against the Spirit at MyState Bank Arena. Tickets for the game are still available through Ticketek. Tip off is at 6:00pm.