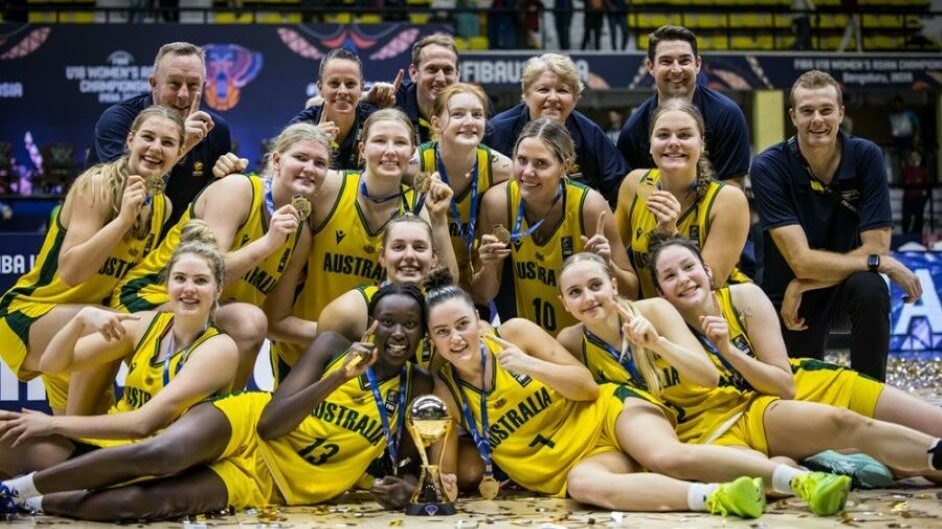 Gems success a tonic for the Opals preparations on the eve of the FIBA Women’s World Cup in Sydney.

It has been a whirlwind few weeks for new Flyers, Dallas Loughridge and Nyadiew Puoch. After being announced as part of the Flyers team, the 18 year-olds played an important part in the Australian Gems (U18) winning the Gold Medal at the 2022 FIBA Women’s Asian Cup Championships in India.

Five wins from the five games, including the Grand Final victory 81-55 against China has secured Australia’s spot at the 2023 World Cup in Madid in July next year.

Dallas and Nyadiew are not strangers to international competition, both having represented Australia at last year’s Under 19 World Cup in Hungary where Australia won the silver medal, and earlier this year in the Emerging Opals game against Japan.

“It is always a great honour to represent your country and having the opportunity to travel and be part of the team is always a great experience. Obviously, winning the Championship added to the experience for the whole team,” Nyadiew said on her return to Melbourne.

“I always love representing Australia and our goal was to win the Championship in India, so it was great to achieve this. Playing against other countries is a great experience as there are different styles of play and we always keep learning,” Dallas said.

Flyers coach Cheryl Chambers, who is with the Opals for the World Cup in Sydney, starting on September 22, the experience for Dallas and Nyadiew was invaluable.

“Being involved in these international tournaments is an awesome experience for Dallas and Nards. Their performances confirmed they belong in that international arena, they showed how they will help the Flyers, and I am sure they will enjoy international careers as they go forward. I am looking forward to seeing what they bring to our team,” Cheryl said from Opals training this week.

Both Dallas and Nyadiew are back in Melbourne and have wasted no time getting ready to start their career with Southside Flyers.

“Winning a Gold Medal at the Asian Cup was fantastic, now my focus is on the Flyers and continuing to improve my game to ensure I take the next step into the WNBL. Speaking with some of the Flyers players has added to this exciting time and I want to make the most of it and be part of a successful team,” said Dallas.

Like Dallas, Nyadiew is also looking forward to starting to work with her new teammates at the Flyers.

“Watching Cheryl coach the Flyers, as well as her involvement with the Opals, and then talking to her about the upcoming season has given me a lot of confidence and I am really looking forward to being part of the Flyers,” Nyadiew said.

The Flyers will commence their 2022/23 WNBL season with a home game at the State Basketball Centre on Saturday November 5. Membership, providing the best reserved seats for the nine home games is now on sale.