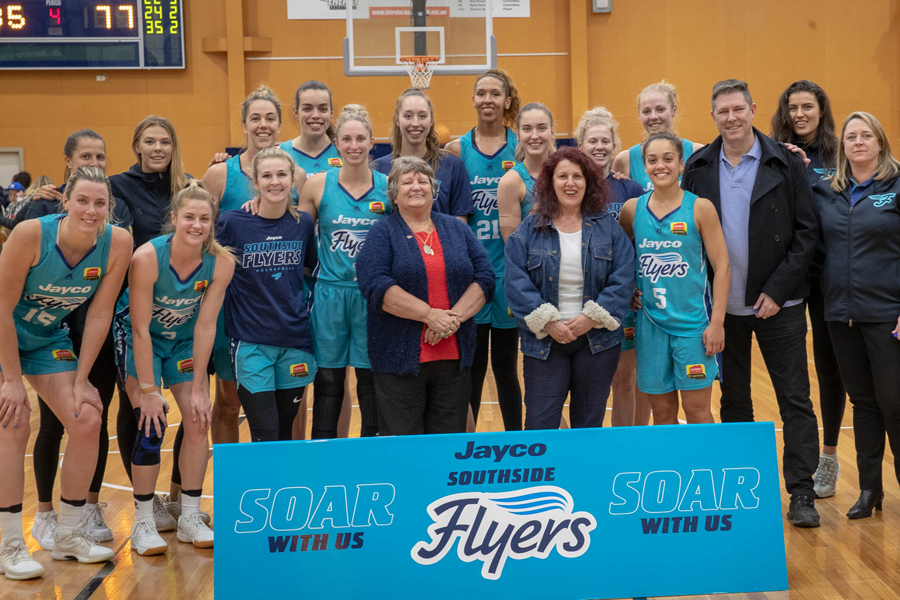 Our Jayco Southside Flyers enjoyed success at their second home on Saturday all while extending their unbeaten start to the Chemist Warehouse WNBL season.

The Flyers moved to 4-0 with a gritty 85-77 win over the Bendigo Spirit at Traralgon Stadium on Saturday afternoon. Southside led from start to finish but fought off a late charge by a spirited Bendigo to prevail in front of a healthy local crowd.

Fan favourite Sara Blicavs produced her best game in teal to date with a game-high 23 points along with two rebounds and an assist.

The Flyers have continued the strong relationship the Dandenong Rangers had built with Latrobe City Council, taking a home game to the regional centre each year. Ahead of the game, O’Hea and Russell visited the town last week to promote the club’s visit and rub shoulders with the locals.

This fixture had extra significance for Flyers captain O’Hea who was born and bred in Traralgon, learning her craft at the stadium.

The Flyers along with the Melbourne Boomers remain the only unbeaten sides after Round 3.

A massive weekend looms for Southside who are on TV for the first time this Sunday with our home game against the Bendigo Spirit Fox Sports’ match for broadcast at 5pm.

Then just over 24 hours later, we’re headed down the road to the State Basketball Centre to face the Melbourne Boomers in the first leg of the Michele Timms Cup.

As the WNBL’s two Melbourne clubs, there’s always been an intense rivalry between the near-neighbours going right back to the Bulleen Boomers/Dandenong Rangers days.

And this clash will have plenty of feeling.

Our skipper O’Hea joined us this season after two years at the Boomers as captain, while former Rangers coach Larissa Anderson is now an assistant coach for the Boomers.

Southside coach Cheryl Chambers led the Bulleen Boomers for many years, winning two WNBL Coach of the Year accolades and taking the club to its first ever Grand Final in 2008/09.