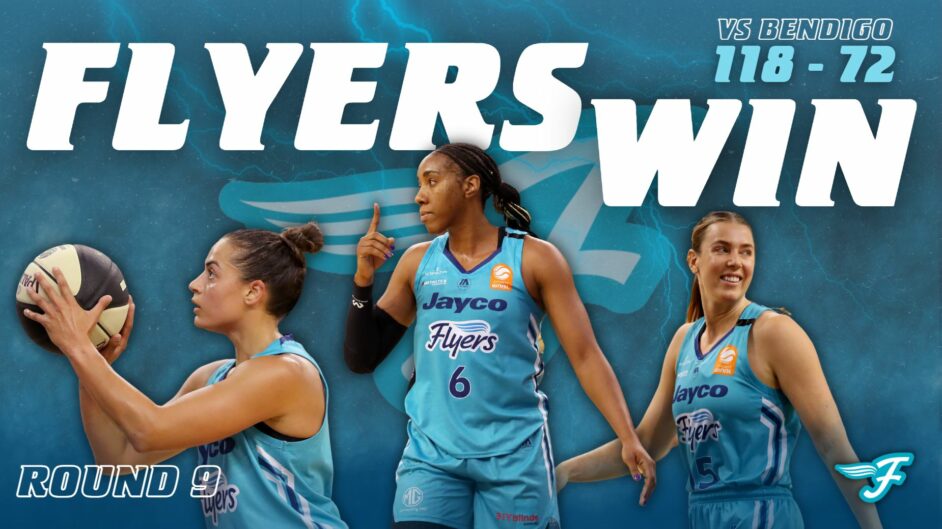 Flyers top the ton in big win over the Spirit

A big crowd was expecting a tough game and it was certainly that with both teams keen to gain the ascendancy. The Spirit opened the scoring and had a 2-point lead after 30-seconds and with teams trading baskets early on the Flyers were a point down after three minutes. This was the last time the Flyers were behind for the rest of the game.

While the Flyers were called for eight first period fouls, and the blood rule forced Bec Cole to leave the court with a cut beneath her chin, the physical game didn’t stop the scoring. At the end of the first period, it was the Flyers leading 31-27 with “Special K’ (Kayla Thornton) leading the way with 12-points.

The scoring continued in the second period with Maddy Rocci adding nine points to her seven in the first period and ‘Special K’ adding a further seven, including a huge buzzer beater from near half court to end the period with the Flyers enjoying a 16-point lead 59-43.

A Spirit fightback was expected and when they scored the first four-points of the second half to trail by 12, the question was asked of the Flyers. It seemed every time the Flyers needed to respond they did, and with outstanding shooting, had opened a 21-point lead midway through the third period.

The physical nature of the game was highlighted at the buzzer to end the third period when ‘Special K’ was greeted with an Aussie Rules style ‘hip and shoulder’ that sent her to the floor. Thankfully, aside from some obvious disappointment at the treatment, it did not escalate and while Kayla had a quick rest in the change rooms, the Flyers went into the final quarter with a 28-point lead.

With the result not in doubt, the final quarter was about game time with all 12 players from both teams on the floor during the game. Georgia Pineau, Holly Griffiths and Lana Hollingsworth all added to the scoresheet for the Flyers with Wednesday night’s hero, Sara Blicavs (41 points), the only player not to register a score. However, Sara only took four shots, focusing on a strong defensive game to restrict the Spirit’s offensive game.

The Flyers enjoyed a strong 46-point victory 118-72 in what was another team performance at both ends of the court. Kayla Thornton led the scoring with 23 points, Maddy Rocci 21, Mon Conti 16, Lauren Jackson and Nyadiew Puoch both had 14, and Bec Cole and Carley Ernst both had 11.

The Flyers next game is on Friday January 13 in Perth, with another three interstate games in January before returning to Melbourne for home games in February.

A great finish to 2022 has continued with two big victories to start 2023. The excitement is building for the fans, however there is a long way to go in the season, so it is back to work for the team as they fly to Perth this week to play the Lynx on Friday January 13. The first of four interstate games for the Flyers in January before returning to Melbourne for home games in February.

Look out for the special 3-game membership packages for the Flyers final three home games at the State Basketball Centre.