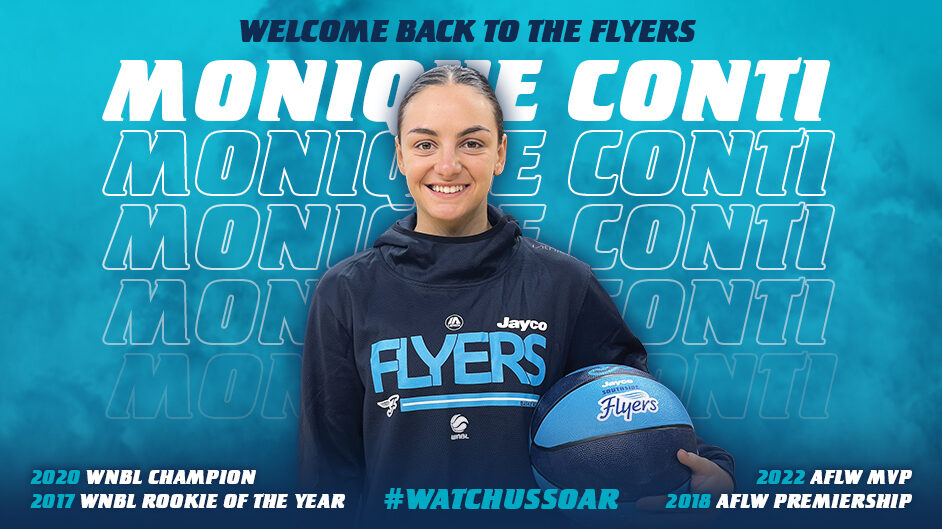 One of Australia’s most successful multi-sport athletes, Monique Conti, will resume her WNBL career with the Flyers for the remainder of the 2022/23 WNBL season.

A member of the Flyers 2020 Championship Team, Conti put her WNBL career on hold to focus on her very successful AFLW career with the Richmond Tigers in 2021 and 2022. As well as leading her team into the AFLW finals this last season, Conti was named the MVP of the AFLW season by her peers.

Two days after being announced the MVP, Conti was at the State Basketball Centre for a training session with the Flyers to prepare for the remainder of the season.

“I’m thrilled to have this opportunity and really excited to be back with the Flyers. I loved being part of the team in 2020 and appreciate how fortunate I am to be able to come back and play WNBL. The change of dates for the AFLW season allows me to once again combine the two sports.

“I am excited about this opportunity and to be playing under Cheryl, and of course the chance to play with LJ, I know I am going to learn a lot,” Monique said after a training session with her new teammates.

The Flyers had a place on the roster available due to the season ending knee injury suffered by Dallas Loughridge in the pre-season. While Dallas will be with the team for the season, she will be focusing on her rehabilitation and recovery to return to playing next season.

While appreciating how tough the injury has been for Loughridge, Coach Cheryl Chambers said it was important, and fortunate, to be able to welcome an experienced young guard to the team.

“Losing Dallas was hugely disappointing, for her and for the team, she is an outstanding young player. How fortunate we are to have a guard available to join the team.

“Mon will certainly be fit after her AFLW season and as we saw in 2020, she will add some real tenacity, speed, and pressure to our backcourt. Defensively she is very quick and agile, and I am sure she will create havoc on the other teams point guards. Offensively she has the ability to push the ball hard in transition, score herself or find the open player & her ability to hit the 3 will help spread the floor for our team,” Chery said.

Conti started playing basketball as a 5-year old and combined basketball and football as a junior. In 2017 she was a member of Australia’s Under 17 Gold Medal winning team in the World Championships in Spain and was named point guard in the All-Tournament team. She played with Melbourne Boomers in the WNBL from 2016 to 2020 and was the WNBL Rookie of the Year in 2017.

In her other sporting code Conti was a member of the Western Bulldogs AFLW Premiership team in 2018, winning Best on Ground in the Grand Final. In 2019 she won the Western Bulldogs Best & Fairest and was selected in the AFLW All-Australian team. Moving to Richmond for the 2020 season she has gone on to win three consecutive Best & Fairest Awards and been named in three more AFLW All Australian teams as well as being named the league’s MVP for the last season.

At just 22 years of age, Conti already has an outstanding sporting resume, and now she is keen to add to that with a successful WNBL season with the Flyers.

Conti will resume her career with the Flyers this Thursday night in the Flyers home game against the Sydney Flames at the State Basketball Centre.