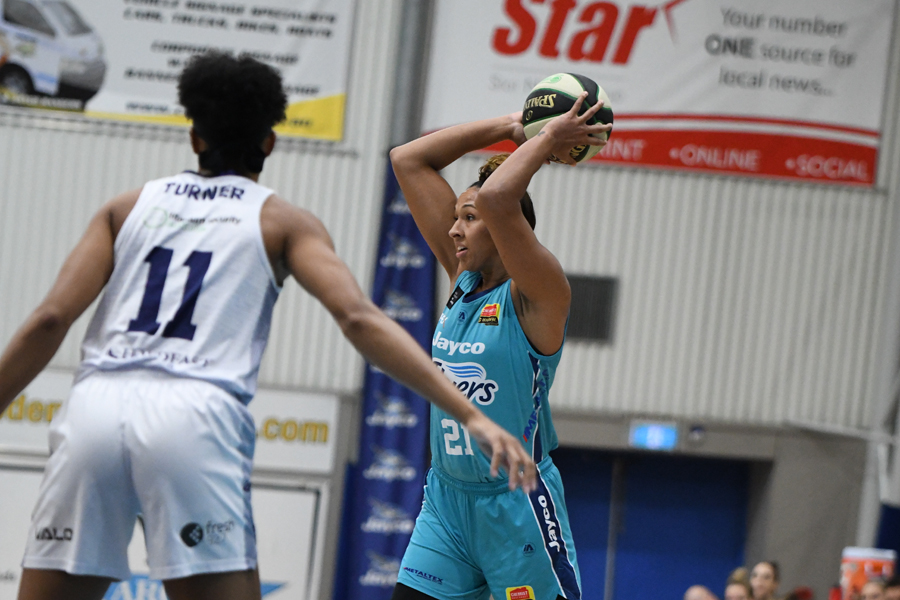 The Southside Flyers defeated the Adelaide Lightning 68-65 to claim Game 1 of the WNBL Semi Final series at Dandenong Stadium.

After a sluggish start the Flyers found themselves quickly playing catch-up. Early shot-making in transition from the Lightning had Southside on the back foot.

However a dominant third quarter performance, led by Mercedes Russell, galvanised the minor premiers and helped them push towards a comeback.

“The two weeks off of us not being together showed a bit in the first quarter, but we have such a good vibe and positivity within the group… we stuck with it and got the job done.”

In her first game since winning the Robyn Maher Defensive Player Of The Year award, Russell finished with 20 points and 19 rebounds, a dominant display at both ends of the floor.

“[We decided] just go to Slim [Mercedes Russell] inside, she was a great offensive target for us tonight and we just kept going into her,” Cole said.

Leilani Mitchell also had a big outing for Southside, scoring 15 points and serving as a calming presence for her team whenever the game started to look a little too frantic.

The finals atmosphere was unmistakable and a rainy Tuesday night felt like Saturday night prime time.

The Flyers Family came to see a show and displayed a passion for its Flyers that served as a testament to the impression Southside made in its inaugural season – full of fire and determination before the game even started.

Being the first game of a three game playoff series, understandably both sides showed some nerves early. With so much on the line, the tension in Dandenong Stadium was palpable.

As both the top seed and the home side, Southside was expected to win. However pressure can make even the toughest outfits crumble.

Conversely, with less expectation on it’s shoulders Adelaide found a rhythm before the Flyers and played with a real sense of freedom early, striking first and jumping out to a 22-11 lead behind eight quick points from Talbot.

Southside soon settled in thanks to the veteran leadership of Leilani Mitchell and the remainder of the half was an arm wrestle, with Adelaide going into the main break up just five points.

The 3rd quarter told the tale as the Lightning were held to only seven, giving up their half time advantage and giving our Southside stars a double digit lead going into the 4th.

“We had momentum going into halftime and I think we kept that for the second half and played solid defence as a team which was really good,” Russell said in her post-game press conference.

After a hard fought final ten minutes, with Adelaide refusing to quit, Southside just managed to hold on and come out three point victors.

Part of the Flyers last-minute strength came from you Flyers Family! Your support was crucial in the dying minutes of this one as our Flyers hung on to take the W and a 1-0 series lead going into Game 2 this Saturday.

Our Southsiders will now rest and recover ahead of this huge closeout oppourtunity, with a win at Adelaide’s Titanium Security Arena securing a Grand Finals series spot.

You can catch all the action LIVE from 7:00PM on Fox Sports Ch. 506 and Kayo Sports, to sign up for a FREE 14-Day Kayo trial visit: https://kayosports.com.au/

One more W and we’re soaring into the WNBL Grand Final series Flyers Family, what a wild ride #WNBL20 has been!