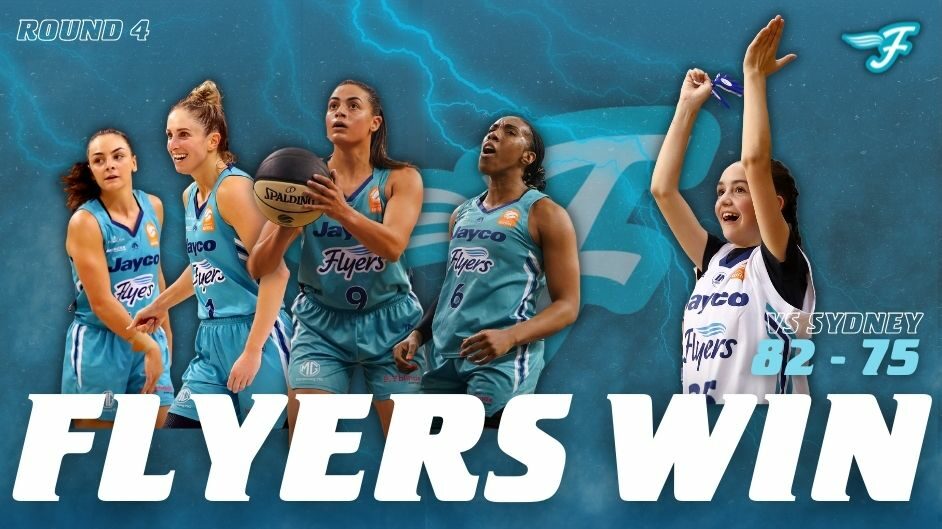 GO FLYERS – BACK WITH A VICTORY

FLYERS BACK WITH A VICTORY AGAINST THE FLAMES

The Flyers remained undefeated at their new home following the victory over Sydney Flames at the State Basketball Centre on Thursday night.

The 7-point victory (82-75), in what was a physical encounter, was an important one after not playing for two weeks, particularly without Lauren Jackson who was a late withdrawal from the game due to illness.

Coach Cheryl Chambers said it was great to be back playing after two weeks off and getting the win was important to get the momentum going.

“It was important to get that win, particularly after a couple of weeks off. It was a little unorthodox at times and we kept letting them creep back into the game. In the fourth quarter we really stepped it up on defence which resulted in good transition, our ball movement was much better and the shot taking was also better,” Cheryl said.

The Flyers shot 48% from the field and 44% from beyond the arc, with Bec Cole 24, Kayla Thornton 20 and Sara Blicavs 13 leading the scoring. Blicavs added 8 rebounds and 5 assists to her game. Monique Conti played 20 minutes in her return to the WNBL and dished out 5 assists. 14 of Bec Cole’s game high 24-points came in the final quarter as she brought the Flyers home.

“We certainly stepped it up and ‘Coley’ was super, she has that desire to always find a way to win,” Cheryl said.

The Flyers travel to Adelaide on Friday afternoon to prepare for the game against the Lightning on Saturday at Adelaide Arena, commencing at 7:00pm local time (7:30pm AEDT). Lauren Jackson is expected to be available for the game which will be live on 9Now.

For the Flyers this is part of the program and while it is a quick turn-around, it is something they are looking forward to.

“It is great to keep going, particularly after the last couple of weeks, we want to play more games as it is going to help us continue to improve,” Cheryl said.

Next week, in round 5, the Flyers will head to Perth to play the Lynx on Thursday December 8, before returning to Melbourne for the next home game: