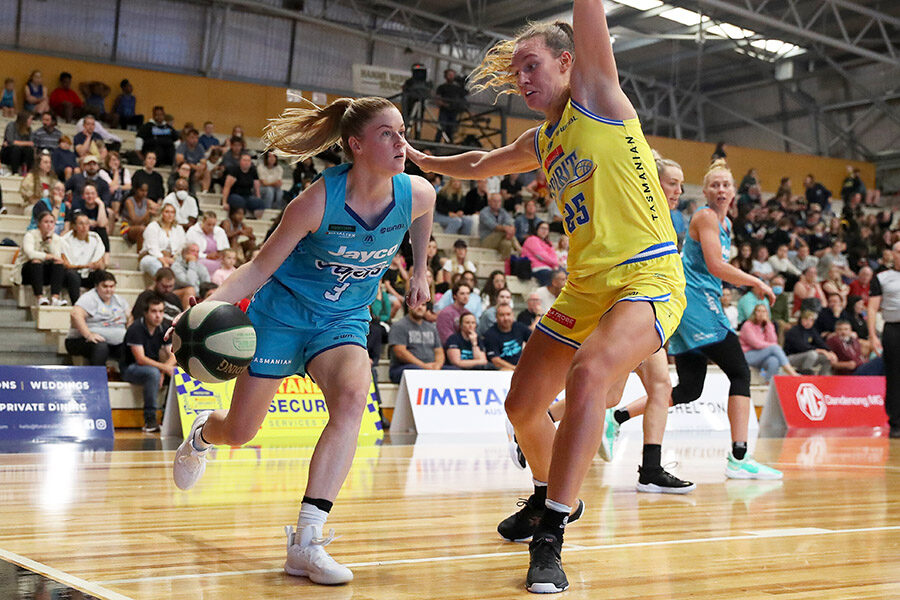 SEASON OFF TO A FLYING START – Flyers Round One Recap

The presentation of the 2020 WNBL Championship banner pre-game was the start of the celebrations for the Southside Flyers on Saturday night with a victory in the season opener getting the Championship defence underway with a W.

The Flyers proved too strong for Bendigo Spirit at Dandenong Stadium on Saturday night, enjoying an 11-point victory to commence the new season.

The new-look Flyers line-up started slowly before firing up the jets in the second quarter, outscoring the Spirit 25-15 and keeping them at arm’s length for the rest of the contest.

In her return to the WNBL Abby Bishop made an impressive start to her career with the Flyers. A double-double – 20 points and 11 rebounds as well as adding four assists and four blocks to an all-round game, had not only the fans but also the coach, Cheryl Chambers very happy.

“Abby is such an awesome addition to our team. Her ability to score from inside and out makes her difficult to guard, adding to that the fact that she has such experience and is an elite passer really aids us getting great shots for our team and we were able to use our size advantage with Sara Blicavs, which proved a success,” Chambers said post-match.

Coming off her Olympic debut earlier in the year, Sara Blicavs showed additional confidence from the experience and led the scoring with 27-points on her way to a double-double with 11 rebounds, earning MVP honours.

Bec Cole was also busy during the season opener, adding 24 points, along with her usual up-tempo game and captain Jenna O’Hea was another to reach double figures with 16-points. Maddy Rocci, also playing her first game for the Flyers displayed her team first attitude with a game high 8 assists and a strong defensive game.

They now look ahead to consecutive blockbuster matchups with the Melbourne Boomers, taking them on at MSC Parkville this Saturday night followed by a rematch at Dandenong Stadium on Saturday December 18th.

Good start for our Southsiders, the championship defense is off to a flying start! Thanks for coming our Flyers Family, see you on December 18th for a special Christmas themed Flyers home game!