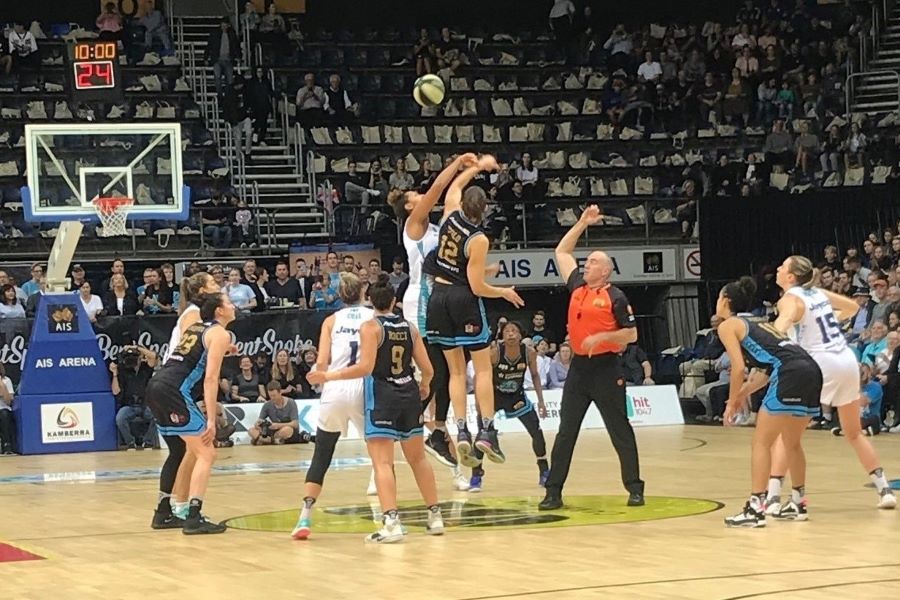 In many ways it was a case of Deja vu for the Southside Flyers in Game 2 of the Grand Final series in Canberra on Wednesday night. Once again it was a game the Flyers had opportunities to win, but, as in game one, it was the Capitals who prevailed at the final buzzer as the Flyers scoring dried up in the final two minutes of the game.

After a wonderful first half, the Flyers led by ten points at half-time (45-35), having led by as much as 16 during the second period. Bec Cole leading all scorers with 19-points. However, against the reigning premiers, in front of the very vocal home crowd of 4,481 at AIS Arena in Canberra, the Capitals were always going to make a run.

The start of the third period was a real struggle and after over three minutes of play the Capitals had added 4-points while the Flyers had yet to score. An unsportsmanlike foul called on Bec Cole (her 4th foul) with 6:44 remaining in the period certainly changed the game, the Capitals completing a 12-0 run to take the lead with 5 minutes to play in the period. The Flyers first score since half time, with 4:46 remaining, put them back in front and it was game on with the lead changing hands in the last few minutes of the period. At the final break the Flyers were 2-points down, 54-56.

The final period was a fitting grand final battle. The Flyers displaying great spirit to come back from a 7-point deficit to regain the lead with 2-minutes to play. In the desperate last two minutes of the season, the Capitals added 4-points while the Flyers were unable to add to their total for another tough loss, 68-71.

While it was a disappointing end to the season, there were many positive that came out of the Flyers very first season in the WNBL. Finishing the regular season on top of the ladder with a 17-4 record and enjoying an exciting semi-final series win against Adelaide (both 3-point games) were part of the highlights of 2019/20.

In sport it is hard to make the Grand Final and even harder to win the Championship and that is why when you get to the big dance you want to win. For the Flyers it wasn’t to be, however the spirit displayed by the team and the strong culture that has been built in a such a short time, ensures we can look forward to an exciting 2020-21 season.