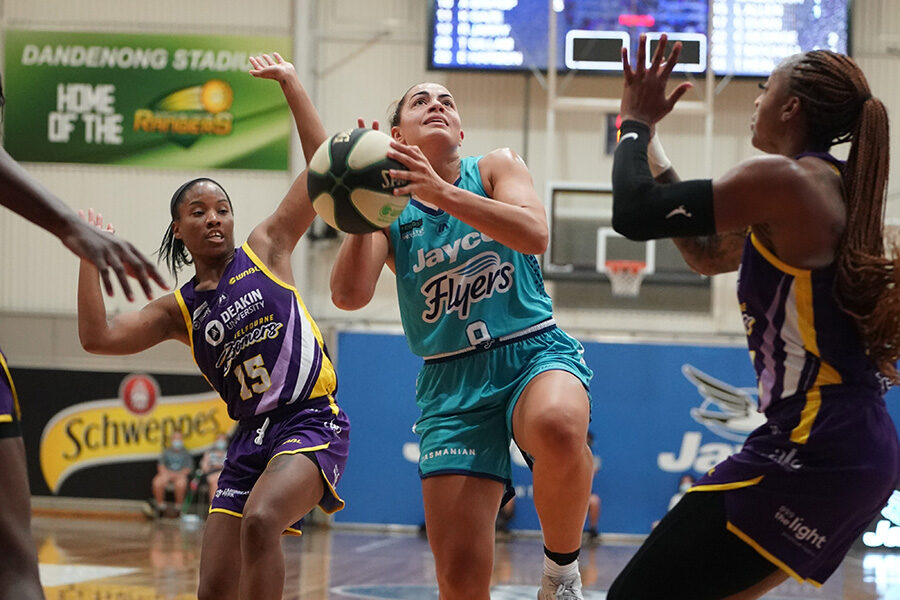 The Flyers Family were likely feeling a bit of deja vu after our Round 3 clash with the Melbourne Boomers, falling by double-digits to our crosstown rival for the second week in a row.

The rematch started out in a more promising fashion for our Southsiders, getting out to an early 21-11 lead thanks to some tough, physical drives by Bec Cole who was on fire from the tip. She notched up 12 points at that stage and sat for her rest at the 2:32 mark of the first quarter. But from that point the Boomers came through like a tidal wave as they rallied back late in the quarter to be down only two points at the break.

They then re-established their gameplan from the previous week with import guard combo Allen and Mitchell working to get to their spots on offense. We also struggled to contain the play of Cayla George who rebounded after a middling performance in Round 2 to give our Flyers headaches on defense, scoring 25 points and crashing the glass for 12 rebounds.

For the Flyers it was Bec Cole and Abby Bishop once again leading our offense with both working hard to get good looks and driving their way to the free throw line. While each star played well they were unable to pull their Flyers teammates along with them as the team turned the ball over 21 times on the night and shot just 4-16 from 3PT range. These turnovers led to easy Boomers points and likely the victory, using these easy baskets to hold a double-digit margin until the final buzzer.

But these early stumbles are to be expected. With a number of new players in important roles the team appears to be still finding their feet and will likely be able to gel faster over the Christmas break. Once that chemistry is built on the training track and in more games watch out Flyers fans, this will be a tough team for the rest of the WNBL to deal with.

However before that holiday break we’ve got one more game, an exciting Christmas-themed clash with the Townsville Fire! We’ll be welcoming in the North Queenslanders into Dandenong Stadium for what should be a thrilling Round 4 game, tipping off at 7:30PM. Tickets are available now so be sure to click the link below, find your Santa hat or reindeer antlers and get ready for the Flyers to bring some Christmas cheer on the court this Thursday!