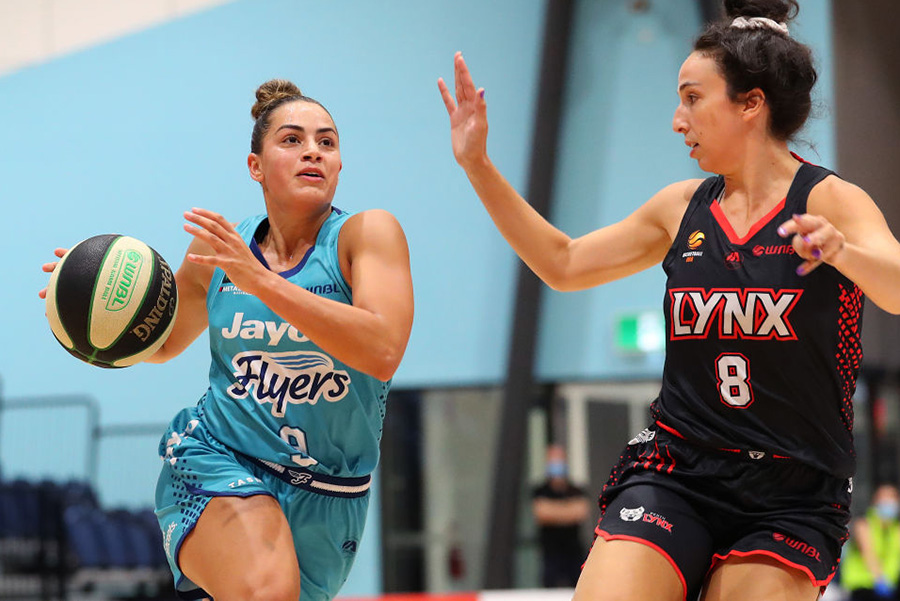 After a Christmas, a New Year break and some postponed games, the Flyers finally took the court again vs Perth Lynx in Ballarat as part of the 15 games being played in regional Victoria.

Trading buckets all game and ending up in a thrilling overtime finish, the Flyers fell just short going down 79-83 at the final buzzer.

The bench for Southside provided great help in the game. Kristy Wallace ended the game with 16 points, 4 rebounds and 3 steals. Bec Cole continued to make an impact with 13 points and 8 rebounds and Sara Blicavs top scored with 21 points.

Both teams took some time to shake off some rust in the first quarter with missed shots going both ways. Abby Bishop started the Flyers off on scoring but the Lynx soon took an early lead with some assertive buckets from the Lynx’s Lauren Scherf.

The Flyers got rid of their rust as well in the first, creeping back in with bench substitutions giving a new wind of energy. Kate Gaze had two nice threes to even up the scoring and Kristy Wallace was tenacious on the defensive end against Lynx star player Marina Marbey. The Flyers went in to the second quarter up 21-15.

Wallace kept her momentum going in the second quarter, adding to the scoreboard first and starting a Flyers run with added points from Maddy Rocci and Rachel Jarry. The Lynx didn’t fall back easy as Sami Whitcomb and Scherf continued to be aggressive and cut the lead where they could.

Blicavs entered herself into the game nicely this quarter finishing the half with 11 points 2 rebounds and 1 block, including 2 3 pointers in the 2nd quarter. At the end of the first half the scores were close to even with the Flyers having the 44-42 lead.

The second half started with a bang after four consecutive 3 pointers from both teams, finding it hard to miss. The rest of the quarter followed suit as both teams traded buckets and worked hard offensively with some lovely team work on each end.

Blicavs continued to dominate but got into some foul trouble and was taken out of the game with five minutes to go in the third to preserve her for the last push. Once out Wallace stepped up in the scoring for the Flyers again adding to the team’s bench points which were a stand out all game.

The Flyers ended 3 quarter time with a five-point lead but it was still anyone’s game with the intensity being played.

Stealing some early baskets and coming out in fine form, the Flyers took a seven-point lead before the Lynx import Jackie young asserted herself into the game on the scoring end. Then followed along by Scherf and Whitcomb who had been cutting back the lead all game.

Southside kept fighting the whole game with their deep bench and with 3 minutes to Blicavs hit a timely three pointer setting the score to 77-74 which would be the last Flyers bucket for that quarter.

The intensity was obviously high on the floor with both teams struggling to make plays and pull away on a lead. With 10.3 to go the Lynx scored a clutch three and sent the game into overtime.

Overtime proved to be just like the last three minutes of the fourth quarter as it wasn’t until Maddy Rocci scored a basket with two minutes to go that a score was made. Unfortunately for the Flyers this was also their last bucket of the match with the Lynx scoring six more points to help give them the 83-79 OT win.

While this was a tough loss our Southsiders still have a chance to get on the winner’s list in Round 7, taking on the Melbourne Boomers at MSC Parkville this Saturday night. We know the Flyers will be pumped up for this clash and we can’t wait to see them rebound against our fierce rival!