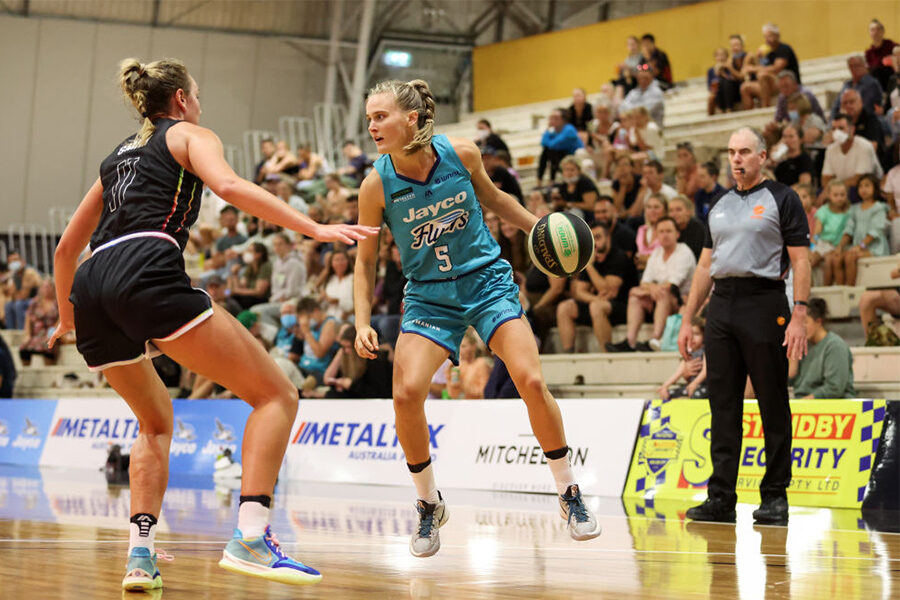 The Southside Flyers and Adelaide Lightning both were both hungry to add a W to their record last night, with both teams coming off consecutive losses. Unfortunately, it would be the Lightning to run away with the victory and leave the Flyers still searching.

The Southside Flyers were back in Dandenong Stadium after a few weeks away from their home-court. Opals stars Kristy Wallace, Maddi Rocci and Sara Blicavs and Coach Cheryl Chambers were also back with the team, fighting off their Serbia jetlag.

It was the first time the team looked like it was back to its previous line-ups, minus Abby Bishop and captain Jenna O’Hea. The Flyers were glad to be back together on court and that showed through the battle of the game even when things looked out of reach.

Maddy Rocci opened the game with a bang as she scored a three within the first ten seconds of the clock ticking down. Alaana Smith would shortly answer for the Lightning, getting her first bucket while also battling Serbia jetlag.

The Flyers shared around the ball well in the first quarter with seven players getting points on the scoreboard. Kylee Shook from Adelaide would match the Flyers buckets as she put up seven points and levelled out the scores at the end of the first, 24-24.

Emilee Whittle-Harmon again stood up in place of Abby Bishop last night. She showed her crafty post moves as she hit a reverse lay-up thanks to a Maddy Rocci assist to get the Flyers rolling in the second quarter. Alanna Smith continued to dominate inside as the Lightning hit their first solid run and crept 11 points away.

It wouldn’t be long until Aimie Rocci fired back to cut the lead and added to the Flyers 45% three-point shooting half. Kristy Wallace came with intensity on defence and captured a steal with less than a minute to go which lead nicely to a Bec Cole lay-up finish, leaving the Flyers down five at the half, 46-51.

The Flyers needed to get their own uninterrupted run going to take down this deep Adelaide team in the second half and Sara Blicavs knew this. As the shot clock buzzer sounded she drained a three ball within the first minute of the third. This quarter belonged to Adelaide though as they built a solid buffer led by import Kiana Williams.

It is never say die with this Southside squad as they went on a 10-0 run in the last 2 minutes before the last break, ending the third quarter 62-68.

The game was kept tight thanks to buckets from Cole and Harmon but the Flyers would be unable to score in the last 3:32 minutes, allowing Adelaide to finish off the game with the lead they had created in the previous quarter.

Cole top scored for the Flyers with 17 points and 4 rebounds. Alanna Smith tracked a double double for the Lightning with 23 points and 10 rebounds.

Southside Flyers will now head south as they undertake a two-game road trip in Tasmania, battling the Bendigo Spirit in both match-ups. You can watch all the action on ABC, Fox Sports and Kayo Sports this Saturday February 26th at 7:30pm AEDT.

Still plenty to fight for in WNBL 2021-22 get behind your team Flyers Family!