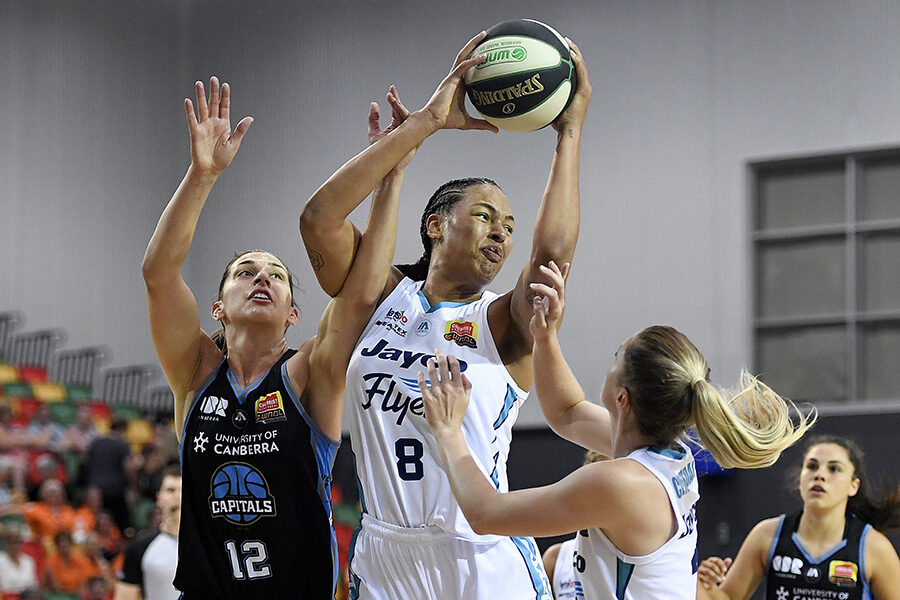 Southside Lock In WNBL Top Spot After Win Against Canberra

Title favourites the Flyers appeared to receive a body blow to their championship hopes when news broke that O’Hea had not only been ruled out of Sunday’s regular season finale in Townsville but may be lost for the finals after suffering a suspected MCL knee injury.

However, the star-studded Flyers (11-2 record) still cruised to their seventh straight win to seal top spot on the WNBL ladder and a double chance of reaching the Grand Final.

The Flyers booked a major semi-final clash with second-placed JCU Townsville Fire on Wednesday night at Townsville Stadium, with the winner qualifying for the December 20 season decider.

The stage was set for a WNBL blockbuster on Sunday with the Flyers lining up against the Capitals in what was not only a grand final re-match but also a clash to decide top seed for the 2020 Finals Series.

The match didn’t disappoint with the Flyers’ deep roster stepping up without O’Hea to overcome a determined Capitals thanks to a remarkable three-point shooting display (18 from 29 at 62 per cent).

Still smarting from their 23-point loss to the Capitals on November 23, the Flyers came out swinging from the outset with Opals guard Bec Cole setting the early tone before finishing with an equal game high 23 points (5-7 from long range) along with eight assists.

“We had something to prove after we last played them,” Cole said.

“But we have grown and set the bar higher and higher each week and we were ready – it’s finals time now and we are raring to go.”

There was no shortage of Flyers standouts in O’Hea’s absence.

Superstar Liz Cambage overcame a quiet first half to finish with 18 points and 12 rebounds while O’Hea’s starting five replacement Aimie Clydesdale (13 points and six assists) and Opals Sara Blicavs (16 points) and Leilani Mitchell (14 points – all in the first half) stood tall.

Flyers coach Cheryl Chambers had not given up hope on their skipper featuring in the finals.

“It’s a day by day type thing so we will sit back and see how she is,” Chambers said of O’Hea.

The Capitals (9-4 record) were relegated to third spot and a knockout Wednesday semi-final clash with Deakin Melbourne Boomers.

For the Capitals, Opals centre Marianna Tolo had 23 points and rookie sensation Jade Melbourne 12 points, but eyebrows were raised when captain Kelsey Griffin (11 points) spent the majority of the second half on the bench.

“I thought they shot the hell out of the ball, credit to them. That was the difference,” Capitals coach Paul Goriss said of the Flyers.

“But I think in the final four any team can still take this out.”

The Flyers made the Capitals pay for a 6-1 turnover count to claim a 29-22 lead at the opening break.

The Capitals trailed by 16 in the second term but cut the deficit to one point at one stage and just 49-45 by halftime.

However, the Flyers never relinquished their lead during the match, blowing the deficit out to 81-64 by the final interval.