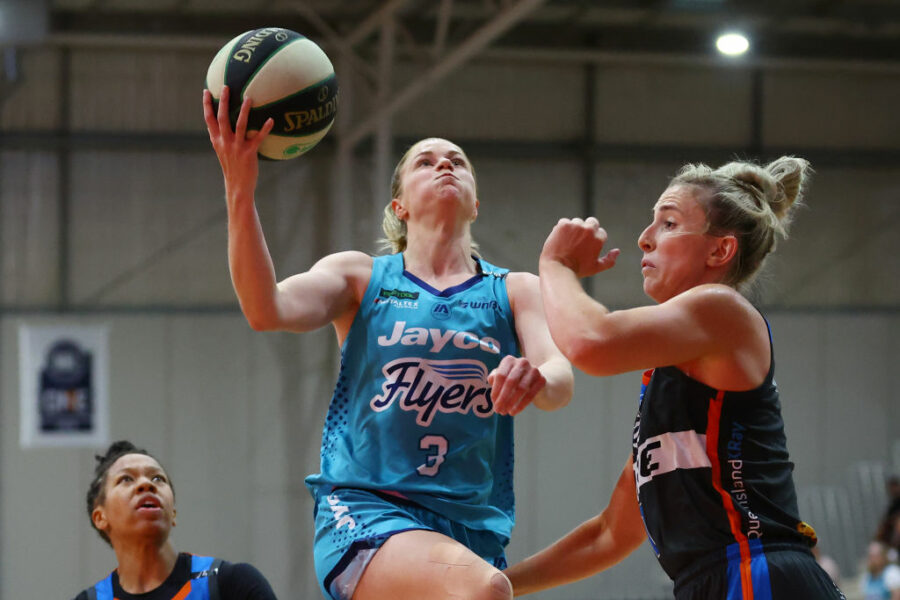 Yesterday’s game was originally meant to be played last night but due to extreme heat it was rescheduled to Sunday, but this clearly made no impact on the Flyers as they brought some heat of their own en route to defeating Townsville on the road.

Last time these two teams matched up it was a comeback victory for the Flyers but this time there was no chance of Southside ever falling behind. The Flyers ended up with six of their players in double figures and three of those figures were over the 20-point mark.

The game started out strong for the Flyers with Emilee Whittle-Harmon dominating down low and providing great inside work in the absence of Sara Blicavs. The three’s started to pour in as Maddy Rocci, Jenna O’Hea and Kristy Wallace all got their own.

At the end of the first the lead was up to 15-points which would create a buffer for most of the game. Jenna O’Hea, in her 2nd last WNBL game, started the second quarter off with seven straight unanswered points. The Fire did continue to assert themselves in the game despite being down as Steph Reid at the point enabled offensive movement for Tonwsville throughout the content.

But no matter what the Fire on defense they could not extinguish the shooting game the Flyers had as they recorded eight threes in the first half shooting at a clip of 72% from the arc.

In a difference to their previous games the Flyers only recorded eleven turnovers all game and five in the first half which set them up to have a very comfortable 58-37 lead at the half. A team should never be underestimated though and the Flyers knew they had to keep their foot on the accelerator.

The impressive shooting game persisted for the Flyers in the second half as they continued to get teammates open and keep perfect form. Bec Cole, who is now leading the league in three-point percentage, showed us how to shoot it in the third quarter as she shot four of her own in that quarter alone.

Southside looked like they were having fun out on the court today and that was something so enjoyable for our Flyers family to watch considering it was the first win since the month of January. O’Hea finished with 21 for the night after she impressively went five from five at the 3-point line.

Let’s hope we carry this fine form into our last game of the season as we take on the Adelaide Lightning this Saturday at 7pm! Make sure you tune in to support our Flyers one last time, its time to end the season with a BANG Flyers Family!