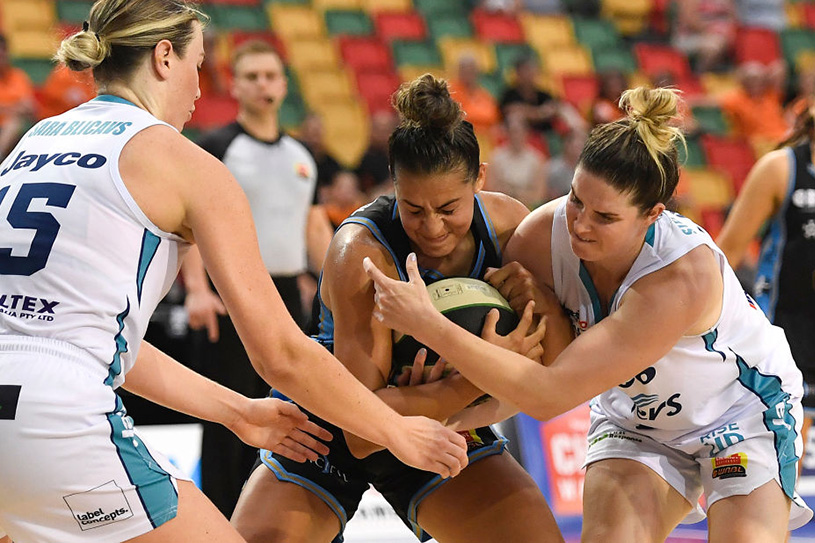 Tale Of The Tape: Finishing The Regular Season With A Bang

The Southside Flyers finished their regular season with a bang, beating Sydney on a late go-ahead 3-pointer from Sara Blicavs and taking down the reigning champion Capitals 101 – 82. Here’s an in-depth look at how the Flyers managed to lock up the No. 1 seed going into the WNBL Finals this Wednesday.

In a game where buckets were hard to come by, the Flyers pulled off a late comeback victory behind Sara Blicavs’ hot shooting, defeating the Sydney Flames 81 – 77. Southside struggled to find the bottom of the net in their half court offense, producing less than a point per possession (PPP) at 0.843 PPP. However, Southside found some success through the always dependable Liz Cambage down low, who was able to dominate in the post yet again. The Flyers scored 16 points on the 10 possessions that ended with a Cambage low post up, good for 1.60 PPP.

Despite struggling on the offensive end of the floor, Southside were locked in on defense. The Flyers prevented Sydney from finding easy looks at the hoop, giving up just 0.500 PPP in transition, while also preventing open spot up 3-point attempts. Because of the pressure on their shooters, the Flames shot 23.5% on 17 spot up 3-pointers, well below league average.

In the half court, the Flyers completely took away the Sydney pick and roll game. Despite ending 35 possessions with pick and rolls, the Flames scored just 0.714 PPP. That number drops even lower when the Flyers went to a switching defense, down to 0.625. Aimie Clydesdale in particular was deadly in these sets, pressuring ballhandlers to take her opponents out of rhythm. The Flames were limited to 0.429 PPP in the 7 pick and rolls they attempted vs a Clydesdale switch.

Southside surely would not have been able to pull off the comeback without Bec Cole on the court. The Flyers were a completely different team on both ends of the floor with Cole playing, scoring significantly more points per possession, and giving up significantly less. Leading the way by attacking the basket, Cole led the Flyers to 1.014 PPP, which dropped all the way down to 0.500 when she sat. Impressively, Bec had a nearly identical impact on the defensive end of the floor, with the Flyers giving up 0.405 PPP less when Cole was in the game.

Zoning out the Capitals

In their earlier matchup this season, the Capitals were able to wear down the Flyers by forcing the ball down low. Canberra did most of their damage that game in the paint, helping them secure a double-digit victory. Head Coach Cheryl Chambers made sure the Flyers did not see a repeat performance the second time around, taking the Capitals away from their strengths by going to a 2-3 zone for most of the night. With Aimie Clydesdale in the starting lineup at the top of the zone alongside Leilani Mitchell, the 2-3 had an immediate impact on the game, helping the Flyers burst off to a 24-6 start.

The 2-3 also helped the Flyers cover the opposition’s guards, who were able to attack the paint freely in their first matchup. By having two point guards in Mitchell and Clydesdale running around at the top of the zone, Southside produced an excellent 80.70 defensive rating. This was worse in single point guard lineups, with the Flyers seeing a 93.33 defensive rating with just Mitchell, and a 88.00 with just Clydesdale.