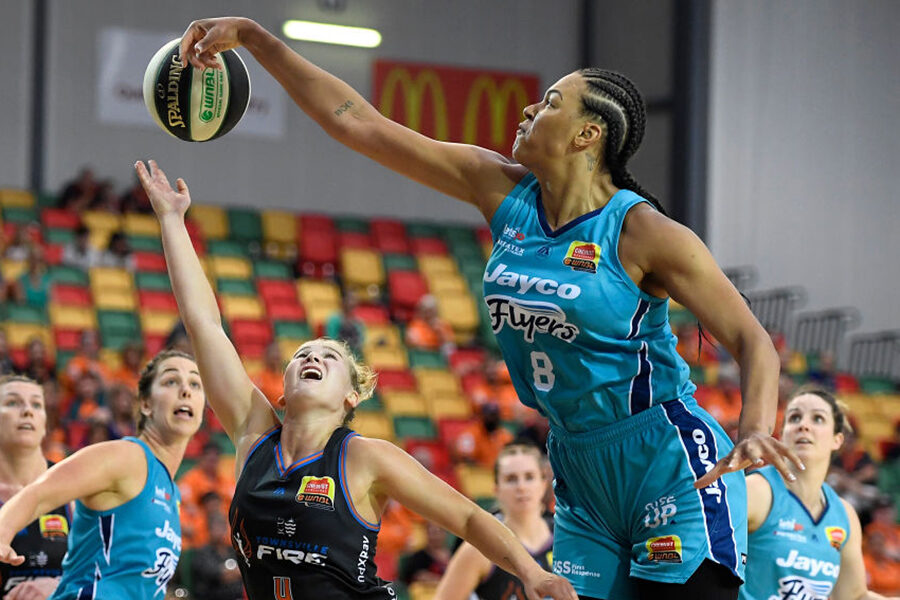 Tale Of The Tape: Flyers Cruise Through Round 2

The Southside Flyers went undefeated in WNBL Round 2, winning against the Townsville Fire 101-89 and the Perth Lynx 117-71. Here’s and in-depth statistical look at how the Flyers were able to win by such large margins.

After missing most of the previous game due to early foul trouble, Liz Cambage decided to host her own block party in the paint to make up for it, with practically the entire Townsville Fire roster invited. Cambage was credited with a massive 6 blocks, which doesn’t even include 2 more layup attempts that Liz arguably got a hand on and didn’t even reach the top of the rim. There was simply no challenging Cambage at the hoop, where she blocked an insane 44.4% of the shot attempts against her.

Cambage was also able to shut down all 3 post up attempts against her, and put up the lowest points per possession (PPP) against drives on the team at 0.667. After Liz challenged the shot, she was usually there to clean the glass, grabbing 13 defensive boards while being the only starter to lead the Flyer’s to a higher defensive rebounding rate with her on the court compared to her on the bench.

The Flyers’ looked to reward Cambage’s defensive dominance by feeding her the ball in the low post, to tremendous results. Liz torched Townsville with a variety of post spins and up-and-unders to create easy layup attempts down low. However, she wasn’t just looking to score herself, often dishing out a quick bounce pass through traffic to a cutter for an easy bucket. When Southside finished their 7 possessions by posting Liv on the block, they scored 14 points, good for 2.00 PPP.

Even when she was posting, Townsville could not stop Liz from scoring. Cambage produced 1.73 PPP on her 15 shots in the paint. She was able to score in variety of ways to keep the defense off balance, even taking the ball off the dribble from the perimeter and blowing past her defender multiple times.

After trailing at the end of the first quarter, the Southside Flyers came out looking to cause chaos in the Perth backcourt. The Flyers were able to pressure the Lynx guards the entire length of the floor, forcing wayward passes and simple ball handling mistakes. Southside were able to generate 23 turnovers, 17 of which were steals. This allowed the Flyers to create 16 transition opportunities through just the first 3 quarters, where they scored an impressive 1.50 PPP.

Aimie Clydesdale set the tone for the Flyers’ defense in her first possession on the court, stealing the ball in transition. Aimie would go on to that 3 more times for Southside, using her pressure to force Perth into turnovers on nearly 31% of their possessions with Clydesdale on the floor in the first 3 quarters.

Meanwhile, Jenna O’Hea was reading the passing lanes grabbing 4 steals of her own, striking on the slow lob passes from Clydesdale’s pressure. All those turnovers saw the Flyers ahead by 30 points at the end of the 3rd, allowing them to show off their roster’s depth to close out Perth in the 4th.