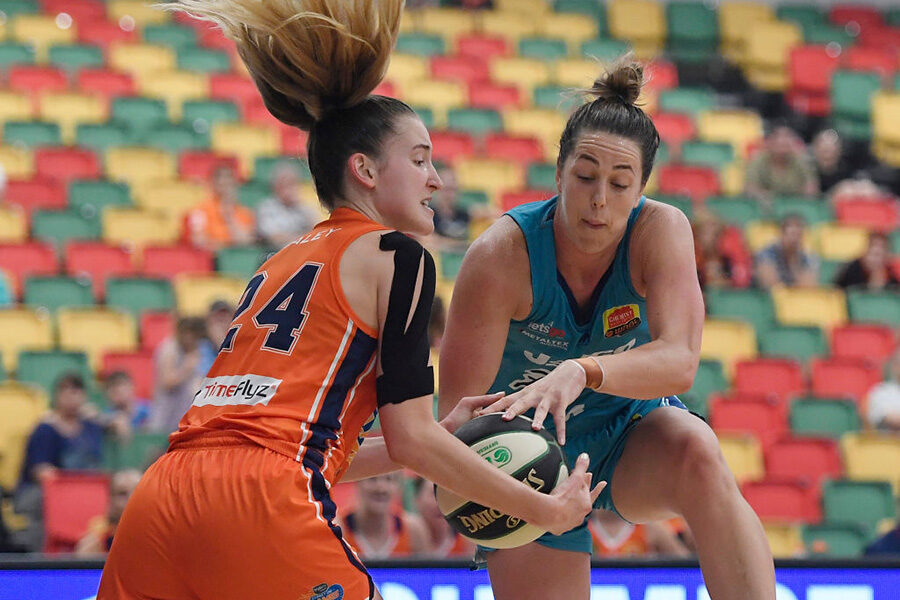 Tale Of The Tape: Flyers Too Hot For Flames To Handle

The Southside Flyers proved to be too hot to handle for the Sydney Uni Flames on Sunday, winning 99-72. Here’s an in-depth statistical look at how the Flyers managed to pull off an impressive win.

On the second day of a back to back, Southside was able to find success by slowing down the tempo and establishing their half court offensive sets. Behind the leadership of Leilani Mitchell and Jenna O’Hea, the Flyers produced more points per possession (PPP) the further into the shot clock they went, as shown in the table below:

Leilani led the way in the half court sets as the primary playmaker, navigating through traffic to find open teammates. With Mitchell on the floor the Flyers assisted on 80.65% on their made baskets, compared to only 53.33% without her. Mitchell was particularly deadly when running the pick and roll against an opposing big wanting to hang back in the paint. She often used this to create a quick perimeter jumper for herself or her team, generating 1.500 PPP in these situations.

Jenna O’Hea thrived as a secondary playmaker on the wing, serving as a quick facilitator to throw off Sydney’s second and third defensive rotations. Her ability to quickly make the proper read on swing passes carved up the Flames and pushed her to 8 assists. Southside saw a similar drop in assist number without O’Hea, falling to a 60.00% assist rate from an 80.77% rate with her.

With star center Liz Cambage only able to play under 9 minutes due to foul trouble, Bec Cole took over as the number 1 scoring option for the Flyers’ attack. The Flames simply had no match for Cole, who was deadly from all over the floor. Bec could not miss a jumper, going 3/4 from mid-range and 4/5 from downtown, including 4/4 on spot up 3-point attempts.

Cole wasn’t just deadly from the perimeter; she torched the Flames taking the ball to the hoop too. When a possession ended with Cole driving to the rim, the Flyers scored an impressive 1.429 PPP. The Sydney defense had was forced to pick their poison by committing to stopping the red-hot three-point shooting and risking a blow by, or giving her the open look to try to stop her from attacking the rim. This dilemma proved fatal for the Flames, as shown by the Flyers scoring 0.47 PPP more with Bec in the game, almost a point every other possession extra.

After succumbing to a 3-point barrage the day before, the Flyers clearly were focused on taking away the 3-point line vs Sydney. After allowing Melbourne to hit 53% of their spot up jumpers, Southside clamped down on the Flames’ shooters, giving up on 25% shooting on spot up attempts. Every player made a concerted effort to get out to shooters, forcing shot attempts to be more difficult.

The sister-in-law duo of Sara and Steph Blicavs were particularly locked in on the defensive end of the court. When they were guarding the opposing shooter, Southside only gave up 0.500 and 0.583 PPP for Sara and Steph, respectively. Newcomer Rachel Jarry saw similar success, giving up 0.500 PPP.