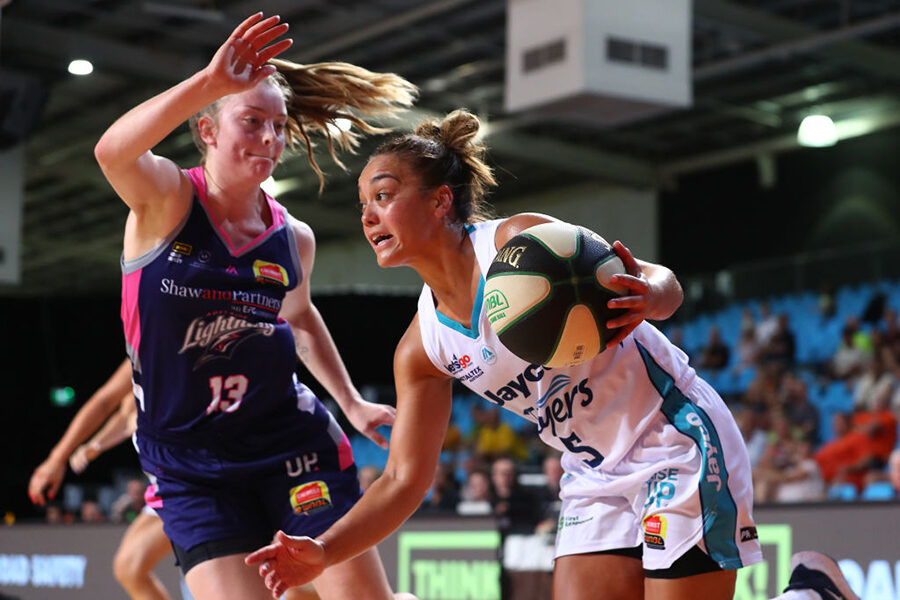 Tale Of The Tape: How The Flyers Bounced Back After Canberra Loss

After getting off to a slow start in WNBL Round 3 against the UC Capitals the Flyers bounced back with three straight 20+ point wins in the Queensland bubble. Here’s an in-depth statistical look at how Southside finished Round 3 with an impressive 3-1 record.

Scoring Woes vs the Capitals

In a Grand Final rematch, the Flyers fell to the defending champions 72 – 95, equaling their lowest scoring total for the season. Easy buckets were hard to come by for Southside, who were not credited for a single fast break point for the game. To make matters more difficult, 3-pointers were simply not dropping for the Flyers, who shot only 22% on 18 attempts.

Canberra was able to swarm the ball by using a switching system, holding the Flyers to 0.688 points per possession (PPP) in the pick and roll. While most of the team struggled, Jenna O’Hea was able to use her versatility as a wing playmaker to torch the Capitals in these situations, producing a scorching 2.330 PPP as the screener vs switches.

Despite the team’s challenges on the offensive end, the Capitals couldn’t slow down Liz Cambage down low. Cambage was her usual deadly self in the paint, feasting at the rim for 1.467 PPP on 15 possessions. In fact, most of the scoring problems for the Flyers occurred when Liz went to the bench, where they scored a team low 0.730 PPP without her.

Soaring Past the Lynx

Southside bounced back in huge way in the following game vs Perth, cruising to a 102 – 62 victory. The Flyers were creating open looks with ease from the opening tip, with all 19 of their 3-point attempts in the first 3 quarters coming from the catch and shoot. The ball was pinging from side to side, helping Southside make 10 (53%) of those looks. More easy looks were created out of the pick and roll, where the Flyers scored 2.286 PPP on 7 attempts through 3 quarters. That’s more than a bucket per possession!

Just like their first encounter with the Lynx, Southside pressured the Perth guards into making numerous mistakes. Perth turned the ball over on nearly 1/3 of their possessions in the first 3 quarters, and that number shot up to 37% when Aimie Clydesdale was in the game, and to 39% with Steph Blicavs. Perth was unable to get the ball through the hoop when Clydesdale was in the game through 3 quarter time, scoring a brutal 0.488 PPP.

Burning the Fire in Inside

In what was an extremely physical contest, the Flyers managed to take down the Townsville Fire 94 – 70. The difference maker for Southside was their ability to score the ball inside, where the smaller Fire squad didn’t have any answers. The Flyers scored 1.425 PPP on 40 shot attempts in the paint, seemingly able to ignore all of Townsville’s shot contests.

The Flyers kept the Fire off balance by attacking the rim in a multitude of ways. Liz Cambage was a walking bucket down low, creating 2.100 PPP on 10 possessions ending with her getting a touch in the low post. Southside was once again deadly in the pick and roll game, scoring 1.444 PPP on 18 attempts. Bec Cole used the pick and roll masterfully, creating driving lanes for herself. On the 10 plays ending with Cole driving to hoop, Southside scored 1.700 PPP.

Striking Quickly vs the Lightning

Southside continued their hot form against the Adelaide Lightning to close out round 3, winning 110 – 79. The Flyers’ huge scoring total was fueled through their transition game, giving the match a high tempo, run-and-gun feel. The Flyers took advantage of their 19 transition possessions, scoring 1.421 PPP. Adelaide couldn’t keep up the pace on the other end of the court, failing to register a single fast break bucket.

When Southside wasn’t able to push the pace, Leilani Mitchell was able to control the flow of the game in the half-court. Mitchell conducted a masterful performance in the pick and roll, picking apart the Lightning defense for 1.412 PPP.

In what was a re-occurring trend this round but was too impressive not to mention, Liz Cambage dominated the paint yet again. She produced (what is somehow starting to feel average for her) 2.333 PPP on her 9 shots in the paint. That crazy number means she not only scored on all her shot attempts in the paint, but she converted multiple and-1’s too.